From, as a starter at defensive end under the tutelage of defensive coordinator Jim Schwartz, Kyle Vanden Bosch averaged nine sacks, three forced fumbles and 56 tackles. It should come as no surprise then, that Schwartz, now the head coach of the Detroit Lions, was at his home at am ET, Friday March 5th, when NFL free agency officially began.  Vanden Bosch struggled last season in his first professional year without Schwartz’s help, so it should also come as no surprise that he ultimately signed a four-year, $26 million contract to play for Lions. Schwartz called Vanden Bosch a “big-time player” and he will join what should be a much improved defensive line that includes newly-acquired Corey Williams and likely Gerald McCoy or Ndamukong Suh from the draft. Fresh off his signing with the local team, Kyle Vanden Bosch joined Shep and Sharp on WDFN in Detroit to discuss Jim Schwartz showing up at his house, why he chose to sign with the Lions, his declining sack totals in recent years and Ndamukong Suh. 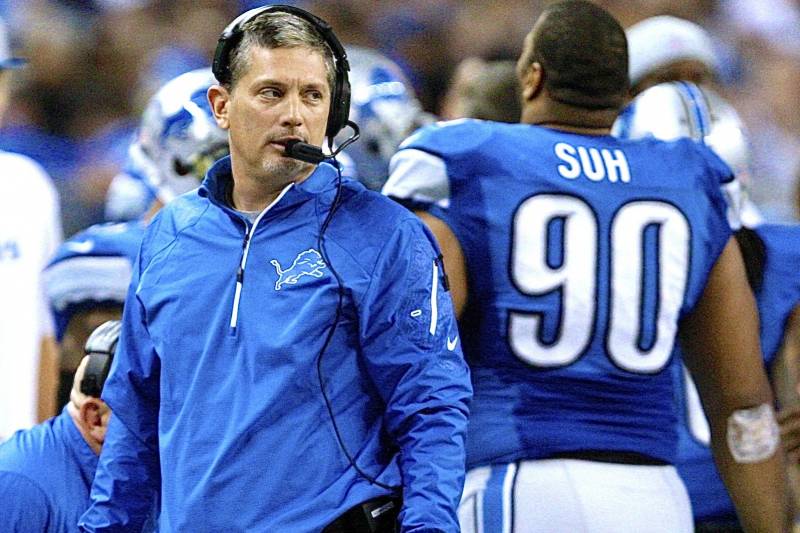 On Jim Schwartz in his driveway:

“I was shocked. I was gearing up all day waiting for – it was  my time – waiting for phone calls to see what we were going to do. My wife was up with me watching the Real Housewives of Orange County or something. Coach Schwartz called me right at and said, ‘I’m a block from your house. Can you give me a minute?’ He had sent me a text that I missed about a minute before that that said, ‘I could be anywhere right now, but I’m coming to talk to you because you’re the guy I want.’ That right there meant a lot to me and basically set the tone for getting the deal done this morning.”

“It was a combination of things. I had a lot of doubts and had a lot of questions. Speaking with Coach Schwartz and hearing his optimism and his plans for the off-season, I got excited. Having played for Coach Schwartz, I have ultimate faith in him. It can be incredibly gratifying to be a part of something special and to be a part of a turnaround. I think that’s the way we’re headed. I just got excited talking to him. Maybe the most important messages that he brought to me was that he said, ‘first and foremost, we believe you are still a great player and that’s what we want you to be.’ That’s what I want to be. I want to be able to be put in situations where I can succeed and be placed in a position to help the Lions succeed. He could have gone anywhere. I knew the opportunities that were out there. I told my wife before free agency started that I think I can go to Detroit and help that team win. When he came, it was about selling his philosophy and selling the city. He showed up at 11:00 and I was expecting phone calls. And I turned my phone off and didn’t answer any calls from my agent until about 2:30 in the morning. That’s what I needed and what my wife needed to answer a lot of questions and address some of our fears.”

On other moves made today:

“Coach Schwartz is a smart man and he knows what areas that need to be built. We talked about the direction we were heading and the moves he wanted to do specifically and generally. He wants the defensive line to be the strength of the defense and build from there. He told me about the success of last year’s draft and the young players that he believes we can build around. I’m excited about meeting my teammates and getting this thing going. I believe we can win some games next year. Nobody expects too much. I think we can open some eyes.”

“I saw him in the spring game two years ago and any chance I got to watch him this year. For a young kid, he uses his hands better than any college kid I have ever seen. He instantly locks out guys that are 350 pounds and just sheds them. He’s got a good feel. He’s a football player. He’s a physical specimen, but he’s a football player. He makes plays. He sheds and escapes and he’s always around the ball.”

On why his sack total went down the last two years:

“I don’t know. Two years ago, I had four-and-a-half sacks and tore my groin in the fourth game and battled back the rest of the season and then ended up having surgery in Week 14. Last year, you know sacks are funny. Some years you get them and some years you don’t. I can’t explain it. It’s something that you continually work on and you take a lot of pride in your sacks, but you can’t get frustrated by it. I believe my best years are ahead of me. I continue to study the game of football and try to perfect pass rush moves. I can’t fully explain why my sack totals were down last year, but I fully expect them to be back up next year.”