John Calipari Has Nothing Negative to Say About Bob Knight

John Calipari has had a tremendous level of success at the collegiate level.  He has done just about all a coach can do with the exception of winning a National Championship.  Despite all his success at the collegiate level and there has been a ton for Calipari, there have been some that have questioned his integrity and whether he is doing things the right way.  There was some controversy with one of his former players, Marcus Camby at UMass and now there is also controversy at Memphis as the Tigers had their entire 2007-2008 season vacated because of issues with Derrick Rose.  Recently, one of the greatest coaches of all-time, Bob Knight had some words about John Calipari and they were not favorable.  Bob Knight was at a fundraiser and said “We’ve gotten into this situation where integrity is really lacking and that’s why I’m glad I’m not coaching.  You see we’ve got a coach at Kentucky who put two schools on probation and he’s still coaching. I really don’t understand that.” 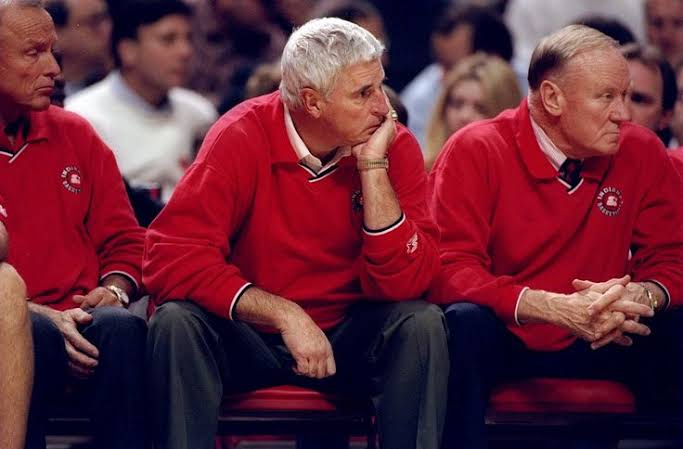 Wow, harsh words for Calipari coming from one of the best coaches in college basketball history.  Now, I don’t agree with Knight in the sense that Calipari shouldn’t be coaching, but I think the NCAA should certainly penalize Calipari more than punishing the kids at the program or the program itself.  It happened under his watch and it has happened twice.  Both times, the program and the kids felt the effect of it, not Calipari.  However, that is more of an issue with the NCAA as opposed to John Calipari himself.John Calipari joined ESPN 1070 the Fan in Indianapolis to talk about Bob Knight’s comments about his coaching integrity, whether or not he plans on calling Knight and discussing this, and why he thinks Knight made the comments he did.

On whether or not Coach Knight is trying to hurt the Calipari in recruiting:

“Ummmmm. I don’t think so.  I don’t think he can do it.  Maybe, but I don’t think so.  I was a little bit surprised and the one thing that I said today is that I respect him, I always have.  I took my staff down to Texas Tech, watched them practice, he helped me with the dribble-drive, we went to dinner after and so I was surprised at what I saw.  I’ll tell you what Eddie, it doesn’t change how I feel about him.  I respect him as a coach, talk about the great ones, the John Woodens, Adolph Rupps, and Bob Knights.  Those are the best of the best.”

On why he thinks Knight made those comments:

“I don’t know, you’d have to ask him, but I’ll tell you this, I just got out of the shower, and we had a great practice today, one of the best we’ve had.  I am so jacked up about my basketball team.  We went to Indiana, and you have to give Tom (Crean) credit.  He has done such a great job of rebuilding and getting the players in place there at Indiana.  Coach Hall was with us at the game, he said I don’t know if I’ve ever been in a better environment by the fans and how they went after it and how they cheered their team, and it was a great environment.  Really an unbelievable win for our team.  Especially with the way Indiana started, it was incredible.  I didn’t think they were going to miss a basket the whole half.”

On whether or not there is any bad blood between the two:

“I don’t know.  I can just tell you that I respect him as a coach and what he’s done in this game.  The one thing that I’ve learned in my short life, I used to be the 35 year old coach, I’m now 50.  One of the things I do know is that you forgive and you move on because if you don’t and you hold it, you lose.  If you hold grudges and turn bitter and old, then you lose.  Whoever you’re holding onto ends up winning.  I’m doing the best job that I can.  Memphis is an appeal, Massachusetts never went on probation.  There was never probation for Massachusetts.  Some of the stuff was inaccurate, but at the end of the day, I really don’t care.  I’m coaching one of the best teams in the country and what I think is one of the best jobs in the country.  I’ve got great friends in this profession.  You saw that LeBron James calls me family.  Cal’s family.  Well I’ll tell you there’s a lotta people that say Cal’s in Kentucky and LeBron’s his boy and stuff is getting hairy.  I love it.  Bring it and let’s play ball.

Let’s throw it up and go.  I’ll tell you what.  What a place to work, what a great environment.  We got the greatest fans.  They’re crazy, these people are nuts down here, but they’re the greatest fans.  24 or 25,000 show up for every game and it doesn’t matter who we play.  We were down 18 in the first half against Miami of Ohio.  Six minutes to go in the half and never once was there a boo.  Never once was there anything except positive vibes coming from our fans.  It’s a great place to work and I love the rivalry against Indiana.  I wanna move it.  I wanna move it to Indianapolis and Louisville where it used to be where we split the fans and it’s an NCAA event.  It’s an NCAA environment.  I can’t tell you enough how much I think the job that Tom Crean has done.  This (Maurice) Creek kid is as good of a player that we’ve seen. (Christian) Watford as a freshman is going to be one of the best in their league.  Now he gets another recruiting class under his belt, you’re gonna see him take it to another level and another level.  He is the best of the best. ”

On whether or not he plans on calling Knight after these comments:

“I don’t know, I haven’t thought about it.  I might.  I have his cell number ‘cause like I said we have stayed in touch some.  I do have it and I may call him, but like I said I’m worried about coaching my team, getting this team better and I’ve been pretty good over my career about the distractions.  When I get on point of what I’m doing and what I’m coaching, you can try to throw stuff at me to see if you can get me off point to affect this or affect that, but in most cases it makes me a little sharper.  Makes me more on point of what I’ve gotta do and how I’ve gotta be.  Alright guys listen, my son has a basketball game tonight that his father has to get there and go watch.  I am outta here.  Eddie you are the man.  Anything I can do, you let me know.”