Some coaches, especially when faced with an underdog team against a superior opponent, like to build their players up, instilling the confidence in them that they are better than they are and can win against anyone. John Calipari is the opposite. He generally has one of the most talented teams in the country, yet prefers to keep them grounded and always gives off the impression that his team is flawed and not likely to win it’s next game. If that approach is to work now, Calipari will have to do one of his best sales jobs to-date as his Kentucky Wildcats have been the most impressive team in the NCAA tournament and are facing the worst remaining seed in 12 Cornell. With three likely lottery picks in next year’s NBA draft and a rotation that goes ten-deep, it’s hard to find flaws in the 34-2 Wildcats. UK won its first two tournament games over East Tennessee State and Wake Forest by 29 and 30 points respectively, averaging 95 points and shooting greater than 50% in both games with all five starters averaging double-digit points. Only John Calipari could find a way to get down on this team. John Calipari joined Mike and Mike in the Morning (with Mike Golic, Doug Gottlieb and Andy Katz) on ESPN Radio to talk about Cornell, preparation in the tournament, watching tape and reaction to the Kansas loss. 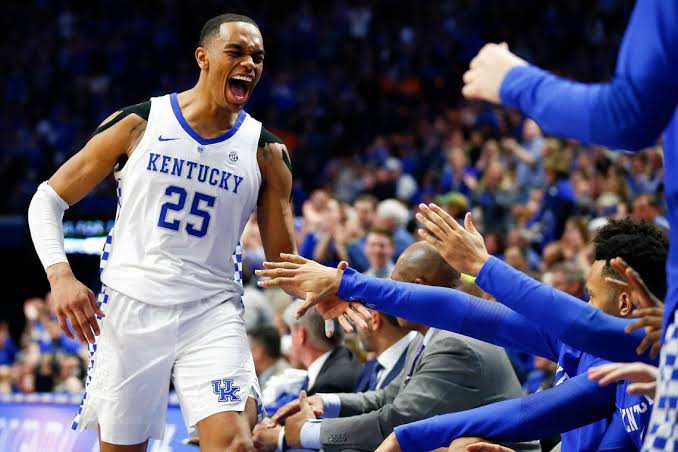 On playing against Cornell:

“It’s a road game. You know it. They’re 59 miles or 57 miles away. How about they win the league, the Ivy three years in a row. They are like the old Penn or Princeton teams. Third year in a row in the NCAA tournament. 8 seniors. This is a quality team that got the worst – the worst – seed in the tournament. I couldn’t believe it as a 12. But they’ve played their way into a four. They went from a 12 to a four because they played their way into a four.”

“I never tried to speed up Temple when we played Temple. Maybe we need to try to play a game that’s in the 50s. That’s OK too. You are talking about a team that leads the nation in three-point shooting at 43%. If you look at it, out of 300 something programs, they shoot the three better than 250 teams shoot the two. And that’s a scary thought. Their guard play is really solid. The big kid Foote is really, really good. He’s seven foot and you have to play him. They do pick-and-rolls and the do the handoffs. They come down and they say that they’re running their stuff. It doesn’t matter what you do. So you have to guard their stuff. The question will be too, how are they going to guard us? Will they sag? Will they play zone? Will they do what other teams have done and hold the ball and hope we don’t make threes? You never know. That’s why when you start the game, you have to say, ‘OK what are they trying to do here?’… This is one of those games that if they go out there and go 20-26. You know they have hit 20 threes in a game. If they go 20-28 from threes, it’s been a heck of a season for us. We’ve done great. I mean, you just go out and say that you’re going to guard their stuff. And if they’re making threes over guys hands and they’re stepping back making threes and you’re pressing them and they are shooting threes. It’s been a heck of a start and a heck of a finish and a heck of a season.”

On watching tape of other teams:

“The thing that I have tried to do, and I learned this from Larry Brown, is that I am more concerned about my team. I know how good they are. Our team respects every team we play because that is how we approach things. Morehead State and Murray State are just as important to us as North Carolina and Louisville. Every game matters. We don’t show much tape to our kids. We will show some, but there are not going to be hours of tape session. We’ll show them what they got to guard.”

And on reaction to Kansas game:

“It was just like WOW. And then you start thinking, ‘Is this going to happen to us today?’ See, the thing about the NBA, when you are best of seven, five, whatever it is, the best team is going to win most cases. It’s just how it is. But, when it’s one and done, one bad day, one game that you don’t think you have to play, one player gets in foul trouble, one player gets hurt, it’s different now. It’s over. Where you can get down 15-16 and come back, it’s a little harder in the tournament.”