Before the Tampa Bay Rays could even get to May, they were dealt a huge blow to their playoff chances. While he started off slow and wasn’t performing very well, the Rays went out this offseason and brought Manny Ramirez to Tampa for a reason. They did it because they wanted a bat in the lineup to protect Evan Longoria after Carlos Pena left for Chicago. Of course Manny Ramirez retired in the face of a 100 game suspension and it has left the Rays with a huge hole in the middle of their lineup. Tampa Bay still has a good, young pitching staff, they have a lot of young talent in their system, and they have won three straight games. However with the retirement of Ramirez and Longoria dealing with an injury, the Rays have a steep hill to climb in their defense of the AL East crown. Joe Maddon joined WEEI in Boston with the Big Show to talk about the three game winning streak the team is riding, how the retirement of Manny Ramirez has galvanized the team, why he made the comments the other day about not expecting an apology from Ramirez when he let the team down, and talks about the loss of Carl Crawford in the offseason. 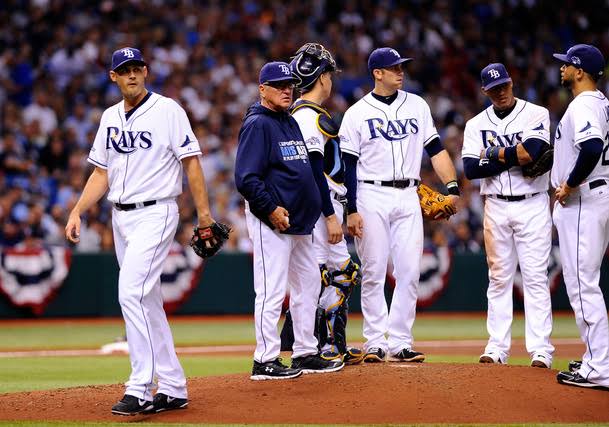 On the three game winning streak:

“Yeah it’s been nice to be able to rebound like we have. I just knew it was a matter of time before we started to hit. Really the bad start has been attributable to a lack of offense. We just have not been able to move the baseball. A lot of strikeouts, we’ve hit some balls relatively well, but a lot of weak contact. We had a good inning against the White Sox that’s how we came back and won, then the first night here against (Daisuke) Matsusaka. It’s nice to get back on the positive side. It does wonders for your confidence.”

“I think a lot of times when a perceived negative moment occurs within a group a lot of times the rest of the team will rally around that moment. I also believe at that moment you’re going to see a lot of guys elevate their game. In most situations it creates opportunities for people who otherwise wouldn’t have that same opportunity, for example Sam Fuld which happens to be working out in our favor right now. I said that from that perspective not in any way towards Manny in particular, that wasn’t my point. My point was that when you do get into that kind of moment it does gather that group together. When we went to the World Series in 2008 we had a lot of injuries. We had a lot of guys accelerate their game at that point. So when you lose a player of Manny’s abilities and stature, I just hoped and I figured we would draw from within. All of a sudden we’re seeing other guys pick things up a bit.”

On why he made comments about not expecting an apology from Ramirez despite the fact he let the team down when he retired:

“I did say that from an organizational perspective it was a letdown. I can’t comment on me personally because this team is the Rays, it’s not the Maddon’s. It’s not about me. For me, whenever I’m dealing with another human being I’m just going to relate to that person on a one-on-one basis. Quite frankly I’m a very nonjudgmental person, but organizationally I did admit it was a letdown because we did count on him being our number four hitter with Longo (Evan Longoria) and him back-to-back. That was kind of a tasty looking setup based on the spring in particular because Manny was looking that good. That’s what I meant by that. I meant he did not owe me any kind of apology but from an organizational perspective it was a letdown.

“Based on the numbers that he got, that would’ve been like four years worth of salary for us right there for one guy. As much as I would’ve liked to have him back because I really like Carl a lot and he has done so much for our organization, it’s one of those moments where you know it just cannot happen. You also knew that he was going to have to end up in a big market situation. I really thought it was going to be the Angels. I truly thought he was going to go to the Angels based on everything I had heard and I was surprised he ended up in Boston. I just want to tell you this, in spite of his slow start, he’s going to be just fine. Don’t worry about Carl. He’s going to figure it out up here, he’s a wonderful young man, and he works as hard as anybody and he’s going to play extremely well in a Red Sox uniform.”

Whether or not Crawford is feeling the pressure:

“Of course. Of course he is and that’s where I think, I really talk about evaluating situations properly. Once he gets his feet on the ground, catches his breath, and gets used to being here he’s going to be just fine.”