There is a new regime in Berea that is running the show for the Cleveland Browns and it’s pretty clear what they think the team needs to improve on.  After the Browns finished 31st in the NFL in total defense and 29th in the NFL against the pass, Mike Holmgren, Tom Heckert, and Eric Mangini made it pretty clear that the secondary was a big weakness and it needed to be addressed.  With the seventh overall pick in the draft, the Browns took the player that many people feel was the best cover corner in this year’s draft, Joe Haden, and he should immediately help improve a putrid secondary from last year. 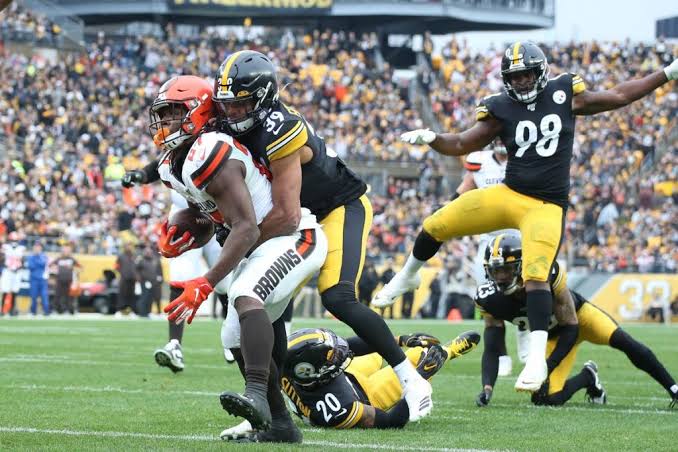 While Haden’s stock fell a bit during the process because of a slow forty time at the Scouting Combine, he bounced back nicely at his Pro Day and displayed all the skills needed to be a starting NFL cornerback.  In a division that had Chad Ochocinco and Hines Ward already and now features Anquan Boldin, the Browns needed to get a tough, physical corner to match-up and now it looks like they have that in Joe Haden. Joe Haden joined ESPN 850 WKNR in Cleveland with Michael Reghi to talk about whether or not he thought he would be a Brown, the ups and downs of the pre-draft process, his slow forty time, and what his expectations are for his rookie season.

On whether or not he felt like he would be a Cleveland Brown:

“I knew there was a real good shot when I came to my visit and as I worked out I talked to (Mike) Holmgren and he was talking about how he can’t promise me anything, but they’re very, very interested in picking me at number seven.  After he told me that, I kinda felt I had a good chance of coming.”

On the slow forty time that he posted at the combine and how that hurt his stock:

“I felt kinda down, but it was more media than it was scouts.  The scouts said that it must’ve been the back injury because the film doesn’t show you running a 4.5, the film shows you 4.4 or 4.3.  I was like yeah, that’s what I run.  After that I just had to make sure I made up for it at my pro day.  After that, I knew everything was going to be okay.”

On transitioning from a high school QB to a college corner while playing in the SEC:

“At first, I was raw.  I didn’t have too much technique and I didn’t understand the game on the defensive side.  I just was out there just trying to do what the coaches asked me to do.  I didn’t really have a concept down.  Then I finally started learning it my sophomore year when Coach (Vance) Bedford came along.  He taught me about splits, alignments, film study, receiver lean, and down and distances.  That’s when you really start getting into the stuff when you notice you’re becoming a real corner.  That’s when I started turning into a real corner, in my junior year.  That’s when I finally had it going.”

On his expectations for his rookie season:

“Right now I’m just going to come in here and try to learn and let Coach (Donnie) Henderson coach me up and just bring everything I got to the table.  I’m not gonna say that I’m gonna come in and start right away or be a nickel or anything like that.  I just want stuff to fall into place.  All I can control is how hard I go and how hard I work.”