Jimmie Johnson Talks About Stage Diving, This Weekend’s Race and Being #1

Jimmie Johnson is the current king of NASCAR. And while the sport has seen many greats over the years — Richard Petty, Dale Earnhardt, Jeff Gordon to name a few — what Johnson is currently doing (namely: dominating the sport) is especially impressive because of the parity in today’s racing world.Wait, did I say “parity”? Scratch that. Because Johnson just straight up wins. And he talked about it recently too — being number one, maintaining a lead on the track, his stage dive after winning a third championship and the race in Phoenix this weekend. 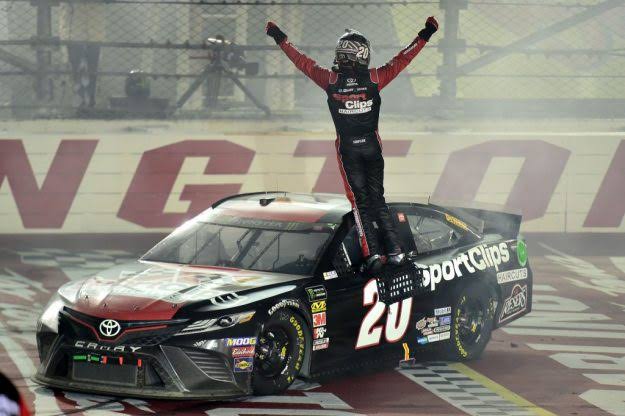 Was his stage-dive off the car after winning his third championship spontaneous or practiced beforehand:

“There’s a little time after you take the checkered flag as they get everything set up on the front stretch. And I’m like, “what can I do, I’m ready to get rowdy here and I’m not sure what to do” so I pulled up then NASCAR wanted me to pull onto the stage and I did some donuts. As I was doing that I could see my crew guys kind of gathering and I assumed they’d run out and we’d have a cool moment. As I was climbing out of the car they were running and I got on the hood of the car and as they got close I jumped, and as I jumped they weren’t really to me yet and I’m thinking, “man, I hope I jump high enough and get some hang time here and the crew will get in here and catch me”. And luckily they got there just in time and I didn’t land on my face.”

On staying cool and composed in public and staying one step ahead of the competition:

“I just really try to do all that I can. And with my crew guys, we’re a very close group and we all focus hard and do our jobs right. If we’re all doing our jobs right, it’ll all come together and we’ll have the success that we want. I’ve bought into that concept and we live it and we all have found ways to really maximize our particular job and it’s worked out for us. Hopefully it will last, there’s no telling how long it will last but last year it worked well.”

On the race in Phoenix this weekend:

“I think that track puts on a great show. Each end of the track is different here, tight radius in one and two then a sweeping corner in three and four. And the track’s old, the surface doesn’t have a lot of grip and we slip and slide. I think that’s the type of racing the fans like to see. Door to door, bumper to bumper, banging, cars sliding around. The last few times we’ve been there we’ve had the right strategy and the right car to go out and win and I feel like we’ll be in good shape again this time.”