Jim Tressel’s Buckeyes Are One Step Closer To National Championship

The Ohio State Buckeyes entered the college football season as the favorite of many to bring home the Bowl Championship Series national championship. With Heisman Trophy contender Terrelle Pryor at quarterback, the Buckeyes were the favorite to come out of the Big Ten, but they also had to get to conference play unscathed.
One big non-conference victory later and they should get to league play unbeaten. Ohio State got by Miami — and rather impressively, I might add — on Saturday, surviving their biggest nonconference test. In fact, with Penn State, Iowa and Michigan in successive weekends to end the season, the Buckeyes really only appear to have one stiff test in the next seven weeks. They’ve got Ohio this week, but most importantly in the next few weeks, they must play at Wisconsin on Buckeyes coach Jim Tressel joined The Dan Patrick Show to discuss how much he has learned about his team in two weeks, his thoughts on the Big Ten’s new divisions for, sweater vests, preparing college players for the NFL, using Reggie Bush as a cautionary tale and his feelings on non-conference scheduling. 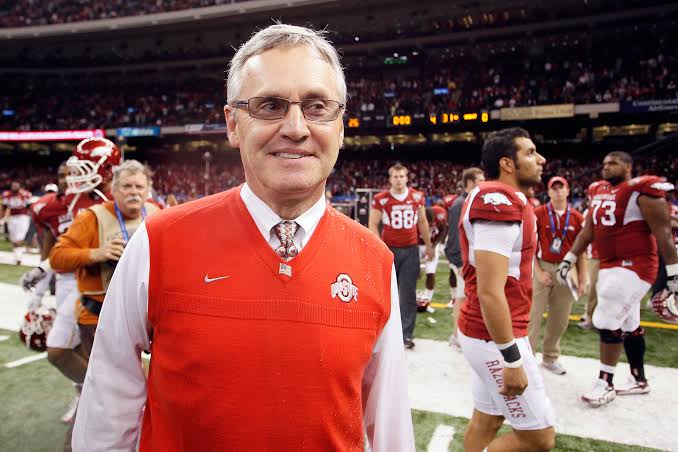 On how much he has learned about his team so far:

“I know that they’re really interested in playing hard. I think they enjoy being around one another. I think they want to be a good team. What we need to find out is if we can get a little better from a technique standpoint and a consistency standpoint. We’ve got to have our depth grow. I was concerned going into the year, not so much with the first group, but were we going to have the depth to go through a 12-game grind and there’s still some questions to be answered there for sure.”

On whether he’s glad Michigan will be in the opposite division of the Big Ten:

“Gosh, you know Dan, I haven’t given that a whole bunch of thought. I’ve got 25 seniors who don’t really care what the divisions are in the Big Ten. Maybe someday in January when we’re out recruiting and have a chance to talk about that, we’ll think that through a little bit. I’m just excited that we’re playing them in the final game of the year. I would hate to lose that tradition.”

On the last sweater vest that he received as a gift:

“It was two years ago from my nephew, who is the linebacker coach and special teams coordinator at Michigan State. He gave me a green Michigan State sweater vest for Christmas. I have it in my closet. I haven’t figured out when that moment will be when I get to wear it.”

On whether his job is to get players ready for the NFL:

“You know, my job, I think, is to help our guys get ready for later in life and not just from an athletic standpoint. In some guys’ cases, the NFL is part of, perhaps, some of their future. And so yeah, I would say the answer to that is yes. I know that’s one of [Terrelle Pryor’s] goals. We talk all the time about goals whether they’re inside or outside football. That’s certainly one of his goals.”

On whether he uses Reggie Bush as a cautionary tale:

“Not specifically. That one is so publicized that they’ll probably hear and read and so forth about that one many times. … [We have those conversations] long before the Reggie Bush thing. That’s ongoing. We have compliance education and agent education and casual conversation. It’s real, because when you get into those high-profile situations like ours and USC’s and so forth, you feel somewhat helpless outside of the counseling you can do.”

“I think what it means to your season is what’s most important. If you have one of those September matchups that you know you’re going to have to be at the top, top of your game, at least to the point you can be in September, I think that helps your preparation. It certainly helps your reality, because once that game’s over, whether you won or you lost, there are certain realities. And then, I think it gets you better prepared for your conference because you know a little bit more about yourselves. … In terms of the BCS, some could argue that it could knock you out of the BCS. I don’t know that that’s true. It could … but you always talk risk versus reward and we think there’s a lot more reward than there is risk.”