Jim Tracy on 2011 Colorado Rockies “We know how to be good. I’ve challenged this team to be great.”

The Colorado Rockies made headlines this off-season by opting to not add to their roster, but instead build around it with the seven-year extension they gave to franchise shortstop, Troy Tulowitzki. The mega-extension netted the Rocky Mountain star a cool $134 million to remain with the team through. Tulowitzki is now the indisputable face and centerpiece of the franchise. The Rockies now must hope the shortstop can stay healthy for the long haul. Tulowitzki did after all break his wrist last season, an injury that forced him to miss more than a month of playing time.Jim Tracy had the Rockies firing on all cylinders last September, putting a scare late last summer into both the eventual World Series Champion San Francisco Giants, as well as the San Diego Padres, for the NL West title. 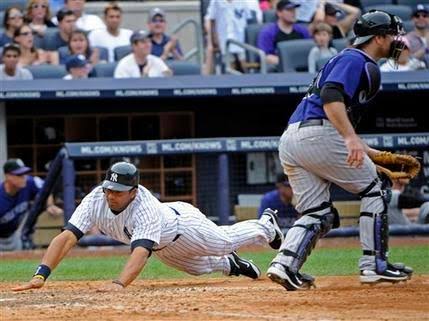 Colorado finished 83-79 last season, but they faded down the stretch due to poor play on the road.  Tracy also had some issues of his own this off-season, collapsing in the lobby of the hotel where the winter meetings were being held. Tracy claims he is just fine now and that there’s no cause for concern. The only thing that has changed is that he is the biggest fan of bananas because it helps keep his potassium level high.  He feels the Rockies have had a great spring training and are ready to take that next step towards becoming a great team this season.Jim Tracy joined 104.3 the Fan in Denver with The Drive to discuss how spring training went, how he feels right now health-wise, what is it going to take for his club to win the NL West, and what has he learned about this Rockies team this spring training.

How do you feel so far about things this spring?

“Quite frankly I feel like we’re in a very, very, good place up to this point. We’ve had not a good spring, we’ve had a tremendous spring. We have focused our attention on some of the little things that I felt like last year got away from us a little bit that could have possibly helped produce more runs, which would have been very, very, beneficial for us, but I think when you consider all things together any facet of our club right now is pretty much in a place where you would like it to be in at this late of a juncture this spring.”

How do you feel right now personally?

“Well actually I feel really, really, good. I can tell you guys that I’ve become a big fan of bananas even though I wasn’t one prior too, but in order to maintain a potassium level and things like that. It was strongly recommended to me by my doctor that if I didn’t like them [bananas] I learn how to. Subsequently, I really feel physically and strength wise actually better than I have over the course of the last couple of years to be quite honest with you.”

What do you look at when you look at the NL West? What are you guys going to have to do in order to win your first division title?

“Well you know something Mark [Schlereth], I think that actually what we need to do is what I was just taking about. Knowing that you know the big strength I see in the National League West is when you look at any other clubs in our division and said this last year and I think it holds truer this year than it did a year ago because some of the younger guys that I am referring to from a pitching standpoint they’re a year older, they’ve had an additional year of experience at pitching at the major league level…so one’s in my opinion in our division are at premium plus the fact that a couple of ballparks, three of them actually, off the top of my head in L.A./San Diego/San Francisco they’re not really known as hitters ballparks. With that being said when we have the opportunity we need to score runs. That situational at-bat where we make a productive out we run somebody across the plate in the process. I think that’s absolutely imperative and something

I don’t feel we did a good enough job of a year ago when you look at the fact that we played fifty-eight one run games last year and lost thirty times and still won eighty-three ball games. I just wonder if we win obviously another eight or nine of those you know we tie the record that we had set a year before for most wins in the history of the franchise and more than likely put ourselves back in the postseason last year. But when you start talking about [Mat] Latos and San Diego, [Clayton] Kershaw and [Matt] Billingsley in L.A., and [Ubaldo] Jimenez/[Jorge] De La Rosa/[Jhoulys] Chacin in Colorado, Ian Kennedy in Arizona, the [San Francisco] Giants bullpen, the [San Diego] Padres bullpen, when opportunity is there to put runs on the board instead of just waiting for the big inning constantly you have to be mindful of that and you have to do that because more times than not Matt Cain, Timmy Lincecum in San Francisco, starting pitchers, they don’t sign up to give you the big innings and more times than not they don’t do that. When you have opportunities to chip away at them you have to do that. I think you combine our situational hitting with the fact that always realizing that when the ball comes off the bat you’re not a base runner. Can we can get an extra ninety feet before the next guy comes to the plate. All of that stuff in my opinion will play into seeing if health wise, knock on wood, we stay much more healthy than we did a year ago. That in itself I think can help lead us to the fact of us being able to think we can win our first division in the history of the organization.”

What have you learned about your team this spring training? Every year it’s something different, but what is it this year?

“Well what I’ve learned is that the message I think we have sent since day one of spring training they’ve heard it loud and clear. I think when you go back and look at this club going back to You know since 2007 we’ve gone from being a club that’s been to the World Series, we’ve had two…we’ve had a National League Championship, a Wild Card Championship. We’ve had winning seasons three out of our last four years. Quite possibly with a couple of these situations we’ve been talking about you guys could have been back in the post-season last year. I think the message is this, I challenged them with this, we know how to be good. We certainly do. We were a successful ball club in the playoff race deep in September last year with 833 days to the disabled list. We did a pretty good job of juggling balls and staying competitive. We got step up performances when we lost the likes of Troy Tulowitzki, 4/5th’s of our rotation at one time or another, Huston Street for the first 11 weeks of the season, Rafael Betancourt really not being himself. We know how to be good. I’ve challenged this team to be great. The way you become great is you do a lot of the things we’ve been doing since late May of  but all these little things that the four of us are talking about. You need to take as much pride in that as you do hitting a three-run homer in the fifth inning knowing you’re telling the industry this is not only a very talented team, this is a very intelligent team, that knows how to win close games and is very, very, good at doing it.

That’s been the challenge here since day one because one thing that has really jumped out at me at you guys and I think our pitching staff has recognizes this and I think it’s very, very, important to have that happen is keep the ball, get after the hitters, attack the hitters, get the ball in play and keep it off the big part the sweet part of the barrel of the bat and we’ll make plays for you. If you can do that efficiently from a starting pitchers standpoint you minimize the number of pitches you’re going to throw. You stay in the game much longer. You make your bullpen much stronger because you’re not asking them to get ten or twelve outs every night. We ran into that problem early in the season last year. A lot of things come into play here, but as I just mentioned all of these things we’ve talked about since day one, this is what it takes to be a good team and make a great team because what took place this winter with the likes of Troy Tulowitzki and Carlos Gonzalez and down the road and Ubaldo Jimenez…what a foundation we have not only in place right now, but a foundation to build from for the next several years. You know the anticipation here is and should be that we have a chance to be a good club here for several years in a row and that’s exactly what we’ve strived to do. I think we’re successfully accomplishing it.”