The quarterback controversy is just beginning out in the Bay Area for first-year head coach Jim Harbaugh, but it’s hard to get a read on who he is exactly in favor of. Former number one overall pick in the draft, Alex Smith, signed a one-year deal to remain in San Francisco last week and the 49ers drafted Nevada quarterback Colin Kaepernick in the second round of this year’s draft to be the leader of the future. Smith has a chance to prove himself in his seventh year with the 49ers, but cannot practice until August 4th due to new collective bargaining rules while Kaepernick gets the bulk of the snaps in training camp right now. Jim Harbaugh is a former NFL quarterback who worked wonders at Stanford making the university a BCS contender as well as developing a potential number one overall selection in quarterback Andrew Luck, who elected to stay in school rather than enter the NFL draft. 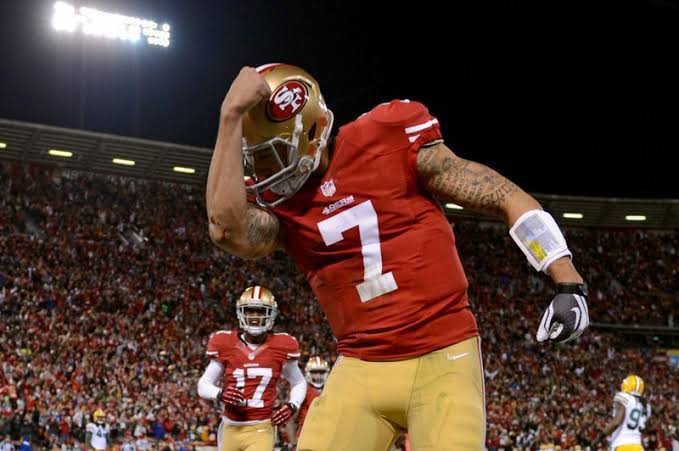 Harbaugh has the trust of 49ers fans to bring stability to the quarterback position for the first time since the days of Steve Young and Joe Montana, but it’s hard to believe he will get the benefit of the doubt with the fan base if doesn’t start Colin Kaepernick the minute Alex Smith begins to struggle again. In the following interview with KNBR Harbaugh surprisingly defends Alex Smith.Jim Harbaugh joined KNBR in San Francisco with Murph & Mac to discuss Colin Kaepernick excelling at 49ers training camp during the absence of Alex Smith, Colin Kaepernick handling the pressure of possibly starting as a rookie quarterback, the 49ers offense running out of the shotgun more because Colin Kaepernick is familiar with that formation, Alex Smith being unfairly criticized by the media, the injury status of Michael Crabtree and the San Francisco 49ers actively pursing a wide receiver in free agency.

How damaging has it been to not have Alex Smith be here? Has it been a good thing for Colin Kaepernick?

“Well you hit it. The good news and the bad news. Which do you like better? The bad news is that Alex has missed three days of practice. Today will be the fourth, but he’s in meetings. He’s watching tape. He is in the installs and etc. Now the good news to that is that Colin and Jeremiah Masoli and Mac [McLeod Bethel-Thompson] have been getting those reps with Colin getting the most of them. The early report is that Colin is going to be just fine. He is a good guy. Smart guy. He’s got a hose.”

Can your rookie quarterback Colin Kaepernick handle the pressure?

“That’s the thing you got to find out. That’s the position with probably the most pressure around it because they handle the ball every single play and it does not seem too big for him. That’s one of the reasons I say I think he is going to be just fine.”

Are you going to run the shotgun more because Colin Kaepernick played well from that formation in college?

“We want to turn that into a strength and be able to do both very effectively. We are working more from under center with Colin. We know what he can do from the shotgun and we’re mixing that in, but let’s turn a weaknesses into a strength.”

Do you think that Alex Smith has been unfairly criticized by the media?

“When I talk about some of the blog kind of things they get pretty vicious at times. Alex has got thick skin. He’s got skin like an armadillo this guy, but family members that have got to read that. What I was trying to say was most players would be offended by that and choose when free agency rolls around to become a free agent to say ‘to heck with the team I was on. I am going out for greener pastures.’ I can…we will never know for sure, but I can tell you with a pretty high degree had Alex Smith tested the free agency market he would have been a very sought after free agent not to compare any other names, but you saw some of the other guys that were out there in the free agent market and being wooed by various teams and Alex chose to stay here. I think that’s a big deal to me because of all the things that had transpired before. I feel like more than once he was thrown under the bus by his own side. To have him come back I think that shows a lot of character. A guy wants to prove himself in his team that drafted him originally, wants to use our team as the fresh start and turn the next page. I think in this day and age of professional sports and just this day and age in general that’s rare. That’s a character trait that is probably more between rare and extinct is the way I think I said it.”

Are you actively seeking a wide receiver? How seriously hurt is Michael Crabtree? How soon can Crabtree be back in the mix?

“Well Michael is available to comeback. We don’t know exactly how long it will be. It could be a very short time that he’ll be back and we fully expect him to be back playing this year. To your other question are we going to be active? Of course. Are we attacking it? We really are at every position looking in any way to make our football team better.”