If Jerry West has his way, the Golden State Warriors will be a smart, but risk-taking team. The NBA Hall of Famer joined the Warriors this week as a member of their executive board, but insists he’s not just going to be some name on a list of board members.Rather, West will basically act as an advisor to the Warriors owners, general manager Larry Riley and GM-in-waiting Bob Myers. West makes it sound like he’ll be all for taking educated risks, saying that his view is that the best risk-taking teams in the league are the best teams. 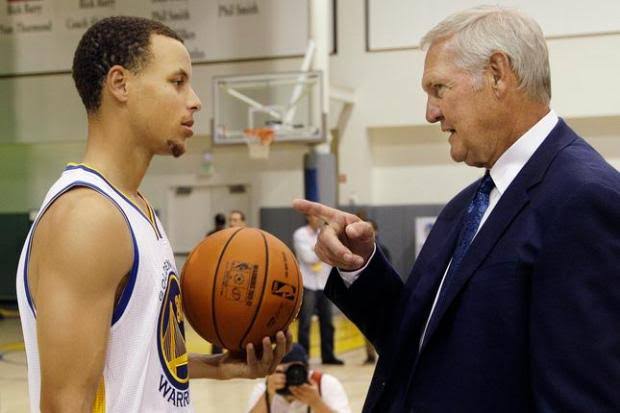 The group already has a decision on its hands as Golden State needs a new coach after letting Keith Smart go. West believes the team needs to look at up-and-coming young coaches, following the path of the Miami Heat and New Orleans Hornets. There’s no doubt he’s got plenty of opinions and he’ll certainly make them known loud and clear to the Warriors.Jerry West joined KNBR in San Francisco with Razor and Mr. T to discuss his new responsibilities with the Warriors, his personality in that position, who will ultimately make the decisions, if he has given his input on the coaching search, what else the Warriors need to do to be a better team and what it’s like to be the player on the NBA logo.

What will his responsibilities be as a member of the Warriors’ executive board?:

His personality when it comes to being an adviser:

“I’m hopeful I can maybe provide a little bit different insight. I’ve seen a lot in my life and it all hasn’t been fun. I’m a big believer in risk-taking in professional sports. I think the best risk-takers do the best. I would encourage them to look at the team objectively and be aggressive as heck.”

When it comes to big decisions, how will they be made given the number of executives involved now?:

“I’m not going to be the ultimate decision-maker. That’s something I didn’t want to do. I said, ‘I have to know honestly, if you feel like I’m going to come here and step on your toes, I’m not coming.’ There’s no basketball experts. Sometimes people have the better educated guess. And, based on my experience, if they ask me a question, I’m going to give them my opinion.”

Has he given his input on who should be the new coach?:

“They’ll ask me about [candidates]. One of the things we are seeing are some young, successful coaches. I think a lot of coaches who have been around a while may not be the perfect fit for this team. I look at Erik Spoelstra down in Miami and I look at Monty Williams down in New Orleans. I thought both of those guys did an unbelievable job and Spoelstra in particular because there was the ultimate pressure on him. There’s going to be new coaches coming on the scene that I think are really important to consider.”

What do the Warriors need to do personnel-wise to get better?:

“I think there’s room for improvement if they get big people. They need to get bigger. I don’t think scoring’s a problem. I think rebounding and stopping the other team is a problem. Those are the things that always excited me about working in the league. How can we get in position to get a guy that might really help us?”

On being the player depicted in the NBA logo:

“Obviously it’s tremendously flattering. There were three other players that they were considering at the time. It didn’t have so much to do with the player, but the way the silhouette was designed. It really was when the league started marketing the league and the players themselves and the league needed some kind of a brand. For me, at that point in time, I didn’t know who it was.”