After 26 successful years, including 23 at the helm of the Utah Jazz, Hall of Fame head coach Jerry Sloan has resigned. There have been all sorts of reports from the national media that Sloan’s exit was the result of a tumultuous relationship with star point guard, Deron Williams. In fact, reports this week claimed the two almost exchanged punches during a heated half time exchange. However, after listening to Sloan and Williams speak about the incident and their relationship with one another, it doesn’t quite sound like Sloan was either forced out of town because he couldn’t get along with the team’s most important player, or that he decided to walk away because he grew tired of Williams. I’m going to miss seeing Sloan on the sidelines come playoff time. I always wanted Michael Jordan’s teams to beat the Jazz, but in recent years, I’ve been quietly hoping the testy head coach would finally win that elusive championship. Oh well, it wasn’t meant to be, and it sounds like Sloan might have thought the same thing when making his decision. Sloan and Williams each joined KFAN in Salt Lake City on Thursday to talk about Sloan’s decision to resign, their relationship with one another, Sloan’s Hall of Fame run with the Jazz, how their relationship was undeniably rocky at times but only because they’re both so competitive, and what’s next for both the team and themselves individually. 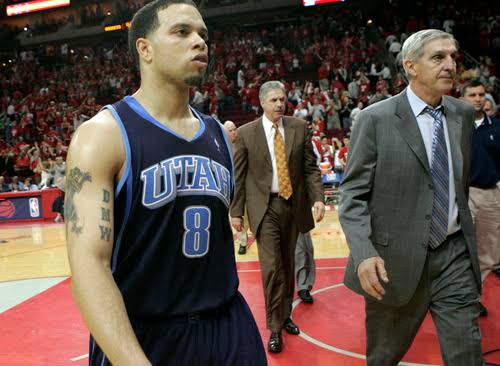 On what he thinks led to the decision:

“It’s time for me to move on. This is a great organization. They’ve been great to me and they deserve better.

On what the process was for him coming to this decision:

“It’s just something like I’ve said many, many times and like I said earlier, it’s boring but you wake up one day and it’s time to move on. So why drag it on.”

Whether there’s a single moment when he realized it was time to move on:

“Yeah I’ve had it before but I’ve fought through it a few times. I don’t know how else to explain it. It’s not dramatic, it’s not a big deal. It is in some ways I guess but I don’t look at it in that way. It was just time for me to move on.”

Whether he realizes this is stunning to others:

“No, I’m not aware of it. I guess I am a little bit because of the number of people here. But I’m always intimidated by people.”

Everyone is looking for that reason (why you stepped down):

“That’s what happens with anything, just like a marriage, they’re looking to what broke your heart or whatever. But basketball goes on.”

On if his relationship with Deron Williams had anything to do with it:

What was your most enjoyable part of the job:

“The most important thing for me was watching guys compete. Karl Malone talked about playing hard but he always talked about competing. There’s a difference. A lot of people play hard or think they’re playing hard, but competing, if you’re competing you’re trying to beat somebody. Playing hard, you can win or lose that way. But competing, you’re putting everything you’ve got into it. So that’s a fun part for me, watching guys. And when things get a little different, how do they drop out of it at times. So give the other team credit.”

Williams on if he was shocked by the decision:

“I was shocked. I didn’t think that he would ever retire in the middle of a season, but I watched the press conference and he said it was his time.”

On how it’s become all about Sloan vs. Williams in terms of the national story lines about the Jazz:

“I mean everybody, all those guys — Ric Bucher, Chris Broussard — they’re in our locker room every day and they know what’s going on, so I guess they are the experts. I’ll let them report what they want to report, that’s what they’re paid to do. That’s why I’m always so short and rude with the media. Ric comes into the locker room and says goodbye to me every time and acts like he’s my friend, but you know what, the day that they find something that they want to spin, they jump on it. So that’s why I am the way I am, and will continue to be the way I am. But me and Coach Sloan, we’ve had, I wouldn’t say we’ve had a rocky relationship, but we’ve had our disagreements over the years. But you know what, no more than any other coach and player have arguments. We’re both very competitive, and we’re both very stubborn, and I think that’s where we clashed. But the one thing is we both wanted to win and were interested in doing that.”

Whether there’s truth to the report that he went to the front office and said he wouldn’t re-sign if Sloan were the head coach:

“That’s not true, not true. I would never push Coach Sloan out of town. He’s meant more to this town and to this organization than I have. By far. It’s one of those things where I would have said I wanted  out before it would come to that.”

Whether it’s true that he and Sloan almost came to blows with one another during halftime the other night:

“We just had a disagreement. We’ve had worse ones before, I’ve seen him have worse ones with other players. It’s just, Jerry is very fiery, I guess that’s the word to use, and I am too. So I guess we clashed on some things.”

On what he’ll remember about his time with Coach Sloan:

“I feel like I’ve been lucky. Not too many people get to come in the league and play for a Hall of Fame coach for their first six years. I got a chance to learn from one of the best, and I won a lot of basketball games because of Coach Sloan.”

On if he has any initial thoughts about new head coach Ty Corbin:

“I’m excited. All the guys like Ty.  I felt like he should have had a head job by now anyway, so I think he’ll do a great job. Guys respect him a lot. I meant with him today so it should be good.”