Jerry Jones: Our Video Board Will Evolve

Everyone was giving the Cowboys the business for having a punt hit their newly installed video board in a preseason game.  Naturally, everyone thought a solution would be to raise the screen, but Jerry Jones didn’t want to move it for a few reasons.  First, it meets NFL regulations, second, it would change the fan’s sight lines, and third, it would cost a heap of money.  So, it stays at the status quo for now.  Since the Titans’ kick ricocheted off the expensive technology, there has been one ricochet-less game played at Texas Stadium.  Jerry Jones 1, Critics 0.  Jones joined KRLD in Dallas to discuss the future of the video board, what fans can expect out of the Cowboys in their final preseason game, and if the league should change the injured reserve rule. 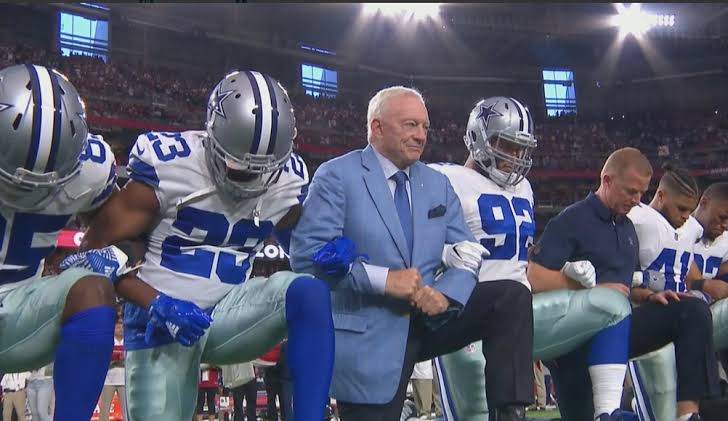 On the new overhead video board everyone’s talking about:

“Our attitude about it is it’s so different than the traditional, even the big jumbotrons that are on the end of the field.  So, we’re gonna go real slow as to what we do; we know that everything’s in real time – there’s no delay from anything that happens on the field to the big screen and that’s as it should be.  We have eight separate cameras that feed that screen, that’s not a network feed, but they’re live Sony digital cameras.  The bottom line is, we’ll have the things that we know are important and of course that’s the live action on the field, number one, but then the live action when the play’s not going, the fans, those kinds of things.  We’ll see as we learn and evolve on how to maximize the entertainment aspect of it.”

Does the injured reserve list rule need to be looked at again?

“No, because what they did is give you eight more players.  Like, we have 45 that week that we can take to the game so to speak, and we have 53 players on the active overall roster.  Those eight extra players are for what you just mentioned: they’re supposed to be there for the injury situation and give you the allowable there, and, everybody’s got the same number.  What you used to have is you’d have some teams, believe it or not, that have 20 or 30 players, and those guys would be out there on that four-week deal, five-week deal, and they’d be back there to just go back and get.  Some had a lot of numbers, some didn’t have, the league evened that up real good and everybody gets eight.”

On what fans can look for in the Cowboys’ final preseason game Friday:

“Well, look for us to really again put an emphasis on the ball control, the running the ball there early.  You shouldn’t see and we shouldn’t see much of our starters because it’s just not enough time to heal up a nick.  But the bottom line is, I like what we’re doing physically, and so you’ll see that on offense.  On defense, you’ll really see a real large number of our secondary, down the line guys, you’d like to see them cover well.”