Jermichael Finley: “All that talk with the Eagles and the Saints, that will come to a halt I guarantee you.””

Despite being the defending Super Bowl champions and returning most of their key players on both sides of the ball, there hasn’t been too much hype or attention on the Green Bay Packers this offseason. That’s just fine with head coach Mike McCarthy I’m sure. Some of his players, Jermichael Finley included, feel like it’s only a matter of time until the hype shifts from the Philadelphia Eagles to the Packers. In fact, Finley, the fourth year tight end out of Texas, ‘guarantees’ that all the talk about the Eagles will come to an end before they hoist a Lombardi. Maybe, maybe not. The Packers are certainly stacked. But perhaps Finley should be more preoccupied with staying on the field for an entire season. 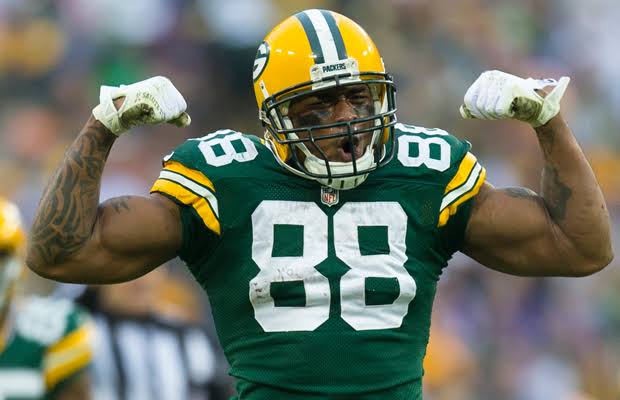 He’s missed multiple games in each of his first three professional seasons and was lost for the year in ’10 after just five weeks.Finley joined WSSP in Milwaukee to talk about how his knee is feeling, why he’s not concerned about there being enough balls to go around on Green Bay’s high-octane offense, what he can share about how he’ll be deployed in, specifically if there will be plays where he’s lined up on the left side by himself with trips/bunch WRs on the right side, Coach Mike McCarthy’s displeasure with the Packers work in recent training camp practices, him looking noticeably slimmer this camp, if he intends to add weight his next month or if he’s pleased with his playing weight after a grueling offseason training regiment, the Packers not receiving much national attention this offseason despite being the defending champs, and what he thinks about the Eagles as a ‘dream team’.

How his knee is feeling at this point in training camp:

Are there enough balls to go around on this explosive offense:

“As long as we get the W. The ball thing, that’s a non-factor also. We’re going to get our balls, and I think the receiving corps is going to be happy at the end.”

If there are plans to have more packages in 2011 where there are three WRs to the right with him lined up by himself on the left, a formation that has proven to give defenses nightmares in the past:

“Oh man, I think we’ve got more of that in the package than anything. We’ve got three-wide and I’m over there spread out by myself. And I love it over there tell you the truth over there by myself because I’ve got one guy over there on the island — beat him and it’s a rout.”

On Coach McCarthy’s displeasure with the Packers’ Monday practice sessions:

“We’re a week in to training camp man, and a head coach is supposed to be like that. He’s supposed to get us riled up and ready, but at the same time we’re still trying to get in the swing of things. And it all happened, we’re not trying to play for a Super Bowl tomorrow, the next day or a week from now. We’re just starting to get in the swing of things.”

On looking slimmer, almost like a WR, and if he intentionally tried to lose a few pounds in order to get quicker or some other reason:

“I was really just doing more conditioning, trying to get the knee….I was pushing the knee, trying to get right for training camp. So at the same time, if you ever heard of G-Train, G-Train is to get my knee right. But I was on that consistently. And I stepped on the scale one day and I was 240, and I was like ‘I got to go to training camp next week’. But at the same time I was moving like I wanted.”

Does he feel like he needs to add more weight this next month before the season starts?

Why he thinks the defending champs aren’t getting much national attention:

“I ain’t worrying about all that. Like I said, all that talk with the Eagles and the Saints if you want, that will come to a halt I guarantee you.”

On Vince Yonng’s comments of the Eagles being a ‘dream team’:

“Ah man, that’s just talk. That’s on paper. VY is a backup, I don’t think he should be doing too much talking. But at the same time, that’s just on paper.”