Jeff Gordon Needs A Checkered Flag to Win the Chase

The Chase for the NASCAR Sprint Cup Championship is NASCAR’s answer to the excitement of the playoffs found in other sports.  For the last ten races of the season, the qualified drivers have their points set in the position they qualify and the points are still assigned the same way as the rest of the season.  Jimmie Johnson has won the Sprint Cup four-consecutive years in a row and will be going for his fifth come Sunday in New Hampshire.  One driver that will be challenging Johnson is his teammate, Jeff Gordon.Like Johnson, Gordon has won NASCAR’s championship four times.  To capture his fifth Cup Series championship, Jeff Gordon believes he’ll first have to do something he hasn’t done in a long time: win a race.  Gordon, who enters the Chase as the eighth seed and is currently sixty points behind leader Denny Hamlin, has not won since April of last year at Texas Motor Speedway. 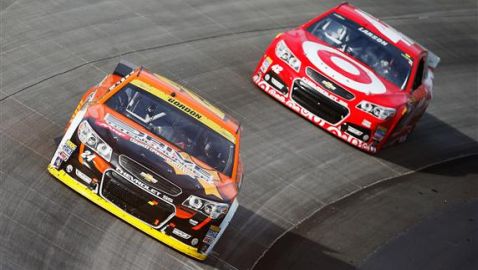 His winless drought that spans over a year and a half spans and more than fifty-five races needs to be snapped during the most pivotal time of year.  If he wants a shot at the Sprint Cup championship, Gordon must at least win one of the remaining ten races because his prospect of winning this Chase without winning a race isn’t realistic.Jeff Gordon joined ESPN Radio in Dallas to talk about whether the Chase is going to make a difference in his outlook on how he races, how much the recent success of Jimmie Johnson upsets him but at the same time doesn’t because he is part co-owner of his car, and whether a driver can win a championship without winning a race by staying consistent in the Chase NASCAR implemented.

Whether the Chase is going to make a difference in his outlook on how he races:

“Well we try so hard every weekend to try to win races, consistently do that week in and week out so it is hard to ask any more out of ourselves but it just seems like in other major sports that when it is playoffs time you just hope all the hard work that you put into it, the chemistry among the team, for us in racing, all of the little parts and pieces that we put into that race car we do it better than anybody else.  It truly is a team sport.  You just hope that teamwork and communication and the chemistry plays out better than it has all year long.  It is hard to put any more effort out but you can certainly take our chances out there for sure.”

How much the recent success of Jimmie Johnson upsets him but at the same time doesn’t because he is part co-owner of his car:

“Yeah I will be honest it is better for me when I win.  It has been very exciting to watch that team be built into what it is and I am proud to be associated with it and that it is at Hendrick Motorsports, but at the end of the day it is all about the DuPont #24 Chevrolet and getting into victory lane and winning championships.  But those guys have set the benchmark.  They’ve really stepped it up.  When Chase time comes they really know how to make it happen so we’ll be looking for them, but there is a bunch of teams out there that are going to be tough.  Who knows who is going to win this thing this year.  We just hope that we are a threat for when we get to Texas.  Texas has been really good for us the last couple of years.”

Whether a driver can win a championship without winning a race by staying consistent in the Chase NASCAR implemented:

Whether the drives tempers are going to rev up:

“Oh yeah things are going to ramp up in a big way.  You don’t want to have any enemies out there.  To win the championship you don’t have any rivalries that are going to prevent you from getting your best finish but at this level and with everything that is on the line with the championship that is kind of out the window and guys are going to be pushing harder and when you push harder you make mistakes and you take more risk and you are going to rubbing fenders and rubbing guys the wrong way are going to get upset about it, not only guys in the Chase but guys outside the Chase.  The only difference that I see with the ‘have-at-it boys’ a message sent to all of us, I don’t think any of us are racing any different it is just that we are not getting fined for it on Tuesday.”