A positive test for a performance enhancing substance can be difficult to come back from. Two in a row, you’re basically black-balled from whatever sport you were participating in. James Toney finds himself in that very situation. In what was billed as one of the biggest heavyweight fights since Lennox Lewis fought Vitali Klitschko, cruiserweight David Haye was all set to take on Wladimir Klitschko next Saturday. Haye had to pull out of the match due to a back injury suffered during training. Wladimir, wanting to replace Haye but still wanting to keep the June 20th fight date turned to Ruslan Chagaev to fill in for the injured Haye. Chagaev was supposed to fight Nikolai Valuev this past Friday in Finland, but Finnish doctors wouldn’t allow the fight to take place due to Chagaev’s high levels of the hepatitis B virus. For whatever reason, German doctors are ok with Chagaev’s hepatitis level, and have given their ok for the fight to take place. If you’re James Toney, or any other of the fading-into-irrelevant heavyweights, it has to come across as a major slap in the face that a guy would rather possibly catch the hepatitis B virus as opposed to fighting you. James Toney, who’s never at a loss for words, joined Pound for Pound Radio to discuss his recent slight, the heavyweight division overall, and his general disdain for the Klitschko brothers. 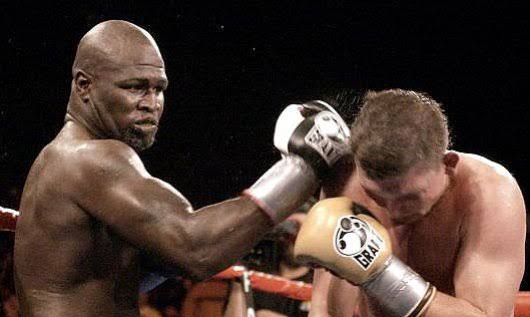 On the state of the heavyweight division and what was going on with the upcoming Wladimir Klitschko fight:

“It’s called being scared of James Toney. That’s what it is. If you look at the ratings, and look at everything above, the only person left to fight is James Toney. Everybody else is either taken another fight or on vacation or whatever. I’m willing to go to Germany and woop his ass in front of 50,000 people. But they don’t want to see me. They would rather fight someone who has hepatitis B, or C or whatever it is and get infected by everybody over there. It don’t make no sense. Its stupid.”

On if HBO had approached him regarding filling in for Haye:

“No. Basically they haven’t. We put it out there that we would take the fight, and HBO told my promoter Larry Goosen that they would get back with him and we haven’t heard nothing back from them. If they’ve got issues with me, nothing I can do about it but I’m ready to fight. If everybody want to see a real fight, if everybody is tired of seeing the championship be over in Germany wherever, it ain’t even Germany it’s Russia or wherever. To me it’s ‘take off your panties and lets go to work’. The whole boxing community thinks that the Klitschko’s own the world. They think they’re the saviors. They’re not the saviors, they hurt boxing. Its garbage since they came in. They both suck.”

On if he thought Haye stood a chance against Wladimir Klitschko:

“No, he’s garbage too. He’s just another guy who has a big mouth, its not as big as mine, but I back mine up and he can’t. His chin is made of porcelain.”

Toney was asked about a possible rematch with Roy Jones Jr.:

“It would just be another fight to me. He would just get knocked out this time because I’m at my right weight. I don’t see nobody in the game of boxing who’s got the skills I do. I beat John Ruiz about a week before coming on your show, next, I’ll beat him with one arm. I wasn’t even supposed to fight. The reason I fought John was because those pussy ass Klitschko brothers didn’t want to fight on that date. (After the Ruiz fight) unfortunately I was still on the medicine from the surgery and I came up positive for steroids, which is bullsh*t.”

On how he tested positive for steroids a second time:

“That’s what’s killing me. This is what I said, right in front of the inspectors, ‘everything good, right?’, and he said ‘yeah, everything is fine’. The next thing you know my second one came up positive. I don’t take sports performance drugs. I don’t need to, and if I did my body sure don’t look like it. If you’re taking sports performance drugs you’re supposed to look cut up like (Evander) Holyfield and all that. Tommy Morrison. That wasn’t the case for me.”

Toney was asked why it’s so difficult to make matches in the heavyweight division: