Guest Column: Brian Murphy of KNBR in San Francisco on Broadcasting His Morning Show the Day After the Giants Won the World Series

On Tuesdays, SportsRadioInterviews.com will have a guest column penned from one of the many sports radio hosts whose interviews you see here often on SRI. This week’s column is courtesy of Brian Murphy from KNBR in San Francisco. Brian co-hosts “Murph and Mac” weekdays from 5a – 9a.  Brian is also the golf columnist for Yahoo! Sports.  Here’s his twitter feed.with fading health, non-existent vocal cords and a heart bursting with bliss, I did a radio show from Dallas broadcast back to the San Francisco Bay Area on KNBR.The San Francisco Giants, my lifelong baseball team, had just improbably won the World Series. I was there to see it, feel it, swim in it, be staggered by it. Now, the next morning, even before sunrise back home, my job was to talk about it, unabashedly. 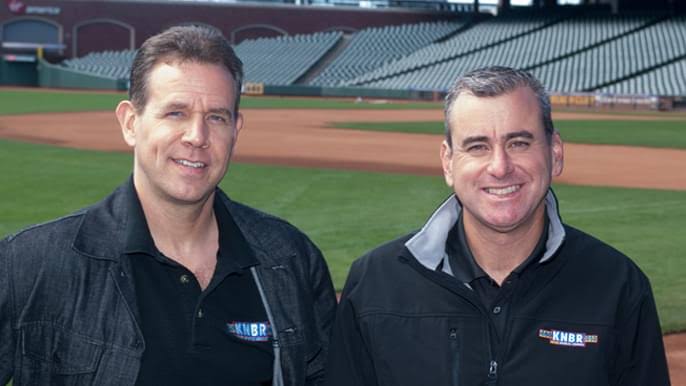 Funny how life turns out sometimes.

See, six years ago, I put down my pen and took a leap of faith.After 15 years as a sportswriter – the only vocation I ever aspired to – I changed tack. KNBR’s head honchos, Tony Salvadore and Bob Agnew, were stuck. They fired their Morning Show, and when their obvious candidates to succeed it fell through, they had essentially no options. As a result, they offered me the Morning Show gig on “The Sports Leader.”I wouldn’t say it was a desperate move, per se, but in football terms, it made a Hail Mary pass look like a screen pass in the flat.

My experience was not exactly Murrow-esque:

I’d never seen the inside of a radio studio until 6 months earlier. Even at that, I’d only been a fill-in co-host on afternoon drive a handful of times with the prolific Ralph Barbieri, a KNBR legend who’d essentially built the station with his intense takes and unmistakable pipes. My few times filling in for the absent Tom Tolbert, my radio chops were honed thusly: Nodding in agreement with Ralph, letting Ralph run roughshod, staying out of Ralph’s way.I was happy to continue writing at the San Francisco Chronicle, endeavoring one day to become a columnist, or get the dream call from Sports Illustrated. In the meantime, I’d follow Tiger Woods to Augusta and Scotland, type a few words, and have a ball. But then came the call from Salvadore and Agnew in the fall of ’04, and then the offer that was too good to refuse, and then the talk with my wife, and then the thought that my father once told me, “Behold the turtle: he only makes progress when he sticks his neck out.”

I agreed to the job.

If it worked out? Great. I could stop traveling with the newspaper, stay at home to help raise our family, meet a new challenge, provide for my family better, and still write on the side. If it didn’t work out? Fine. I’d find my way back to the writing world and chalk it up to the old Bull Durham line: “Sometimes you win, sometimes you lose, sometimes it rains.” So far, so good. I joined forces with an unstoppable force of energy and comedy named Paul (Paulie Mac) McCaffrey in February of ’06, and the ‘Murph and Mac’ show forged its mission statement: Ease into your morning with the understanding that laughing is good, sports are fun and if anybody takes himself too seriously, he is to be severely beaten about the face and neck.There was another key aspect to the whole thing: I could be a fan again.

This would loom large in the fall of 2010, when the Giants etched themselves into San Francisco history.I often think back to my first on-air partner, Tim Liotta. Tim sized me up the first few months, chuckled, shook his head and said: “Murph. Stop. You’re not a journalist anymore.”

I wasn’t sure what he meant at the time:

Was it the fact that I took notes during our on-air interviews? Was it my constant truth-seeking? Was it the fact that I showered and shaved before work, thus shattering radio tradition?Either way, it took me some time to appreciate, but his words proved true. Morning radio meant it was time to do less beat writing and more entertaining of the masses. If that meant dropping the “writer” persona, so be it. Paulie Mac, who quickly tired of my “writer” chatter, drove the point home. He inserted on our show a sound byte from “Full Metal Jacket” in which the drill instructor unloads on Matthew Modine’s Private Joker:

When things got a little too “writer-ly”, shall we say, Paulie would hit the sound byte, and I’d be back in my place.
As the years passed, the shoe began to fit. It was OK to still ask tough questions when interviews called for it, but it was more OK to remember that part of being a Morning Radio sports-talk host – at least in our view – was to have fun, and cut loose and remember that life is short, nasty and brutish, so there’s no need in making it more so.Would becoming a “fan” again cost credibility? I left it up to the listener. In my view, there’s a big difference between being a “fan” and a “homer”. A “homer” apologizes for the local squad, leans on excuses and avoids criticism. A “fan”? A fan tells the truth, hums with intensity and describes what he sees.That means shouting in pain when the hurt comes, and shouting in joy when the sweetness comes.Which brings me back to that November morning in Dallas, the day after my all-time favorite sports team did something I never dreamed it would do in my lifetime.

I took the sports-fan equivalent of the “Nestea Plunge”, spreading my arms wide, letting a beatific smile cross my face, and allowing gravity, sweet gravity, to pull me into the refreshing pool of sports-fan joy.I attended every game in the stands. I heckled opponents as I did in my Candlestick youth. I hugged strangers. I high-fived old ladies and children. I took the “No Cheering in the Press Box” adage and set fire to it, like the bleacher creatures lit various cigarettes of their choice.After all, I wasn’t in the press box. I was in the stands. And I was a radio guy, not a journalist, as Tim Liotta so aptly told me those years ago.From late August to early November, Paulie Mac and I took that emotional tsunami and made it our radio show. After all, our pact was to be honest with the listeners, and honesty meant letting it all hang out.

Mind, I remembered our task:

to entertain and to inform. When Bruce Bochy guested on our show throughout the playoffs, we asked the tough questions about Barry Zito’s role, and Pablo Sandoval’s slump, and Jonathan Sanchez’s mental toughness.