As the NBA Trade deadline was approaching, Gerald Wallace’s name was rumored in a number of potential deals. Despite Charlotte being very close to the playoff picture in the Eastern Conference, the Bobcats decided that is was time to part ways with one of their best players. Wallace is 28-years-old, he’s extremely athletic, and one of the better defenders in the NBA, but he also carries a hefty price tag which is why the Bobcats probably decided to part with the former All-Star. The Trail Blazers have been dealing with a number of injuries this season, including Brandon Roy, but they are still right in the thick of things in the playoff picture out West. The Blazers realized that if they are going to be serious contenders with the top teams in the West that they needed to make and move. While Gerald Wallace doesn’t make Portland the favorite out West and they are still just the sixth seed, but Wallace does give the Blazers more of a scoring punch on the perimeter and will take attention away from LaMarcus Aldridge as Brandon Roy tries to figure out how to stay healthy and adjust his game on a gimpy knee. Gerald Wallace joined The Fan 1080 in Portland to talk about getting adjusted to Portland after getting traded, whether or not he is getting more comfortable as he learns the system, if the Blazers are watching other teams around the Western Conference, and what are the realistic expectations in Portland. 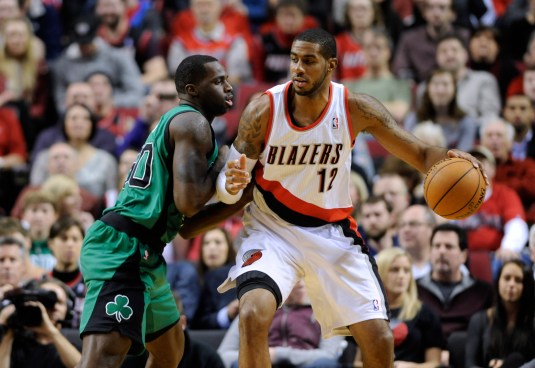 How he is adjusting after getting traded:

“It’s been an adjustment here trying to get used to it. It’s hard to leave your family in the middle of the season and move way across country, but other than that I think I’m doing pretty good.”

Whether or not he is getting more comfortable in the offense as more time goes on:

Whether or not it is too early to start scoreboard watching other teams in the Western Conference:

What the expectations are in Portland the rest of the season:

“For me right now to just keep winning. I think we have a legitimate chance of being a high seed and I actually think we have a pretty good shot at making one of the top four seeds in the Western Conference. Just gotta keep playing and keep doing what we’re doing successfully. Try to get back on the right track and move forward from there. We have some pretty tough games coming up. We have a nice four game road trip with Orlando, Miami, Charlotte, and Atlanta. That’s a big road test for us right there. Our main focus is to keep pushing and doing what we can do to be successful.”

Whether or not he will have extra motivation playing against Charlotte:

“I think so especially when it’s not even two weeks old yet. My main thing would be focusing on doing what I’ve got to do to help the Trail Blazers win.”