Georges St. Pierre Says He’s Not Quitting MMA to Wrestle in the Olympics

Can anyone beat Georges St. Pierre? Once again GSP proved that he is one of the best pound-for-pound fighters on the planet, if not the very best, after his destruction of Josh Koscheck. Koscheck went into GSP’s home country and showed that he’s just not in the same class as St. Pierre. In fact, very few fighters right now are. He has beaten everybody in the welterweight division and there is nobody left that even belongs inside the same cage with him at that weight class. I’m not sure what’s next for GSP, but if Anderson Silva can win his fight in February, he seems to be the only fighter that can challenge St. Pierre as the best pound-for-pound fighter in the sport. Georges St. Pierre joined the Fan 590 in Toronto with Andrew Krystal to talk about his dominant win over Josh Koscheck, whether or not he thought the refs should have stopped the fight because of the injury to Koscheck’s eye, clears up any rumors about him quitting MMA to wrestle full-time, and talks about what is next for him. 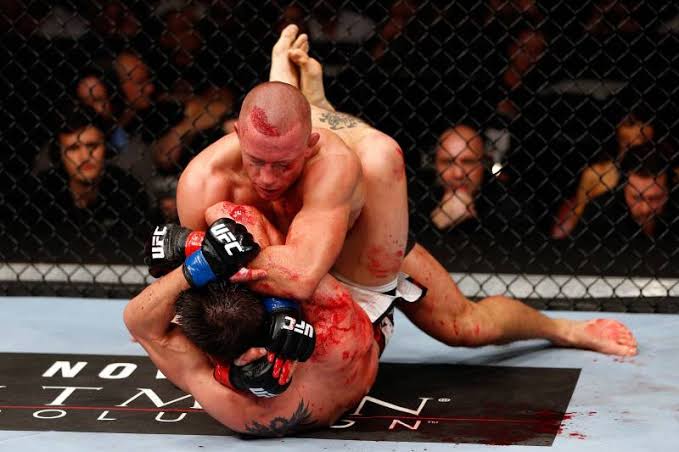 On the added boxing that he used in this fight:

On him resorting to a stand-up game because his takedowns were not effective:

“Yeah, but most of my takedowns, it was to make him worried about the takedowns. My main focus was to beat him with my punches and kicks, standing up, and keeping the fight on the outside.”

On the eye injury that Koscheck suffered:

“I heard he broke the orbital bone and had surgery. I hope he’s okay. (Host: Do you think the fight should have been stopped?) Yeah I think so. I think the doctors or his corner men should have stopped it because it’s very dangerous in this sport, he could lose an eye and also it could be a career-killing situation, but at the end of the day it was good for the fans.”

On the rumors about him quitting MMA to try and wrestle in the Olympics:

“That’s not true. I’m a martial artist first and that’s my main job and that’s what I focus on.”

On whether or not he thinks he has reached his peak:

“I think my peak is still ahead. I’m 29 years old, I get better every time, I feel stronger every time, and I’ve changed a lot of things in my training and I try to keep it a secret. I keep it for me and it makes me better. I think I can get much, much better than I am right now.”

On his next fight: