Further From Home, But In The Same Position, Butler Plays For National Championship Tonight
by Eric Schmoldt

One year ago, the Butler Bulldogs were in this exact same spot. OK, maybe not exactly. Last year they played Duke in the national championship just a few miles down the road from their campus. Still, tonight, surprisingly, they’ll play for the title again halfway across the country in Houston. I’ll admit that I’m shocked Butler is back, and I certainly have a bracket to prove it. While I correctly predicted that Connecticut would be playing tonight, I had the Bulldogs losing in their first game to Old Dominion. Oops. But the more you watch, the more you realize that Butler is no fluke. First of all, any team that makes the title game two years in a row simply can’t be. But with Butler it’s easy to see they have a great combination of senior leaders who have been clutch in close games, young talent that has meshed with the veterans well and a young coach who is proving he’s amongst the best in the business. Perhaps that all adds up to the Bulldogs finding themselves in a different spot tonight than a year ago. Perhaps they’ll win it all. Butler athletic director Barry Collier joined 1070 The Fan in Indianapolis with Grady and Big Joe to discuss the unlikeliness of Butler being in this spot for a second straight year, how it happened, how he’ll use the money Butler is making because of it, the challenge of facing Connecticut and the differences in the two title game appearances. 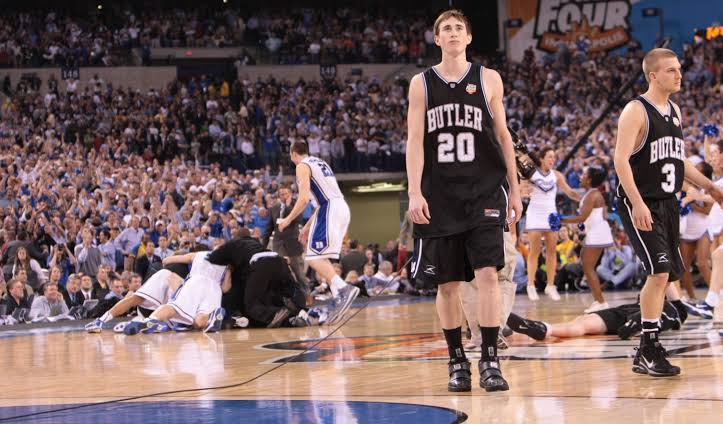 Did he ever imagine the Bulldogs playing in the title game in back-to-back years?:

“I don’t think there’s any way you’d know that or think about it or dream it. Our focus has always been on the next game or the next task, yet here we are and it’s a beautiful thing.”

How has this happened?:

“You have to have a lot of things come together. Mostly, you have to have a team made of players, and don’t miss that they’re the ones that are making the shots, blocking out, playing together, playing hard on defense. And you’ve got to have a coach that can bring all those players to the school and get the most out of them. We’ve got some good things going at Butler. As far as what affects recruiting, we’ve got a great school we’re in a great city and we’ve got a beautiful campus. Then you stark thinking about Hinkle Fieldhouse and basketball and winning and we’ve got a good thing going.” What will he do with the money that Butler gets from making the Final Four and championship game?:“Most of all, we’re going to try to raise money to preserve Hinkle Fieldhouse. We’ve got a fundraising project underway on that.The other thing is that we’ve got another classic, historic piece at Butler, Brad Stevens. He’s maybe not as old as Hinkle Fieldhouse, but he’s certainly as valuable. We’re going to keep doing everything we can do to keep improving.”

On the challenge of facing Connecticut:

“Any team that gets in the tournament and advances like they have are incredibly capable of playing great basketball and winning it all. When you have a great individual player like Walker, who makes others better around him, it’s a tough, tough task. Butler’s approach has always been to have five guys guarding the ball to know that they’re supporting each other and helping with penetration or post-ups. Undoubtedly there will be numerous players on both teams that will be key.”

How is the feeling of being in this position the same or different based on being in Houston rather than in their own back yard like last year?:

“On a couple levels last year it was different in that it was the first time that the team has gotten to the Final Four and the championship game. Secondly, it was in our hometown and we had to go a full six miles all the way down to Lucas Oil Stadium. Here we are 1,000 miles away from Indianapolis and yet the scene is strikingly similar in this big-domed stadium and all that comes with the Final Four. This is a little bit different and maybe it allows for some more focus. I’m not sure.”