The friendship between NFL general managers Scott Pioli and Thomas Dimitroff spans back about two decades to when the two were cutting their teeth with the Cleveland Browns. As they put it, Pioli was pushing papers and making coffee and Dimitroff was putting lines on the field. This weekend, the two will square off as opposing GMs when Pioli’s Kansas City Chiefs host Dimitroff’s Atlanta Falcons in Week 1 of the NFL season. It’s not uncommon for two general managers to have good, working relationships with one another, but listening to the banter between these two it’s easy to see it’s something a little different. Scott Pioli and Thomas Dimitroff joined WHB in Kansas City with The Border Patrol to discuss how and when they first met, if they dreamed of getting to this point professionally, how much they talk during the season, the Chiefs’ roster after all the cuts they made, and the impact of Tony Gonzalez on both organizations. 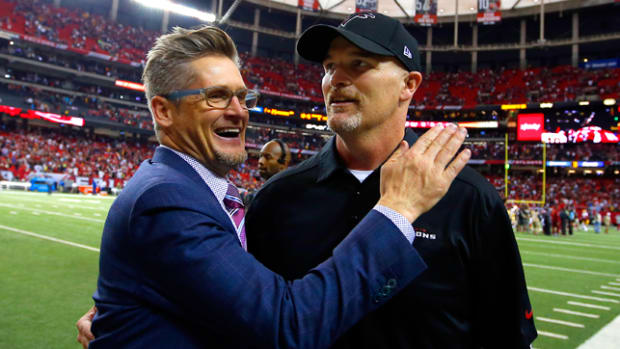 Scott, can you explain how you guys came to know each other well while working in Cleveland?:

“I was hired inp and Thomas’ dad, Tom Sr., was on the staff and he was a regional scout at the time for the Browns. And, correct me if I’m wrong Thomas, but you were in the World League at the time, just as that version of the World League was folding and Thomas moved backp right around Cleveland and Thomas and I were able to meet, work together. We kind of worked together. We were going to the same address each day. You were lining fields and I was making coffee, I think.”

Did you guys ever dream at that time that you could be where you are now?:

Pioli: “I’ll speak for myself. I didn’t have a clue that was going to happen. I was just hoping to get through each day. I don’t think, at that point in time … when you’re starting and working, you’re just worried about getting through the day and making sure you’re doing your job all right. I was never much of a big-picture dreamer like that.” Dimitroff: “Yeah, I think that’s why a guy like Bill Belichick valued Scott’s approach so much. He wasn’t into entitlement. … We both were driven to be as successful as we could be, but there was something about being around that organization, that you’re in a situation where you’re just trying to do your job to the best of your ability.”

How much do you guys get a chance to talk during the football season?:

Pioli: “If you heard how much, actually, probably too much.” Dimitroff: “We’ve had our discussions this week. As competitive as we both are, we both understand that there are a number of things to talk about before going into a game. We’re hoping to get together and spend a little bit of time talking about football in general and life. I want to have an opportunity to see Scott’s great family. We’re very close that way. On the game field, on Sunday, we’ll be turning the corner as far as our focus.”

Scott, how do you feel about your roster now that it’s down to 53 players?:

“I’m still encouraged, I really am. I know there’s a lot of games. Coming right out of the gate, we’ve got some really tough competition. … I do feel that we’ve got a good football team and a well-coached football team. We’ve shown, at different times, that we are that. And then, unfortunately, I don’t know if it’s due to our lack of experience and age, but we’ve shown signs of not playing up to our ability, so it’ll be interesting to see how this team does coming right out of the gate.”

Thomas, what has Tony Gonzalez meant to your franchise since you acquired him from Kansas City?:

“As we all know, Tony is, no question a first-ballot Hall of Famer. He’s been a special addition for us and it was the right addition for us at the time. Honestly, it was a good trade on both sides. It was valuable for both organizations. And that’s, ultimately, what you want in this league, to make sure you can get a deal that is right for both teams. For us, here, Tony has been the quiet leader that he is. He’s not the stomp-around leader, but he’s out there working hard all the time, and he’s been good for Matt Ryan’s transition and evolution as a quarterback in this league.”

“First, out of the gate, it was tough. Even though I hadn’t been with Tony here, I had so much respect for him as a player. And I knew that he was a good player that still had more time left on his clock to be a good player. Thomas, it just so happened, he and I had talked and he was interested. Tony had made it clear, in a very professional, respectful way that he didn’t demand his way out, he made more of a request that if we would ever consider it, he would love for us to consider moving him. … The other thing that was really important, as he and I talked, was the fact that we hoped that when he does retire, whenever that time is, that he does retire as a Kansas City Chief. … I felt everyone was winning. I felt Tony was going to win, the Chiefs were going to win, the Falcons were going to win.”