The last time that Antonio Margarito was inside a boxing arena he was found with an illegal knuckle pad in his hand wraps before a fight with Shane Mosley. After he was found cheating, he was forced to stay away from boxing for a year and it was uncertain whether or not he would actually fight again. However, after failed attempts to get Manny Pacquiao in the ring against Floyd Mayweather Jr, Pacquiao’s camp had to find a new opponent and fighting against Margarito is really the only thing that makes sense at this point in time. Margarito has been looking for a shot to just get back in the ring and now he’s going to step between the ropes against arguably the best pound for pound fighter in the sport. While I don’t think he’s going to be able to win this fight against Pacman, the fact that he is back in the sport after being caught cheating is a step in the right direction for Margarito.Freddie Roach joined ESPN Radio in LA with Andrew Siciliano and Mychal Thompson to talk about the upcoming fight between Manny Pacquiao and Antonio Margarito, how good his training camp was, what problems Margarito presents to Pacquiao, whether or not he is concerned with Margarito when he gets wrapped, and if he expects the Mayweather-Pacquiao fight to happen. 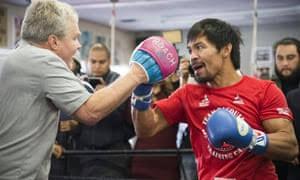 On having a bad training camp:

“We had maybe our worst training camp ever. We’ve never had a bad one and comparative-wise it’s probably better than most people’s training camps. Manny missed one day because the President wanted to meet him and I was little pissed off about that. I told the President he can see him on his own time, not mine. We’re back on track. As soon as we got to LA, the focus was 100 percent better. We went 15 rounds yesterday with no rest period. He knows what he has to do and he assured me that I will not disappoint you. He’s on fire right now. I slept great last night because he really got his focus, there’s no politics here in America for him, and no problems at all.”

On whether or not Manny Pacquiao has lost a step:

“Not yet and I’m amazed by that. Going for his eighth world title and all these different weight classes I thought his speed may be affected by his growth also. He has power at this weight and his speed is as great as always.”

On the size of Margarito and whether or not that will be a problem:

“The reach advantage is easy to take away. It’s all about the distance and we’ve got the distance and timing of our shots down. The thing is speed is going to win this fight. Manny is going to hit him four or five punch combination and get out. Margarito is going to be swinging wide. You can beat him down the middle all night long. He’s wide with all his punches. He can’t throw a straight punch if he had to. His footwork is terrible and we will take advantage of that. I’ve studied him quite a bit. He’s a tough guy. He’s got a good chin and that’s his best asset. Overall his boxing skills, he can’t hang with my guy.”

On whether or not he will monitor Margarito when he gets wrapped:

“I’ll be right on top of it. I don’t trust anyone in this sport. They’ll be no mistakes. I will be in the dressing room the whole time he’s wrapping his hands and that won’t be a problem.”

Whether or not the Mayweather fight will happen:

“I hope so because that is the biggest challenge in the world for us. Mayweather, he’s a little crazy and all that, but he can fight. He’s a good boxer and I just hope that fight happens because that’s the only challenge out there. I feel if he doesn’t come to the table that we might have no options and Manny might just go to Politics and get out of boxing because Maywehather won’t fight him. He’s the only real challenge out there that I can see at this point. I hope that fight happens as bad as you do. A lot of people want to see us kick his ass too and we will do that.”