Frank Mir Says He is Totally Focused on Shane Carwin, not Brock Lesnar

Despite what he says in interviews leading up to his fight this weekend with Shane Carwin, it’s no secret that the fight Frank Mir really wants is a third fight with Brock Lesnar.  Mir won the first meeting with him after Lesnar got a little sloppy and left himself exposed for a submission in his UFC debut.  After the first fight, Mir started running his mouth, but in the rematch he couldn’t back up his talk as Brock Lesnar decimated Frank Mir and proceeded to celebrate and taunt Mir afterwards.  The third fight is something that Lesnar and Mir both want, but there could be one man standing in the way of the rubber match.  That man is Shane Carwin.  If Mir wants to step back inside the cage with Lesnar, he has to get past Carwin first, who is 11-0 and one of the brightest up and coming heavyweights in the UFC.Frank Mir joined ESPN 101 in St Louis with Bryan Burwell and Bob Stelton to talk about why boxing fans should be fans of MMA, what he thinks of his fight against Shane Carwin this weekend, how tough of an adjustment it will be for James Toney, and whether or not he wants a fight against Brock Lesnar next. 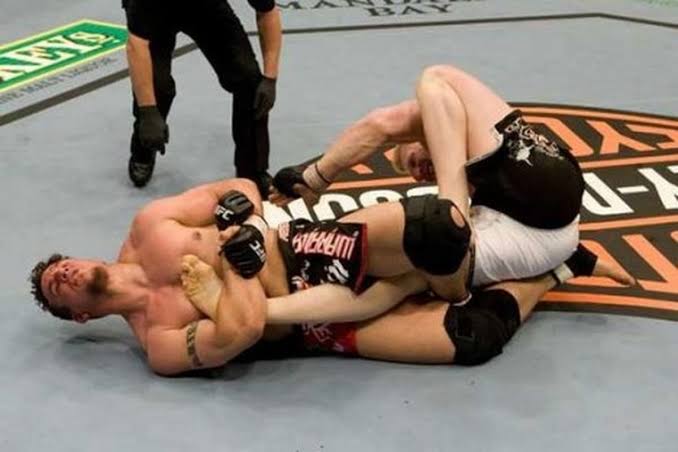 On why people that should be a fan of MMA:

“Well obviously if you like contact sports previously like boxing, football and what not, we’re just an exciting sport.  It’s one on one.  You have to sit and eliminate the boxing hat.  We have such a higher finishing rate as far as fights that finish without decisions that we don’t have the same controversies or the same boring, drawn out fights.  I’m also a fan of boxing.  My father is from Cuba so obviously boxing was big in my household.  But the last couple of years, I’ve personally felt kinda disappointed when I watched boxing matches that were built up with great hype and I watch a twelve round decision where neither guy really risks anything.  You can tell each guy doesn’t want to take any chances.  That’s one thing we just don’t do here at the UFC.  You see fighters all the time, whether they are holding the belt or the first time that they are fighting in the Octagon, guys taking risks and really putting on a great show.  The atmosphere is completely different.  I live in Vegas so I go to boxing matches all the time and I enjoy them.  The atmosphere is completely different in a boxing match than it is in a UFC fight.”

On his opponent’s standup game being better than his:

“I think standup as far as he’s a hard hitter, I would agree.  He does punch hard so if I stood in the pocket with him, it’s always going to be a coin flip at that point.  If I miss a shot and he lands it, it’s not gonna be a very nice night for me.  At the same time he is still relatively new to the sport.  He is a very explosive puncher, but very basic and very straight line.  My last couple of fights, I’ve shown that I use a lot of angles, throw punches in different areas, and I keep myself out of harm by using footwork.  On my feet, I feel comfortable there also as long as I fight intelligently and use the fact that I have a lot more experience and use the range to my advantage.”

On how he thinks James Toney will do in the sport and what he has to learn:

“Obviously he has the hands and the boxing element of our sport, would be light years ahead of where a lot of guys would be starting off.  James Toney is a world class boxer.  I’ve always watched him box and been a huge fan of him since I even watched him fight Roy Jones in an unsuccessful bout and I still was a huge fan.  There’s just so many elements to our sport that you have to acknowledge those.  There’s even things in boxing that you can do that you can’t do in our sport because of the fact that the stance is different.  You can’t stand with one leg so far forward ahead of the other leg because in our sport we’ll just reach down and grab your leg and you’ll go to the ground and the boxing element is removed completely.  If he wants to use his boxing, stand in the pocket, slipping and punching and standing right in front of somebody making them miss, it’s a little more difficult because when we throw a punch and immediately clinch, there’s no referee to break the fight after the clinch.  Like before the clinch would’ve been a rest in boxing.  The minute we clinch, the fight is still going on in a very aggressive manner.  He’d have to take up some of the grappling aspects and really try to work on avoiding the ground not because he can’t develop skills there but he would probably, I would assume, want to keep it as much as possible in boxing range.”

On whether or not he would like a rematch after this fight if he beats Shane Carwin:

“I would be lying if I said that wasn’t true.  Right now I’m just interested in Shane Carwin this weekend.  That’s the first step into accomplishing any goals.  Hopefully being successful Saturday I would really look forward to a certain matchup.”