Former Patriots Quarterback Steve Grogan: “Jack Tatum is one guy that I just can’t find anything nice to say about…This is a man who wasn’t a good person.”

Jack Tatum, the notorious former defensive back for the Oakland Raiders, passed away earlier this week. He’ll of course be missed by his family and friends, but the same can’t be said for many of the men he competed against during his ten year career in the National Football League. One such guy with nothing nice to say about Tatum is Steve Grogan, the quarterback of the New England Patriots in the late 1970s. In a 1978 preseason game, Grogan overthrew receiver Darryl Stingley over the middle of the field. In came Tatum to lay a devastating hit on Stingley that ultimately left him paralyzed. Tatum showed no remorse or regret for the hit – or any of the countless devastating blows he administered throughout his career. He even tried to profiteer from the sad incident through book deals and television shows. Sick stuff, though Tatum insists he tried to reach out to Stingley at the hospital but was turned away by his family. Grogan ain’t buying it though, as you’ll hear.Grogan joined 98.5 The Sports Hub in Boston with Mike Felger and Tony Massarotti to talk about how he has nothing nice to say about Tatum as a person, the play that left Stingley paralyzed, how he thought the hit was unnecessary even if not dirty, Tatum’s lack of class about visiting Stingley or reaching out to him after the incident, and how he agrees with the NFL’s measures to try to legislate those types of hits out of the game. 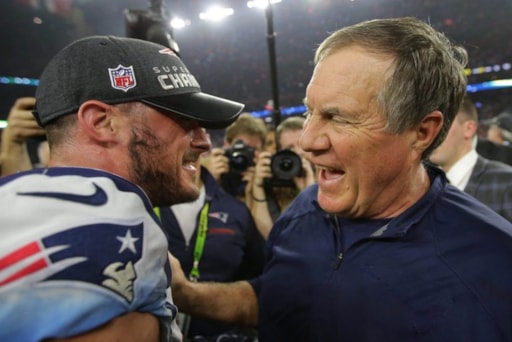 On the passing of Tatum and what he remembers about him as a person:

“I guess it doesn’t surprise me. I read that he’s had some health issues the past several years in magazines and newspapers. I just got off the phone with somebody at ESPN talking about the same thing, and I was telling him that there’s not too many people that I can’t find something nice to say about when this kind of situation arises. But unfortunately Jack Tatum is one guy that I just can’t find anything nice to say about. Just the way he handles the whole situation – it bothers me that I feel that way, but to never apologize to Darryl, to try to make money off the whole situation, never showing any regret or remorse. This is a man who wasn’t a good person.”

On the actual play that paralyzed Stingley and if he thought it was a dirty hit:

“It was a hit that I probably wouldn’t call dirty, but it was unnecessary. It was a preseason game, it was a ball that I threw late, overthrew because I did throw late and was just trying to throw it away. Darryl went up into the air and normally in a preseason game, guys take care of each other in those situations. And Darryl just happened to get caught with his head in the wrong position, and Tatum just blasted him for no obvious reason in a game like that. I saw hundreds of hits like that before and after, and it’s just unfortunately in Darryl’s situation that it caused paralysis, and in all the other situations the guy got up and continued to play.”

On what else he could share about Tatum as a person:

“I can’t speak to that. I know Darryl was a great guy and I’m sure if Tatum had extended a hand to him and reached across the aisle and tried to at least apologize, Darryl probably would have accepted that. But that never happened, and as far as I know, Darryl resented the fact that Tatum never talked to him, and as Michael was saying the only time he ever really made contact with him was when he wanted to write a book or do a T.V. show and make some money off the whole thing.”

On how some of the other Raiders players and coaches showed extreme kindness and concern towards Stingley unlike Tatum:

“From what I understand, Coach Madden was great with Darryl. And I’m sure there were other Raiders players that visited him. I can’t tell you names right now, and in all honesty, you may talk to some of the Raiders off that time and they may tell you that Jack Tatum was a great guy and a great football player. Our experience with him is that he was just not a nice person, and did something to one of our players that could have been avoided, and never showed any remorse for it. And it’s hard to forgive that.”

On how the NFL has gotten more serious in recent years about cracking down on these kinds of dangerously violent hits:

“I think the game can be played very physically without having to take the shots that everyone wants to get on ESPN. Everybody wants to see their hit make the highlights and I think that’s what the game is trying to legislate out of the NFL. Those kinds of hits are just totally unnecessary and cause a lot of damage that actually they don’t need. Players are too valuable these days; they’ve got too much money invested in these guys to have them sitting on the sideline. So they’re trying to take better care of that and I agree with that.”