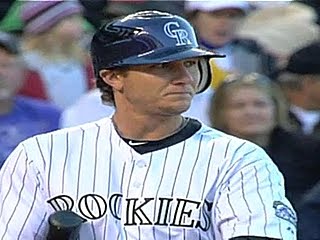 ulowitzki moves his hips like “Yeah!” every time he goes to the plate in Colorado. That’s the same guy who finished in the top five in National League MVP voting last season. One could easily make the argument that “Tulo” is the second most important position player to his team in the NL. He plays some of the best defense we have ever seen at the shortstop position, which is especially critical in an offensively oriented ballpark, and he can hit for average and power.Want to know why the Rockies made the World Series It had more to do with defensive upgrades than the offensive numbers. The more extreme the ballpark – whether it’s Coors Field or Petco Park – the more important it is to limit the number of opportunities for the opposition – making defense critical. Colorado gets that. The Rockies just may not get why Tulo has to nod his head like “Yeah!” in the process.Troy Tulowitzki joined Darren Smith on XX Radio in San Diego to talk about his entrance music, Petco Park, hot and cold streaks, and Miguel Olivo’s kidney stone.

On using Miley Cyrus as his at-bat music:

“Yeah. Without a doubt. I have a lot of high school girl fans if you will. For some reason, that’s my fan club out there in Denver. Why not please them with a little Miley Cyrus. I don’t mind it at all. You keep the fans happy and you don’t worry about yourself, the less boos you are going to get.”

On playing in Petco:

“Obviously, I don’t think I have my best swing this series. Give them credit too, their pitchers have done a good job. Great pitching staff with obviously one of the best bullpens. It is tough to hit here, but at the same time, when you ground out, the park doesn’t really play into effect. I guess the ball just doesn’t carry on the ground very well here.”

On hot and cold streaks:

“There will be times where they will not be able to get me out either. And they are going to be looking back on all kinds of things wondering that this is what the scouting report says, but we are not able to get him out. That’s just the way this game is. You’re going to be hot. You are going to be cold. When you are cold, you have to try to end it pretty quick. And when you are hot you try to ride it out as long as you can.”

And on Miguel Olivo passing a kidney stone during a game:

“That’s the rumor.  If anybody can do it, it would be him. This guy is one of the toughest guys that I have ever played with. I just remember always playing against him and like, ‘Man, if I ever thought about getting in a little scuffle with the pitcher and Olivo was behind homeplate, I would think twice.’ Now it’s funny that I play with him and I am glad to have him on our side.”