Eugene Levy Is On His Seventh American Pie Movie

Eugene Levy is a comedic genius. He’s also a Canadian! Woo. Yeah. Alright. Sure, he’s still going strong on the whole “American Pie” thing even though it’s totally miserable in its seventh stage, but to each his own. Besides, if I was getting paid, I’d probably do it too. (And yes, by “it” I mean, whatever. I have no shame.)Levy stopped by the Petros and Money show on KLAC recently to talk Canadian Sports, as well as his soon-to-be induction into some sort of Hall of Fame that revolves around Canada and comedy (no word as to whether Terrance and Phillip will appear) and rehash why American Pie hasn’t died off yet. 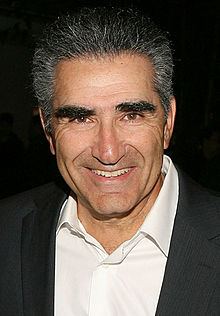 On being a sports star:

“You know what? I’m probably the only Canadian who can’t skate.”

On the American Pie franchise:

“It’s the gift that keeps on giving, I call it. They’re on 7 I think … 3 was the last theatrical one and the last four have been straight to DVD I think. But I always try to look after my character in each and every one of these things and make sure that Jim’s dad is protected and they don’t try and make me do anything insane. And I, uh, have a lot of say in what it is I do and what I don’t do, so in that sense, I feel pretty good about it. Always true to the character. Did I think it was going to be what it was? When you think about the fact that in the very first American Pie, when I read the script, my thought was: “What do you want to do this for? Why would you want to be in a movie you wouldn’t want to go and see?” It read really rough.”