Coming off their championship season last year, the Miami Heat have struggled at times early this season with consistency. Dwyane Wade has struggled early on coming off surgery on his knee and Miami is also trying to adjust to new players in their rotation this season like Ray Allen and Rashard Lewis so there has been a bit of an adjustment. There have been some tough losses this season. Two of them against New York come to mind but it just seems like natural struggles for a team trying to repeat as champion. Through it all Miami still holds the second best record in the Eastern Conference and their best basketball is still yet to be played.Erik Spoelstra joined WQAM in Miami with Joe Rose to talk about the way the Knicks and Carmelo Anthony are playing early in the season, if he thinks his team is playing down to its competition, on Ray Allen’s ability to hit clutch shots for the Heat this season, what they have to do to get Mario Chalmers playing well again and whether Dwyane Wade is motivated by some of the criticism he has received early this season. 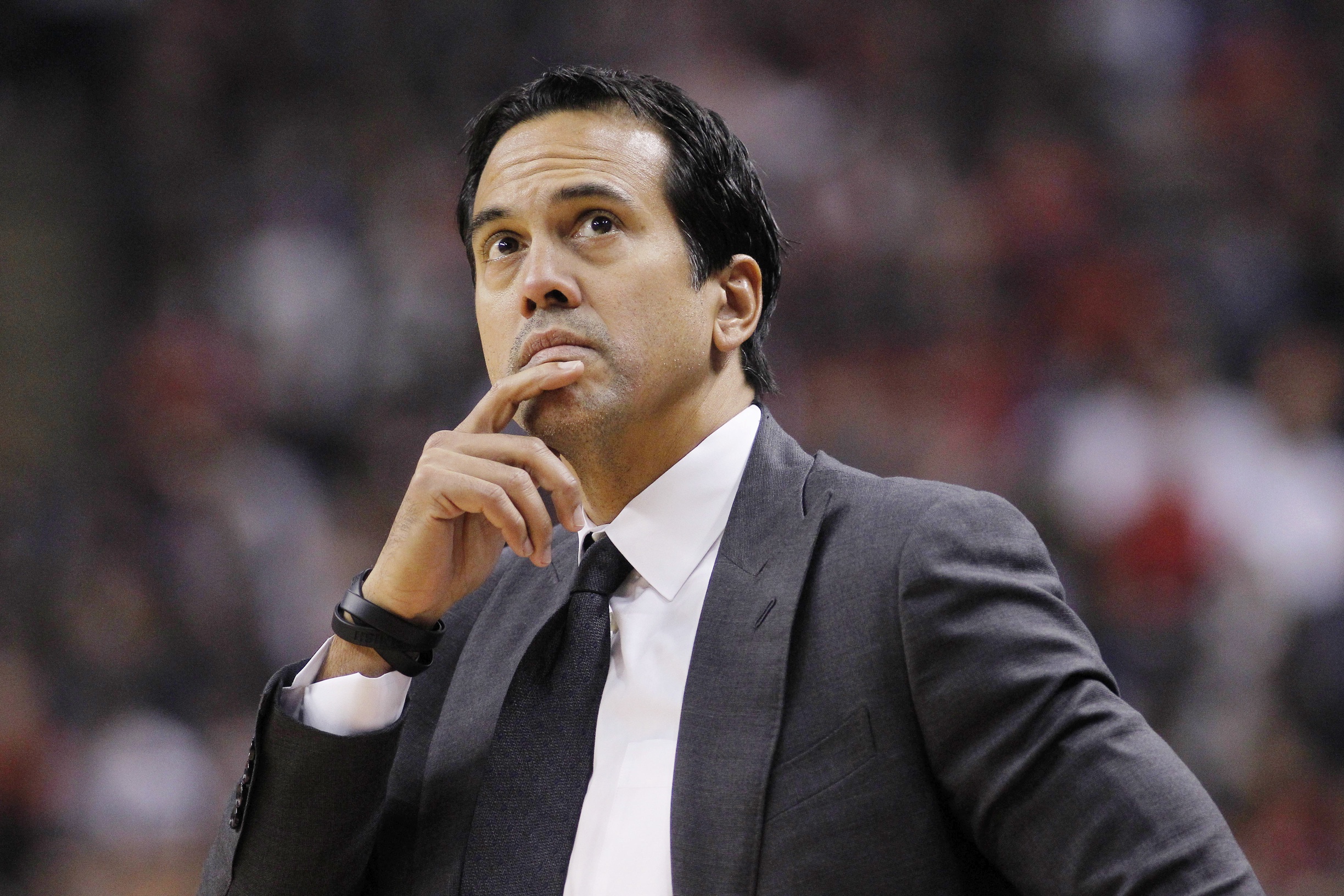 On the way the Knicks and Carmelo Anthony are playing early in the season:

“He’s playing at an extremely high level so you have to give it to him. And they’re playing great basketball right now. Obviously they have knocked us on the ground twice this year in both buildings so it is a great start. They have championship caliber players and guys that have proven it and Carmelo coming off the summer he had is off to his most productive year in terms of leading a team and doing it in a lot of different ways.”

If he thinks his team is playing down to its competition:

“We certainly are getting the most motivation from other teams. They’re fired up to play us and rightly so. We earned the right to have that big X on our back where people are coming after us. If we treat it the right way that will only help us in the playoffs but we’re working on our consistency. Yes these have been great finishes and we have been doing things in the fourth quarter, I don’t think our guys are overlooking the competition but we’re searching and striving for consistency. We haven’t found it to the level that we’re capable of.”

On Ray Allen’s ability to hit clutch shots for the Heat this season:

“That’s who he is Joe. It’s not something that should be a surprise because he has done it in so many uniforms. He does it in the fourth quarter and in the biggest moments. For all of Miami Heat nation, we have felt his pain of all the big shots he hit against us. That’s what he is continuing to do to be one of the most lethal and dangerous weapons in the game.”

What he has to do to get Mario Chalmers playing well again:

“We’ve driven and pushed Mario really hard but right now I think we have to give him some confidence because he is a proven championship point guard and we play at an entirely different level and we don’t feel like we can get beat when he plays well. It’s a symbiotic relationship so we all have to work together. He’s got to work to get back to his game and play the way he’s capable of playing and we have to work and I have to do it as a head coach to give him some confidence and get him playing aggressively again and playing where he’s at his best so we can go to another level. That’s going to happen. We met yesterday and we have been spending time after practices, he puts in the time so it’s just a matter of time. Players go through this, even veteran players. You go through some segments where it’s just not here. As long as everybody is pure about it and you don’t overreact to it, you get it back quickly and that is what we anticipate with Mario.”

Whether Dwyane Wade is being motivated by some of the criticism he has gotten early in the season:

“I don’t know if he gets motivated by a specific comment or what people are saying. I think everybody takes what Charles (Barkley) says with a grain of salt. I don’t think anybody is putting his stuff up on a bulletin board. He says so many things that it would take a whole room to put stuff up there. He’s motivated by playing at an elite level. He’s coming off knee surgery and we talked about it. We knew about it in the preseason. I had a conversation with Dwyane. I said ‘okay here are expectations, I want you to get stronger, healthier and play more efficient as the season goes on and there’s going to be ups and downs at the beginning of the season, that’s inevitable.’ He missed the summer, he was able to participate in the preseason but you don’t just jump into the season playing at a top five level that he has always been accustomed to playing. Now I also had a conversation with him that people are going to judge, probably harshly judge and make assumptions early on when you’re going through these ups and downs and we all need to be on the same page and weather it. Not worry about what other people are saying, just stay on the same course and remember what the big picture is. Your best, healthiest and strongest basketball has to be coming during the spring stretch run.”