Erik Spoelstra has made his way from the bottom rung of the Miami Heat organization dating back to 1995, when he joined the staff as the team’s video coordinator. Fast forward to April of 2008 as Spoelstra was named successor to Pat Riley as the new head coach of the Miami Heat. Pat Riley preached that the Heat organization wanted to get younger with their coach and Spoelstra was given the dream job he always wanted. I’m not sure if he could have expected the hurricane that would hit his Miami Heat team during the summer of 2010. Dwyane Wade re-signed with the Heat, Chris Bosh decided to ditch the Toronto Raptors in free agency and join forces with Wade in Miami. The ultimate stunner came from LeBron “King” James himself as he decided to take his “talents” to South Beach in his bizarre  television special.Somehow lost in all of this Erik Spoelstra did not quite realize all the scrutiny and attention his team would receive from fans and the media. 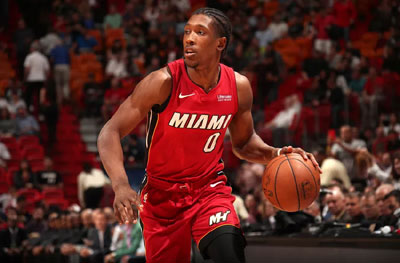 It couldn’t have been that party the Heat threw to introduce their big three back in the offseason?

The party was complete with smoke, fireworks and music. The Heat asked for the target on their back just as my fellow colleagues have written here on the SRI platform. It’s been a roller coaster season for Miami with stretches where the team had won twenty-one of twenty-two games in December. The Heat than lost five straight two weeks ago sprinkled in with Spoelstra saying his team cried after a tough loss to the Bulls during that stretch. The Heat sit at 49-22, third in the Eastern Conference, looking to take down the Boston Celtics and Chicago Bulls ahead of them. Spoelstra believes his team has improved, but they’re not quite there yet in terms of being the best team in the playoffs. Erik Spoelstra joined 790 the Ticket in Miami on the Dan LeBatard Show with Stugotz to discuss the most difficult spot for him during this circus-like season for the Miami Heat, if he feels like the regular season has been playoff game type pressure for his team, what is one thing he would go back and do over this season, did he apologize to his team for telling the media they were crying after a loss to the Chicago Bulls and does he have the best team heading into the NBA playoffs.

As you look back on the season what was the most difficult spot?

Do you feel like these 82 games are contests that you are playing as if they were playoff games because of the pressure that has been put on you guys?

“I have no doubt about it. You see that every year in the playoffs. Teams that have been together and they come up short. They dedicate their whole summer and the next season for whatever their failings were during the playoffs. We don’t have that time. We’re trying to fast track that whole process with nine new players and there aren’t any excuses. We want to do it now. We feel like we have enough, but you have to go through some pain and adversity to be very honest with yourself. And what we went through two weeks ago we lost five straight, I actually felt better about that process that we were going through during that stretch that I felt about our team in December when we won twenty-one out of twenty-two games because we were not building a game that was ready to beat elite team in the playoffs in December.Now we were going through a lot of pain and figuring out exactly where we needed to improve and what we needed to address to get ourselves ready for the spring two weeks ago and that I think was something we needed to go through and that’s probably not going to be our last one either.”

What is one thing you would go back and do over this season? Was it the crying comment to the media after the game?

“I wouldn’t have said it [the players were crying after the Chicago Bulls lose]. I mean the players…we don’t have a problem with it because everybody has been in a situation where their words have been taken out of context. In a strange way we’ve all been through this together and everybody in something where they have tried to say something to the team that has been taken out of context and it strengthened us. I brought it up to the team the next day and there wasn’t any broken trust. You know you’re in front of the media three times a day eventually something you’re going to say is probably not going to have the meaning you would have expected. I wouldn’t have said it if I had a do over just so I would eliminate one more distraction, but my point about it was the guys do care. I think it is great that we have some incredible, incredibly competitive, self-willed guys in this locker room, but this means a lot more to them, their profession.”

Did you have to apologize to the players for making the crying comment to the media?

“No. No I didn’t apologize to them. We talked about it just from a media standpoint. Everybody kind of smiled about it because everybody has been in that situation before. It didn’t warrant an apology, but it was something that was discussed. Much like other things there is usually a topic once a week that I have to address to the team and usually it’s something that brought up by our public relations director, Tim Donovan.”

Do you have the best team headed into the playoffs?