Steve McNair was selected by the Houston Oilers back in 1995. McNair, who was tragically found murdered this past Sunday, immediately turned around the fortunes of the franchise. The year before Air McNair was drafted, the Oilers went 2-14; in 1995, McNair would start only two games, but he won both and the team was more than heading in the right direction with a 7-9 season. The following year in 1996, the organization selected running back Eddie George out of Ohio State. The duo would play together through the 2003 season before George left Nashville (the team left Houston before the 1997 season) to play the final year of his career in Dallas.  The franchise would have only one losing season during the eight years that George and McNair played together and wound up just a few yards shy of forcing overtime in Super Bowl XXXIV. 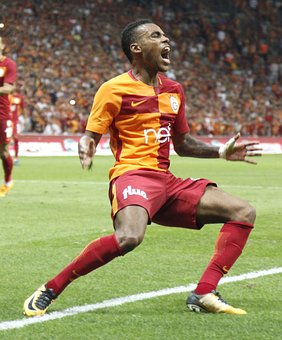 On how he is coping with the loss of McNair:

“I’m taking it one minute at a time. You know one day at a time, trying to get my head wrapped around the idea that Steve is gone in the physical form. I’m dealing with the whole stage of it. First you deal with the shock of the death. Then there’s a stage of denial, then acceptance and then you move on. It’s going to be a tough week because of the services. You have to move on you have to take care of his body, you have to get the indication of the funeral and the services and so it’s going to be a tough week. And one more for his family than us as his teammates. I can only imagine what their going through with the sudden and tragic death of Steve. You don’t ever want to see anyone go through this, but certainly someone of Steve’s stature, and what he accomplished and what he meant in terms of the community this is a tragic death that we’ve witnessed.”

On whether it’s been tough for him  to read some of the things that have been said about Steve off the field and about his relationship with that woman since his passing:

“When you look at it, you don’t want his dirty laundry out there, so it’s tough to some extent but no one in this world is perfect and we’ve all had our share of issues, but its tough to speculate and draw conclusions when we don’t know in fact what went on in in his home and in his household, what they we’re going through. What the relationship was or wasn’t, and to throw dirt is unfathomable because we are not perfect human beings, no one is. We all have our issues we’ve all done wrong. But the fact of the matter, the big picture is that two lives were lost, regardless of how you cut it. And none one deserves to exit the world that way.”

On how he and Steve relied on each other to get through their first years as professionals in Houston:

“Well, yea all we had was us. We had to entertain ourselves; we had to find some type of peace within the whole move, because it was very tough. How we were treated in town in both place, Houston and Tennessee, we weren’t well accepted. So, football here was pretty much a joke at the particular time. Steve and I and the rest of the team were really focused on being a prominent football team in the NFL and we couldn’t wait for the day that we got a new stadium, new uniforms, a new identity and it was a tough transition period to find some things to look forward to and Steve and I would often talk about what it would be like to finally have a stadium and had a facility and something that we would be proud of and we loved that we cherished that and we built this team together, and not just myself and Steve, but the rest of the guys that came from Houston and were drafted in that era, we really worked hard to make a name for ourselves.”

On if there is one singular on-field moment that defines the memory he will have of Steve for years to come?

“Absolutely, it was the Giants. We played the Giants in 2003 and we were losing the game I believe by 12 points at this particular time and we had to go to the five-wide offense, and Steve played. He wasn’t supposed to play, wound up playing in the game and won it for us in overtime pretty much all by himself. He was so on point with his throws and knowing where to go with the football and reading the defense and he was in the zone. And that carried us that year to the AFC Championship out in Oakland, and I’ll never forget that, just how he commanded the field, his leadership, his poise, how he played hurt. Everything you’d want to see in a quarterback he possessed that that day and there after. That’s when everything came together for him in his career and it was phenomenal to witness that.”