Dwyane Wade: What Happened in L.A. During the Offseason Was Great

With the way that Dwyane Wade, LeBron James and Chris Bosh came together in Miami, Wade probably couldn’t have afforded to come out and discredit the big moves in Los Angeles during the offseason. But he probably didn’t have to come out and say that the moves were great, either.Yet that’s just what the Heat guard did here, saying what went down with the Lakers picking up Dwight Howard and Steve Nash while hanging on to Kobe Bryant and Pau Gasol was great for the league and the fans. Wade says the Heat won’t run away from the challenge as they gear up for their bid to repeat as NBA Champions.Dwyane Wade joined KNBR in San Francisco with Murph and Mac to discuss Wade’s new book that came out this week, if he’s still as hungry as ever, his happiness for LeBron James, winning an Olympic gold medal in London, and the bid to repeat given the moves of the Lakers and hunger of the Oklahoma City Thunder. 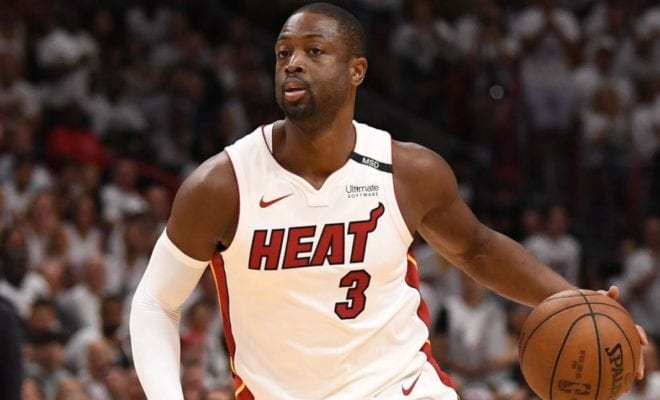 Talk about the idea to write a book:

“I have a book coming out today called ‘A Father First: How My Life Became Bigger Than Basketball.’ As simple as I can say it, it’s really me sharing my personal experiences through life. I really focus on what’s important to me. And what’s important to me is being a father. It’s no secret in this world that that has been a missing piece to a lot of kids. … I kind of go through and share why it’s important to me. I’m not telling no one else that this is what they have to do, but I go through and share my personal experience. … As well, I wrote it for my boys. I wanted them to understand and hopefully learn from my steps in life, successful or not.”

How hard is it to be the father you want to be given the life of an NBA star?:

“Obviously I love my kids so much and love being a father that I would love to be there every day and not miss anything. But I think in today’s world, it’s different. You can find a way to still be involved. I think staying in constant communication with my kids helps me feel involved, helps them feel involved in my life when I’m gone. So, with all the social media … it just makes it a lot easier to still be able to have that voice and still feel a part of someone’s life.”

Are you still as hungry on the basketball court now as you have been in the past?:

“You devote a lot, obviously to being a father. It becomes the most important thing when you’re young. When you’re playing basketball, the most important thing is you want to make it. You want to make a name for yourself. As you get older, you understand there are more important things in life, but that doesn’t take away your joy for the game, doesn’t take away your hunger for wanting to be the best, wanting to be successful. For me, I just took a different approach in the later parts of my career than I did in the beginning. … Now my approach is I want team success. The individual success was great and helped out so much for my family, but I know what makes me happy.”

If I say the name LeBron James, what comes to mind?:

“LeBron James, I think the first thing that comes to mind is a smile because I’m happy for him. I’m happy that he got that championship and, at least for a little while, he got people off his back. So I’m just happy for him as a friend and as a brother.”

On winning the gold medal in London:

“Unbelievable experience. It’s something that you will be proud of and be able to tell your grandkids about one day.”

How will the Heat refuel and come back for another run given a hungry Oklahoma City team and a budding Lakers team that made a bunch of moves?:

“There’s only one way to find out. I think that’s great, first of all, for the league and the sport’s fans. They’re excited about everything that happened in L.A. this summer. They have a very good team on paper, future Hall of Famers, and can be very, very good. But we don’t run away from challenges in our league. Oklahoma I’m sure feels very confident in learning from last year and losing in the Finals and we do as well. We’ve only been together two years. We’re still growing as a team and we’re going to continue to get better. So, I look forward to it. This is why we play the game.”