Dwight Howard Would Take Carmelo over LeBron or Kobe Last year the Magic surprised many people around the NBA by getting to the Finals before ultimately losing to Kobe Bryant and the Lakers.  This season, Orlando was looking to duplicate their success from a season ago and show that wasn’t a fluke.  And while they have the third best record in the Eastern Conference and they are one of the best teams in the league, they just haven’t looked like the same dangerous team.  It’s obviously too early to place a final judgment on any NBA team and that includes the Magic, it just seems like something is missing.  They’ve already had some head scratching losses against teams like Indiana, Washington and Detroit and have just two wins in their last seven games.They lost Hedo Turkoglu in the off-season and tried to replace him with Vince Carter, who has really not played that well, they have once again dealt with injuries, and they have still not figured out how to get the ball into their best player’s hands enough. 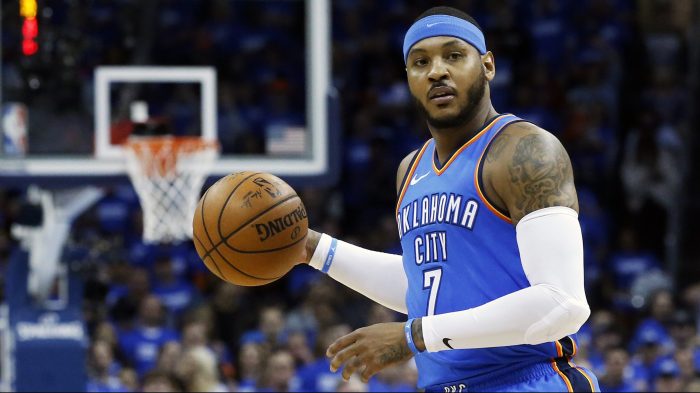 One of the biggest reasons for the team’s success last year was the play of Dwight Howard.  Aseason ago Dwight averaged about 21 points and 14 rebounds per game and looked like he was about to become a premier scorer in the NBA.  Well this season, he is getting just nine shot attempts per game and his points per game are down to so far this year.  The Magic are still very much alegitimate championship caliber team and you’d be crazy to write them off because of this losing skid that they’re on, but if they want to reach the same heights that they reached a season ago, they need to find a way to keep Superman more involved in the game plan and find a way to get him more than just nine shots per game.  Dwight Howard joined  the Fan in Denver with Alfred and DMac to talk about his free throw shooting this season, the lack of true big men in the NBA nowadays, and whether or not he is playing on participating in the dunk contest.

On the potential of having a Nuggets and Magic NBA Finals after coming close last year:

“That woulda been fun.  It woulda been two teams that nobody expected to even get as far as we did to be playing for a world championship so it woulda been great.  It didn’t happen that way, but we got this year so hopefully we’ll both be in the finals this year.”

Host: We were having an argument about you and Carmelo Anthony and I said I would take you if you made your free throws:

“Well, I’ve been making them of late.  Hopefully I can keep it going.  Been really working on ‘em so it’s just all about confidence and belief that I can go up there and knock ‘em down.  I practice them a lot.  I would take Carmelo though.  I tell my friends all the time if I had to chose between LeBron, Kobe and Carmelo, I’m gonna choose Carmelo. (Host: But Kobe and Dwyane (Wade) have rings)   Dwyane wasn’t in this one.  (Host: Are you saying this because you’re on in Denver?)  No, I really like Carmelo.  I think he’s probably one of the best offensive players in the game today.  He can really score.  I had the opportunity to play with him in the Olympics and he scores in bunches.  You look up and he’ll have 15 points in the first quarter.  He’s just that talented.  I really like watching him play.  He’s great and I think he’s a great player.”

On the lack of big men in the NBA:

“I don’t know.  I don’t know why I’m considered a big man.  I’m only 6-9 (laughing).  No, I’m just kidding.  I don’t know.  I think the game is just a different game than it was back in the day.  Not a lot of guys that play through the post.  There are a couple of guys, but it’s just tough when you’ve got so many guards, you’ve got so many big forwards who can post up, who can shoot threes and who can handle the ball.  I guess being a center is a lost art.  Nobody wants to be a center and just say I play the five position.  A lot of guys would rather play the small forward or the power forward.  Somebody says Center, they’re just like ugh.”

On getting fouled as hard as he does and what goes through his mind when that happens:

“The first thing that I think is I wanna go back at ‘em.  But I understand that what they’re doing is they don’t want me to get a shot attempt up.  It took a lot of patience.  Some days it’s harder than other days to just try to play without frustration.  I know the reason teams do that is to frustrate me.  If they can get me out of my game it messes up the whole flow for my whole team.  So I just try to not get frustrated even though it is tough.  I’ve had guys grab me around the neck, pull me down, I’ve been punched in the face and all that, but I just try to stay calm and understand that Superman feels no pain.”

On whether or not he’s going to be in the dunk contest this year: