DeMaurice Smith On Current Climate Of CBA “Look we want a deal that is fair and that’s all we want.” by Steven Cuce

With the conclusion of Super Bowl XLV in Arlington, Texas on Sunday the National Football League has a lot of work to do in order to keep the most televised professional sport in America on track to play next season. The NFL is on the precipice of a doomsday with a potential lockout looming after the March 4th collective bargaining deadline expires. Will the “golden goose” that is the NFL cease to exist for a season next year? It would be a doomsday scenario and possibly the destruction of a sport that’s only growing in popularity as well as revenue earnings as each season passes. Will Roger Goodell and the owners give way to the Player Association demands under DeMaurice Smith? The owners felt they got the short end of the stick in the last CBA negotiations under Gene Upshaw of the Players Association and Paul Tagliabue who was then the NFL Commissioner. The owners want the players to take a pay cut and essentially agree to an 18-game schedule along with a rookie salary cap. 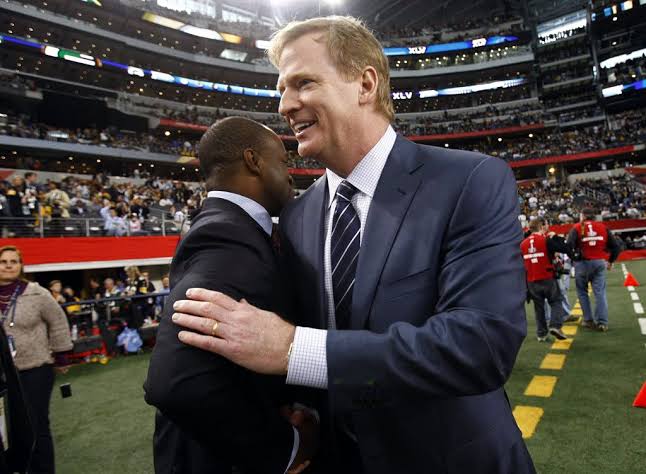 The players of the NFL want the owners to “open their books” and show them why they’re “financially strapped” to give back money ($1 billion per year over 7 years) in their contracts towards league expenses like PSL’s and stadium fees. Whatever the case may be the fans want a deal done as soon as possible because if there’s not a season next year things could get ugly fast not only for the NFL, but for the professional sporting landscape as a whole. DeMaurice Smith joined ESPN New York with the Michael Kay Show to discuss his “gut feeling” right now on the current NFL collective bargaining agreement talks, what would he say is the biggest sticking point for the Players Association, how do you make sure you keep the solidarity amongst the players to win this battle because in the past the players have folded due to their careers being too short to sit out a season, and why won’t Roger Goodell/owners “open the books” for the players to see.

Give me your gut feeling right now how the current NFL collective bargaining agreement talks are going?

“Look we had a meeting on Saturday that was beneficial. I think productive because the two sides are talking. I think it’s better that we sit down and try to figure out the best way to get a deal done as quickly as possible. I think any time we do that it’s beneficial.”

What would you say is the biggest sticking point?

“Well the owners have asked the players to give them back a billion dollars a year for the next seven years. So for you, for the fans out there, they’ve [Owners] have asked the players to write them what amounts to basically a $7 billion check. The one thing that I think everybody out there would agree is before you wrote a $7 billion dollar check you’d ask yourself a couple of questions. One, why the $7 billion dollars? Two, what’s the economic justification for players giving owners a $7 billion dollar payback over the next 7 years in the absence of anything that would suggest that football or the National Football League is on an economic decline, that viewers are on a decline. That there is anything that would seriously jeopardize the NFL’s business model, but for those of you who enjoyed a great Super Bowl like I did, all the predictions about it shattering records for viewership came true. Revenue is up in the National Football League during the most extensive and debilitating recession of our time and every other independent news network or analytical branch that has looked at this including Forbes Magazine or Bloomberg, each and every one of those organizations points to record profits by the NFL teams…Record revenues by the National Football League. The sticking point right now is we haven’t seen any economic justification for a billion dollar per year swing in the relationship between the people who own the teams and the players who only play for about 3-4 years.”

The problem is the perception of the Players Union to the fans. How do you make sure you keep the solidarity amongst the players to win this battle because in the past the players have folded due to their careers being too short to sit out a season?

The results of that is that we have benefits for today’s players that aren’t on par with benefits for baseball players. The results of weaknesses of the past are that none of our contracts are guaranteed. The question that I have put in front of the players as their executive director is exactly what type of association do you want? If you want one that simply relies on the person sitting in this chair to push the rock up the hill by itself I’ll tell you right now you’re going to have an association that is not strong and one that can’t effectively fight for you. As I went around to the teams over the last few years that’s exactly what I spoke to them about. Frankly I’m proud today to not only have the representatives we have, but as you now know we’re probably stronger now as association than we ever have. When I talk to former players about the 12 quarterbacks who have stepped up to be player representatives all of them say to a man “Man we wish we could of had that type of strength in the past.”

Look we want a deal that is fair and that’s all we want. What we have said is that in the face of a historic and unique request by the National Football League to give…for us to give them a billion dollars back the only thing we’ve said is where does the money go? We know that the National Football League has had record revenues and record viewerships and signed record TV deals. If there is a problem with the money they want to invest, if they believe that it is economically justified for the players to give them a billion dollars a year over the next seven years, we do think it is a fair question to ask where exactly does the money go with the respect once revenues come in and what player costs are paid. We do know one thing: player cost as it relates to how revenue comes into football have decreased over the last ugh…five years. Because we know that players cost are not contributing to whatever the owners consider to be their problems we think it’s a fair request to say open the books? Show us! If there’s a problem we’ll fix it. So far we’re being told opening the books is none of our business.”

“Well you know and again I don’t spend a whole heck of a lot of time trying to crawl through other people’s mindsets, but everybody who’s listening to this, and you two [Michael Kay and Don La Greca] you two especially working for such a large organization…if there is one lesson that we have learned through the economic recession and all the things that led to it is when we don’t understand the true economic picture of things…bad things happen. Probably five, six, seven, eight years ago if you walked out onto the street and uttered the words “Financial Transparency” some people would look at you and not know what that means. Everybody understands financial transparency right now, so where the fans are on the issues of what’s going on with this collective bargaining agreement…there are a few things that I can take to the bank. One, I know our fans love football and I know our fans love our teams. We’ve told the National Football League we are willing to play under the existing collective bargaining agreement for another seven years and my guess is no fan except the one’s that couldn’t get into the Super Bowl…no fan thinks there are any major problems with the way the game is being played right now.

The other thing I will take to the bank is I know that every fan out there who would be asked to write a $7 billion dollar check would want to know one thing: where does the money go? That’s all we’ve said. If there’s a change that needs to be made open up the books. Let’s see the full financial transparency of the NFL. It’s important for not only a deal that would be good and fair today, but I know a deal that is good and fair going forward. I mean the simple fact of it is how many former players have you seen, talked to or heard from who are suffering from all sorts of medical conditions. We know that the pensions for former football players aren’t anywhere near where they need to be. We should be moving forward given the strength of our game, the strength of our business model, to make sure that the people who play this game have an adequate pension. That the people who play this game will get adequate medial care for the injuries they suffer at work. Those are all steps we should be doing to move forward not moving backwards by giving a billion dollars back.”

Rashard Mendenhall On Playing Without Maurkice Pouncey “We feel like we can win no matter who’s in.”