Cliff Lee is Still in Shock He’s Not a Phillie

Former Philadelphia Phillies ace and new Seattle Mariner Cliff Lee will be back in the American League after being traded from the team he helped advance to the World Series, to a team with its own aspirations of October greatness. The Mariners will feature a pretty stout 1-2 punch at the top of their rotation with Felix Hernandez and Lee. Throw in the addition of free agent Chone Figgins and suddenly the Mariners look to be in great shape to make a run at the Angels in the AL West.Cliff Lee joined Mike Missanelli on 97.5 the Fanatic in Philadelphia to talk about his time with the Phillies, what exactly happened that led to him being shipped from Philly to Seattle, how it reinforced to him how the business aspect of the game rules out in almost every instance, and how he wouldn’t rule out returning to pitch for the Phillies in the future if things were to shake out that way. 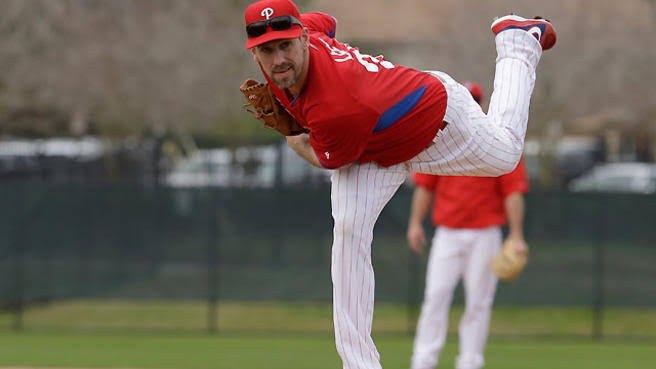 On his run with the Phillies and if he’ll miss playing for Philadelphia:

“At this point I’m a Mariner, so I have to try to make the best of it and go in to this season and try to get to the World Series with the Mariners. Obviously my time with Philadelphia, I enjoyed every minute of it. It was just an unbelievable ride making it to the World Series and helping the team win. It was a lot of fun and I’m going to cherish it forever. And I was hoping to get back there three times in a row with the Phillies but that’s not going to happen, or at least I’m not going to be a part of it. But that’s the nature of the game when you don’t have a no-trade clause. You’re at the mercy of the team and if they decide to trade you then that’s how it goes. It’s a business too and it’s the job of the people who run the teams to try to put out the best team and for years to come. And they felt it was in the best interest of the Phillies to trade me. So that’s their prerogative.”

On if during the negotiating process with Philadelphia, if the Phillies really didn’t do much negotiating and just decided to move Lee without considering some sort of middle ground financially:

“That’d be a good question for Ruben Amaro not me. I don’t know what they thought about. I know I thought they made a pretty substantial offer to begin with. Every conversation that my agent had with them seemed like it was positive. At no point did I ever get the feeling that they were thinking we were too far apart, or it wasn’t going to happen or anything. I was under the impression that every step of the way was good and we were having productive dialogues. So that’s..I don’t know. I was caught off guard. I was caught off guard by the whole thing. The day before it happened I heard all the rumors. I called my agent, he called them and they basically said it was not real. Don’t believe the rumors, don’t believe what you’re hearing. So at that point I thought for sure it wasn’t going to happen, then the next morning they called and confirmed that it did happen. So I don’t know. It is what it is. It shows me that it’s a business. It’s totally a business. I loved it there. All my teammates, coaches, the whole situation. I couldn’t have been any more happy but like I say, hopefully I run in to a similar situation in Seattle and all those guys are great, and things work out and we have a winning team. That’s the only way I can look at it now. It’s a done deal.”

On if he’s mad at how the Phillies told him up until the last minute that they weren’t planning on trading him:

“They can do what they want. Like I said, until you have a no-trade clause as a player, you’re at the mercy of the team. They didn’t even have to offer me a contract, they didn’t have to do anything. That’s their prerogative and they have the power to do that. So I’m not mad at anyone. I’m somewhat disappointed because my heart was in it with the Phillies, but it’s over. I’ve got to go to Seattle now and try to help their team win.”

On if he would consider going back to Philadelphia after this year if that somehow worked itself out:

“There’s a lot of things that are going to happen between now and then, I can’t answer that question. I can tell you this. I loved it in Philadelphia, everything about it. My teammates, the coaches, everything about the situation I loved. I can tell you that with 100% fact. But the Phillies might not want be back if I blow out in the middle of this year I mean there’s a lot of things that can happen, so you just never know. I enjoyed my time there. I had as much fun playing baseball there as I ever have in my whole life. So that’s how strongly I feel about it. It was an unbelievable situation, it was a lot of fun, and I loved everything about it.”