He may just be the luckiest New York Yankees fan on the face of the Earth. Christian Lopez is living the dream that every New York Yankees fan envisioned when they walked into the House that Steinbrenner built on Saturday afternoon not realizing that he would forever would become a part of Yankees lore and history. As Jeter quickly got hit #2,999 in his first at-bat against David Price he wasted no time in the third inning giving the fans with what they had come to see. David Price launched his 3-2 curveball off the mark and Jeter picked up his 3,000th hit in style with a shot into the left-field bleachers in the seats right where Christian Lopez was sitting. It was the first home-run for Jeter at Yankee Stadium since last July and Lopez flung his camera in the air as he saw the ball coming his way. As Lopez’s father sitting next to him missed it, the ball came rolling right to him as he jumped on it and used his father as a shield over other people. Lopez, a St.Lawrence University student, did an honorable thing in passing up a six figure payday for this historic piece of baseball history. Especially considering this 23-year old from Highland Mills, N.Y., has a ton of student loans to pay off in an economy that is not so promising right now for young kids coming out of college. 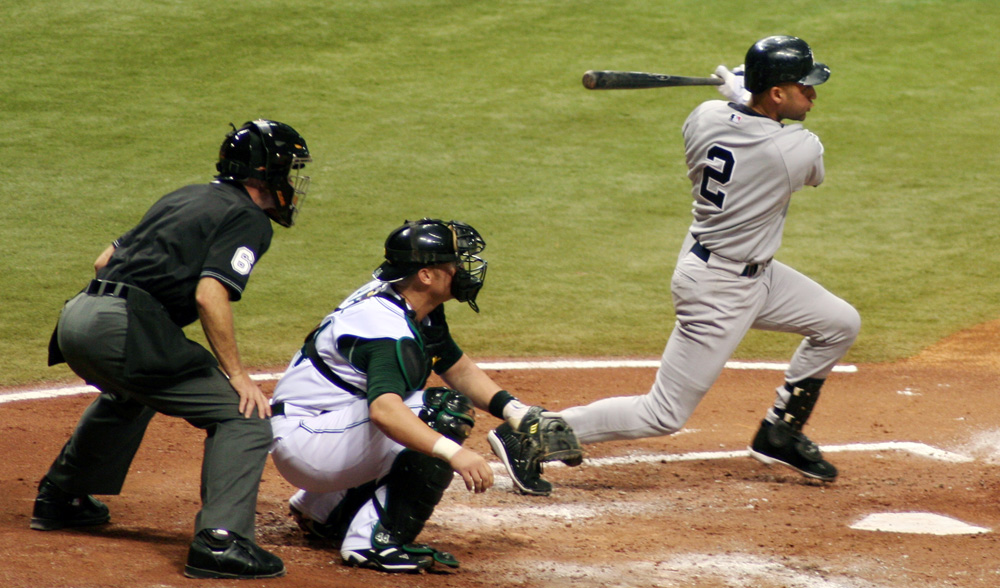 In this modern day you’d be hard pressed to find many people passing up a big payday especially after having the luck that this kid had drop on him. According to Lopez the thought never crossed his mind of keeping the ball because Derek Jeter is his idol and he deserved it. You don’t want to be cliche here, but in this case a memory of a lifetime for a big Yankees fan outweighed the thought of money buying him everything in the end. The Yankees rewarded Lopez pretty darn well for his decision by giving him signed balls and bats from Jeter and luxury box suites for the rest of the season including how far the Yankees make it in the post-season. Those seats aren’t cheap! Christian Lopez joined WFAN in New York with Ed Randall to discuss if he got any sleep on Saturday night after catching Derek Jeter’s 3,000th hit, thinking he would catch Derek Jeter’s 3,000th hit, his thought process as Derek Jeter stepped up to the plate looking for his 3,000th hit, the reaction he’s been getting from family and friends after catching Derek Jeter’s 3,000th hit, there ever being a thought to not give the ball back to Derek Jeter after he caught it and his girlfriend jokingly wanting him to keep the ball so he could sell it and pay off his student loans.

Did you sleep last night?

Is there even a fleeting thought that Derek Jeter would hit the ball to you?

“No when I finally got into the seats I was like ‘We are in home-run territory,’ and I’m hoping someone hits a home run in my direction. What’s greater than a home run ball? There’s no words to say what it is to say what happened.”

So what happened when Derek Jeter stepped up to the plate looking for his 3,000th hit? What did you do from your seat?

“I had my camera out, my cell phone out, taking pictures of it and every time a pitch was thrown I was snapping a picture of it. I put it on continuous shot and hit the picture and next thing I know I see the ball in the air when he finally made contact and I just dropped my phone. My dad luckily missed it and the ball just rolled right into me.”

What reaction have you been getting from family and friends about catching Derek Jeter’s 3,000th hit?

“All crazy stuff like I am a lucky SOB. I can’t believe it’s you! It couldn’t have happened to a better person. Why didn’t you sell the ball? You could have been a millionaire! So many different things people were saying, but from my really close family they called my dad right away when they saw me on TV. They saw my dad fly across the stands there. They saw me holding the ball and they were like ‘Holy Crap! That’s Christian! Where’s my phone? I gotta call his dad.’ We got some calls from my godfather and some of my dad’s oldest friends. I got calls from my girlfriend’s family. She’s getting calls from her family all over the country being like is that your boyfriend that caught that? It’s crazy. Two of my closest friends called me. I’m taking my best friend to the game today. We’re heading out in a half hour or so to try to catch some batting practice.”

Was there ever a thought to not give the ball back to Derek Jeter when you caught the 3,000th hit? What did security say to you?

“Well to be honest with you after I caught the ball like you said security was putting a push on me immediately. Next thing I know security is grabbing me and saying ‘I have the package. We have the package. Blah. Blah. Blah.’ Eight more security people came around, all around me and my dad. They were taking us around back rooms, elevators, hallways, the stuff fans would dream of seeing. All of a sudden they are like ‘Are you thirsty?’ Me and my dad are sweating like crazy because they are having us run through stuff trying to get away from reporters. Finally the head of security sat us down and they are like ‘So what do you want?’ I was like ‘Oh wow I didn’t really think about this.’ I was like ‘I guess I really just want to give the ball to [Derek] Jeter. I mean the guy deserves this.’ They were like ‘Oh.’ They were like really shocked. [Ed Randall: They must have been stunned?] As soon as the guy stepped out of the office for a couple of minutes he came back and said ‘This is what we are going to do for you. Do you want any balls or jerseys or anything?’ I was like ‘Yeah a couple of signed balls. Some jerseys and some bats maybe.’ He said ‘Okay we can definitely do that for you.’ Then he leaves again and comes back and is like ‘Well would you like season tickets for the rest of the year?’ “

Is it true your girlfriend jokingly wanted you to keep the ball so you could pay off student loans?

“Yeah I am a couple of hundred thousand dollars in debt thanks to St.Lawrence University. I mean it’s crazy. I guess there are Facebook groups for me trying to raise money for my student loans or something. It’s crazy. I woke up to Facebook this morning and I had 278 friend requests. These are people I don’t even know.”