They were always respectful enough to me where we had no problems between us”The majority of college basketball fans, except of course the Duke fans themselves, grew up watching successful Duke teams and started resenting them for one reason or another.  Whether it was because they always won, whether they dislike Coach K or whether they felt Duke always got the calls from officials, we all have our own reason for hating the blue and white When ESPN premiered their latest installment of their ’series with ‘The Fab Five’, we learned how the heated rivalry between Duke and Michigan started and why they hated Duke.  They thought Grant Hill and Christian Laettner, along with the rest of the Blue Devils, were soft, but they soon learned that wasn’t the case.  They were excellent hard-nosed basketball players, knew how to play as a team, and valued an education.  The Fab Five respected Duke as a whole, but they had a special distaste for the Blue Devils’ star big man 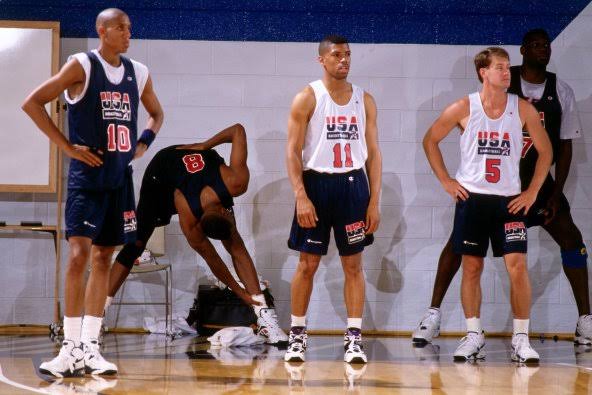 Christian Laettner joined XX Sports Radio in San Diego to talk about what he thought about the ‘Fab Five’ documentary and what was said about him, if he can grasp why the Fab Five hated him so much, and the notion that he must appreciate the hatred the Fab Five displayed towards him.

What he thought about the ‘Fab Five’ documentary and what was said about him:

“Well I did not see it.  I did not watch it because I was busy that night but I heard all about it and I saw Grant’s reply.  I thought Grant’s reply was just perfect.  I just joked with him and said, ‘Whoever wrote that for you did a real good job.’  You said, ‘Stick it where the sun don’t shine.’  He and I are always going back and forth.  We had a lot of fun goofing around.  He is amazing, he is still playing at the age he is, he is 38 now or something, on that Phoenix Suns team that is run, run, run all day long.  He is doing really well.  I am very proud of him.”

He can grasp why the Fab Five hated him so mIfuch:

I definitely understand and I can see where they are coming from and, you know, two things:

Duke recruits the crème de la crème of any color you are.  Anywhere in the world they are going to get a look at the best players because people want to play for Duke and for Coach K.  So that, it does not matter where you are from, they are going to come.  If they think you can do the basketball and the schoolwork, they are going to come get you, and then you just either say, yes or no, no big deal.Now, the second thing is, you know the Fab Five were young and I think if they got older and if they matured and stayed in college to their senior year, they would learn things like, if you disrespect your opponent and if you underestimate your opponent, you are just setting yourself up for failure, and Coach K did a great job of instilling that in us when we were at Duke and he never allowed us to disrespect our opponent, he never allowed us to underestimate them, and when you do it, it allows you to play your best because you are on point, you are very focused, you know you can’t goof around at all.  You have to play great because you respect the other team and you respect the other players.  I think they would have done that as they got older and I know they did it as they got older and I ran across them in the NBA, like I said before, Jalen Rose and Juwan Howard and Chris Webber, they were always respectful enough to me where we had no problems between us.  They were always cool with me and I did not play with any one of them on a team so we never got close but you could see as they got older the respect was there, so I appreciated that.”

On the notion that he must appreciate the hatred the Fab Five displayed towards him:

“I heard you guys talking a little before I came on and, you know, when you are trying to kill people and beat people every time you see them and when you are trying to get to the Final Four every year like I was trying to do, and we were able to pull it off, I hit a lucky shot against UConn when I was a sophomore, I hit a really lucky shot against Kentucky when I was a senior, so when you are having those high expectations and when you are playing your hardest every night you are trying to kill the other team, you don’t expect them to love you…  They have to eventually respect you.  Everyone has a chip on their shoulder, I mean everyone who is a great player has a chip on there when they step on the court.  So, yeah, you are not going to like each other.”

Whether he went into their first game against Michigan in ’92 thinking they have to show these young players how to play basketball:

“Well like I said, Coach K is an amazing coach and he got at us every second of the way and he would never let us think stuff like that.  He would make us think, these guys are good, they can beat you and will beat you if you are not on top of your game, so let’s practice and be ready to have a hell of a fight and hopefully we will end up on top.  Sure, did everyone know they were brash and, that may ]be the farthest we would go with it, you know, they are cocky, they are young, and they are brashdeal, let’s go out there and beat them.”