Chipper Jones Feels the Braves Can Win the NL East, but shares that “the biggest reason for coming back was my teammates.”

After Chipper Jones tore his ACL for the second time in his career last season, the thought around baseball was that this was it for one of the game’s greatest switch hitters ever.  Jones didn’t get the message. He wasn’t ready to put down his bat and hang up his glove, even though it meant a grueling rehab to prove the naysayers wrong. The campaign also meant the Atlanta Braves mainstay would be playing for a different manager this time around with Bobby Cox retiring. The Fredi Gonzalez era in Atlanta had a rough start in the early going, but the Braves have been playing better baseball over the last two weeks having won seven of their last ten games, including two of three this past weekend over their primary competition in the NL East, the Philadelphia Phillies. 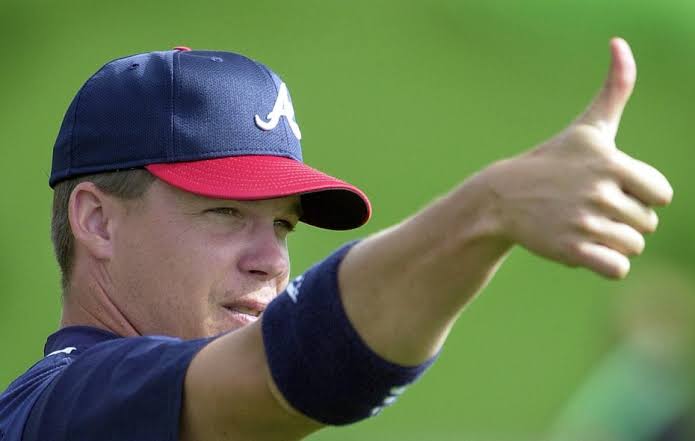 As Jim Rome noted in the following interview with Jones, the Braves pitching staff actually has the best ERA in baseball so far this year, not the Phillies staff that’s been receiving endless accolades due to the impressive star power of the rotation. One thing is for certain: Regardless of who you root for in the game of baseball you need to tip your hat to Chipper Jones. The eighteen year veteran is a consummate professional, representing Atlanta with nothing, but hard work and class.Chipper Jones joined The Jim Rome Show to discuss his physical health after suffering a devastating ACL injury last season, wanting to comeback to the Braves this year despite the grueling rehab involved with an ACL injury, the thought of retiring during the rehab process this off-season, whether he believes the Braves can go toe-to-toe with the Phillies, what he believes is the real reason for why pitchers are dominating baseball and the pursuit of 3,000 hits before he retires.

You’re coming off that devastating ACL tear last August. How is the knee right now?

“Ironically the other knee gives me more problems than the left knee at this point, but it’s coming back great. I really needed to use the motivation of spring training to get myself ready and back out on the field. I worked really hard this off-season to make sure I was going to prove all the naysayers wrong and be the opening day third basemen for the Braves. I hit the ground running. As you said we got off to a little bit of a tough start, but we have been playing a lot better over the last two-and-half/three weeks.”

“Well it’s not the only reason [to come back and prove the naysayers wrong]. If somebody says you can’t do something you want to prove them wrong, but the biggest reason for coming back was my teammates. They all expressed to me that they wanted me to come back. This is a team I feel over the last two or three years is on the rise again up in the National League East after four or five years of not being in the playoffs. We made it last year limping in without myself, without Martin Prado, without Billy Wagner for the last couple of games of the Giants series. This is a team we are all really excited about here in Atlanta. You don’t have a heartbeat if you don’t want to be a part of something that you might think is something special. I certainly feel with some of the improvements we made over the off-season [the Braves have improved]. We lost three one-run games to the eventual World Series champion with a depleted roster. You would like to think that you are going to better yourself in the off-season and give yourself another chance in the postseason.

Were there days in the off-season during rehab where you said this injury is not worth coming back for?

“Yeah about after your fifth day in a row of going to rehab for an hour and half/two hours a day it’s…having to go through the pain that you have to go through in order to get the thing ready. Yeah there were times during spring training where I would come to the ballpark or wake up in the morning and get out of bed and think there is no way that I can bend over to take a ground ball or run down to first or hit a ball with some kind of authority into the gap because there is no way. I doubted whether I’d be able to do it over a consistent basis many times, but I think by just dragging my old butt out there every day…the bad days got fewer and farther between and now I’m to the point where I could go out and play every day.”

Do you think you can go toe-to-toe with Philadelphia’s starting pitching staff all year long? Are you guys that good?

“Head-to-head with Philly, toe-to-toe, I think definitely. A lot of it is how they pitch our hitters. How we pitch their hitters. Their offense has been struggling. Right now I think we can stand with them toe-to-toe. Now can we play as consistently against the rest of the league and the rest of the division as Philly can? That remains to be seen because that is something they have excelled in over the last four years and we have not. Take for instance their record against the Washington Nationals and our record against the Washington Nationals over the last four or five years. They are thirty games better than we are over the Washington Nationals. That’s a huge difference right there. Last night was a perfect illustration. We come off winning two out of three in Philly and come back after a day off to play the Nationals. We make three or four errors and don’t play a solid game. We ended up getting beat. That doesn’t happen to Philadelphia. They bring it everyday. We have to get to the point where we get these young guys to bring it every day.”

Talk about your thinking as to why pitchers are dominating hitters in baseball with all the no-hitters occuring in the last two seasons? You believe it is the cut fastball?

“The cut fastball is the bane of my existence as it is most left handed hitters. I think you’ve seen the re-invention of the cut fastball. It’s the pitch Mariano Rivera has made famous. Guys can really…if they have a good cutter can really go out and pretty much neutralize left handed hitters. It comes in looking like a fastball, but it’s got four or five inches of cut on it. Most people see a cutter inside and they try to pull it. The cutter is a pitch you absolutely cannot pull. Cutter is a pitch that you’ve gotta stay inside of. You saw how Mark Grace and Luis Gonzalez did it to Mariano Rivera in the World Series back in the day. That’s how you have to hit that pitch. Most people are not disciplined enough to be able to do that. You’re seeing not only that, but you are seeing an influx of guys…we were talking about it the other day. Whatever happened to the guy coming out of the bullpen throwing the 88-89 miles per hour sinker and slider? Those guys are done. Those guys are obsolete. There is no place in the game for the nowadays. Every guy that you see coming out of bullpens nowadays is throwing 95-96 mph with hammers and splits and cutters and it’s just made it a lot more difficult on the hitters the last couple of years.”

“I would doubt it at this particular point. Three thousand is not really a number I’ve shot for from the time I started playing. I think if I had to do it over again early in my career I might have been a little more aggressive and not drawn as many walks. I’ve drawn 1400/1500 walks. If I was just a little more aggressive maybe I would have had 300 or more hits to pile on, but it’s not really something I can control. My philosophy in hitting is trying to be as tough of an out every time I walk up there and that entails talking a walk and letting the guy hitting behind me beat the other club then that’s what I have to do. That’s one of the reasons why I’ve maintained a .300 average over that time, being the two most important numbers for me are the .300 average and the .400 on base percentage because that tells me over the last eighteen years I’ve been a really, really tough out and produced a lot of hits, a lot of walks, a lot of RBI’s and a lot of runs scored because of my approach at the plate.”