Just when you thought you’d seen it all — the blue turf at Boise State, the red now at Eastern Washington — something else comes along to win the battle. In this case, you can consider Central Arkansas as the new front-runner in the race for the most annoying turf in college football. The folks at Central Arkansas, which plays at the Football Championship Subdivision level, were already renovating their stadium, and since they were putting in synthetic turf, they figured they might as well look into whether they could make a publicity stunt out of it. Well, chalk that up as a victory.Central Arkansas is working to debut a turf that is purple and gray, alternating every five yards between colors. I wish I was making that last sentence up. Central Arkansas athletic director Brad Teague joined 790 The Zone in Atlanta with Barnhart and Durham to discuss how the school decided to switch to the new colored turf, what went into the process, what the other options were and how the decision has gained the school notoriety. 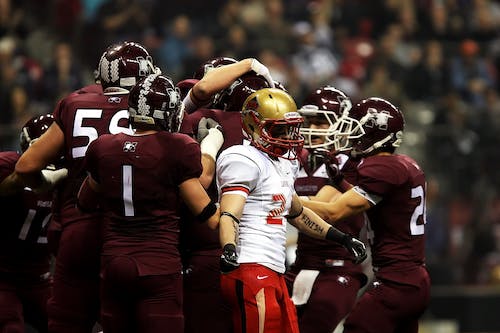 How did they come up with the idea to have purple and gray field turf?:

“Everybody knows Boise State, they’ve had their blue turf for over a decade. Eastern Washington followed suit more recently with a full red turf. Just recently, we decided we were going to spend the money and change to a synthetic turf. In doing so, we said, ‘This is a good opportunity to be different. Do we want to do it?’ The decision was, yes, let’s be unique, let’s garner some recognition for an FCS school that we wouldn’t get otherwise.”

“This was not a decision we just made on a whim. … We had a big feedback session and brought in donors of all types, brought in corporate sponsors, brought in our football coaches, student athletes, student body, faculty and staff. We actually voted on five different options and this was the option that won out significantly over all others.”

What were the others?:

“We had the green field and then we had four different purple and gray options. One was an all purple field. We had alternating every 10 yards instead of five yards, which was the winning decision. And then we had what we called the purple zones. Instead of the red zone, 20-yard lines in, we had purple 20-yard lines in. … We went with the winning entry, which was every five yards, and it really looks sharp and looks good. Certainly, it’s going to be different. Playing on the field and practicing on the field is going to be a change.”

On how the decision has gained Central Arkansas more notoriety:

“We have not received near the attention for those two items [honoring former player Scottie Pippen and having Arkansas great Corliss Williamson as basketball coach] as we have for this turf. In 48 hours, we had 200,000 views on our YouTube video. The most views we’ve ever had for any event was less than 2,000. … It’s just been a lot of fun attention. We’ve had 15,000 new visitors who have never visited our website before. … Of course, there are certainly people who don’t like the fact that we’ve gone purple and gray. … But I think, at the end of the day, when they see that we’re getting this attention and our televised games will also probably get us some recognition on major networks throughout the season, I think they’ll understand … it was a good decision.”