Have you ever wanted to hit a teammate for talking trash and being an idiot? Scuffles within a team happen all the time, but this one is pretty entertaining. Byron Scott and Mychal Thompson used to be teammate’s back in the day when they both played for the Lakers. Thompson repeatedly talked smack to Scott about his love for boxing and how he could put a whooping on him. So after hearing this for quite some time, Kareem Abdul-Jabbar brought in two pairs of boxing gloves and decided they should settle it right then and there. They eventually fought another day and Scott roughed him up pretty good. To this day, Thompson believes that he was the outright winner but Scott begs to differ. Byron Scott joined ESPN Los Angeles with Mychal Thompson and Andrew Siciliano to set the record straight about his scuffle with Mychal Thompson and his interest in the Clippers head coaching job. 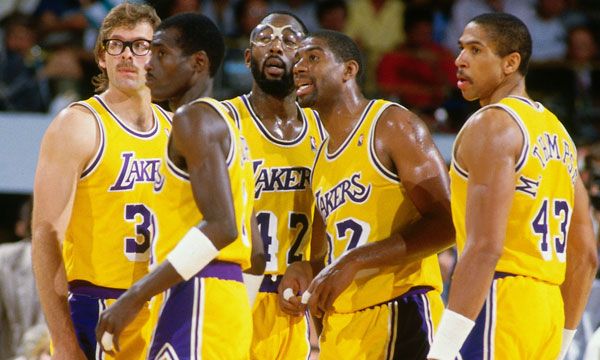 The story about when he and Mychal Thompson got into a boxing match:

“I am sorry.  I am sorry man.  I don’t mean to tell people how I beat you up.  I know that it is an advantage when you are 6′ 10″ and about 250 and you lose to somebody that is about 6’4’’ about 210-215.  It wasn’t a fair fight to be honest with you because I am just a much better boxer.  Much polished and much more polished than Mychal.  He thought the size was going to affect me and it didn’t.  So I just slapped him around a few times to let him know that I had the boxing skills to beat him and after he saw that he kind of left me alone about boxing after that.  Until this day he is going to keep denying it but we all know, in the Laker organization and in that locker room, that MT got beat up that day by Baby B, me”

Whether he is making this up because James Worthy was the referee and on his side:

“Even with the referee it wasn’t a split decision.  It was unanimous that he got beat and MT knows.  I understand that when you get beat like that you feel a little embarrassed because of that size you have…  Your favorite line, your most famous line was, you can’t hurt me.  It doesn’t matter how you hit me.  You are quick but you can’t hurt me.  Once I get with one punch, you are done.  Well you never got a punch in and obviously a little busted.  You got that nosebleed…  You got the rough end to that part.”

Whether his hand print was on Mychal’s cheek:

“Yeah, my right hand print was on Mychal Thompson’s left cheek and it’s OK.  It’s been years.  We are still boys.  You are always going to be my man but you know, hey you got your butt kicked that night.”
Whether Gary Vitti rushed to Mychal’s side right after the match not knowing what just took place:
“Well, no Gary Vitti was just standing there and telling Mychal don’t do it.  Don’t do it.  I have seen Byron fight.  Don’t do it Mychal.  Once we got done Gary kind of stood there looking at him like, I told you.  That was basically it.  They did ask him if he needed medical attention, but Mychal was a little too proud to take it.  You know stuff happens?  You get beat up.  You move onto the next day, the next year, the next decade and you just go on about your business.”

Mychal then says that he didn’t get a fair fight because he is in a foreign country:

“They would have voted me unanimously. You have got to at least hit me. You didn’t hit me. You at least got to get a finger on me. I mean you swung and I just ducked him and I was talking, is that all you got? Then I hit him with another good shot. Even in the Bahamas, in his country, they would have said, you know what we can’t take this away from him. He is the clear-cut winner.”

Mychal then states that he is was the aggressor:

“The aggressor has to hit the person first and the aggressor was missing and getting hit. That is a different story.”
Whether the boxing match was setup up by Kareem Abdul-Jabbar bringing in boxing gloves:
“Yeah me and MT had been talking about having a boxing match for a while and Kareem throws these gloves in the middle of the floor and said, come on! Get it on right now. I think MT had something to do that day and said he can’t do it today so Kareem picked the gloves up and about a week later we went ahead and settled it just barehanded like they did back in the old days, you know bare hands, open fists and we will see what happens. Like I said, you know the kid from Inglewood didn’t get touched. The kid from the Bahamas was pretty roughed up.”

Whether he wants the Clippers job:

“Man I will tell you what… You have seen me there every day. I am at the gym and having a great time. It is the first time since I have been playing or coaching that I have had this type of time where I can enjoy my family, my wife she goes to the gym everyday as well, and kind of just relax. To be honest with you for the past two months I really haven’t been thinking about coaching or anything like that until the last couple of weeks. You get that itch, especially when it gets close to playoff time. I am just going to kind of sit back until April or May and survey what is going on out there because there is obviously three jobs available right now. One I already had obviously in New Orleans and you have got Jersey and you have got the Clippers… There is going to be three or four more when the season is over that is going to be available as well. So I am just going to kind of sit back and take a look at the teams, do a couple of interviews and just kind of pick the team that is the best fit for me. I do think the Clipper job is a pretty good job for me. They have got some young talent. Obviously they are going to have a lot of cap room and another lottery pick coming in. So I think it is a pretty good job. I am just going to sit around and just kind of evaluate everything that is going on and try to make a decision I think that will be best for my family.”