Brittney Griner Plans to Bring Plenty of Dunks to the WNBA

In the least shocking sports move of recent memory, the Phoenix Mercury made Brittney Griner the No. 1 overall pick in the WNBA Draft. She may be a player who will change the WNBA forever, but she’s been in the news most recently because of some comments from Dallas Mavericks owner Mark Cuban. Griner says her heart lies in the WNBA.Brittney Griner joined XTRA Sports 910 in Phoenix with Bickley and MJ to discuss being emotional on WNBA Draft night, the challenge of lifting the WNBA up to a new level, the talent of the Phoenix Mercury, bringing more dunks to the WNBA, the high expectations and what she’ll do if an NBA team comes calling. 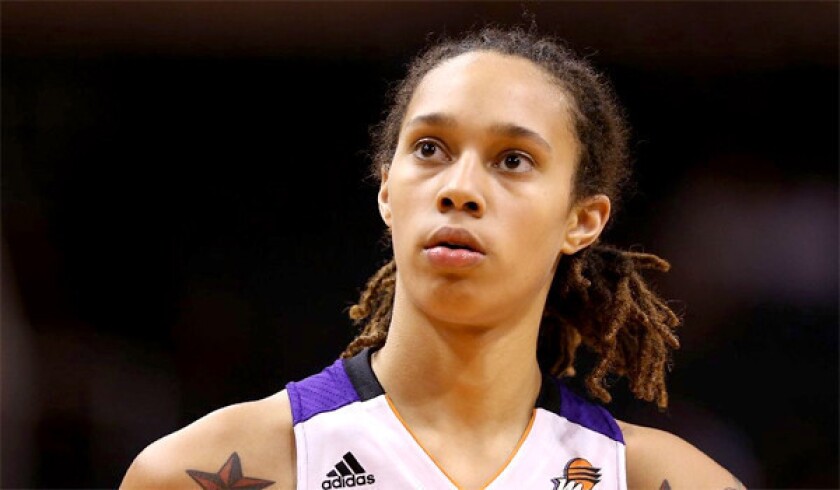 Why were you so emotional on WNBA Draft night?:

“I’ve been waiting on this day for a while, and when it finally came I kind of just froze in time and couldn’t say anything and got choked up a little bit. All throughout the day, it was just an emotional day. I think I cried three times. … It was just that big moment, and it was just everything I thought it would be and more.”

Are you up for the challenge of lifting the WNBA to another level?:

“Oh yeah, I’m definitely up for that challenge. I hope I live up to it. I’m going to do everything in my ability to, I know that’s for sure.”

Do you think this Phoenix Mercury team is almost a Dream Team and can win some championships?:

“Definitely. I think this definitely can be a powerhouse team. … Everybody on this team definitely are great players. I’m coming into a unique situation where I can just come in and be a sponge and absorb everything and learn from the greats, and just add a little part of my game, too.”

On bringing more dunks to the WNBA:

“Dunking is definitely coming to Phoenix, and I just can’t wait. I’m going to try to dunk it as much as I can.”

Are you worried about expectations maybe being too high?:

“No, not really, not at all. Whatever me and Corey sit down and talk about, and the expectations he gives me and other things, that’s what I’m going to try to live up to. Everybody else’s expectations I’m just going to put to the side.”

How do you see them marketing you to draw fans in and maximize what you mean to the team?:

“I have no doubt in my mind that they’re going to do everything to put more people in those stands. But like you say, the Phoenix Mercury, they have a great fan base.”

If an NBA team does want you or wants the publicity of bringing you to the summer league, what will you do?:

“First talk it over with the Mercury. First things first, I want to be there with my new team and take care of all that first. The WNBA, that’s where my heart lies, so they’re not going to steal me away from the WNBA at all. Everybody thinks I’m going to leave the Mercury or leave the WNBA, and I’m not.”