Brian Urlacher on His Future in Chicago: “I Want to Play for the Bears. That’s my First Choice.”

Brian Urlacher would like to stay in his home of Chicago. The veteran linebacker is hopeful to be back with the Bears, but hasn’t heard from the team regarding his future.Urlacher will become a free agent after the Super Bowl.Brian Urlacher joined ESPN Chicago with Waddle & Silvy to discuss the progress of his rehab, his playing status for 2013, his knee being stronger next year, playing at a high level next year, not speaking with Bears GM Phil Emery, not speaking with head coach Marc Trestman, not being surprised that Trestman was hired as head coach and playing for Lovie Smith if he couldn’t play for the Bears. 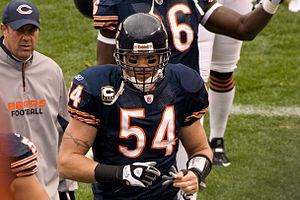 How is the rehab going and did you make up your mind for sure that you are playing in 2013?

“I’d like to play; I feel good. My rehab is over with my hamstring. I actually practiced the last week of the regular season before that Detroit week. I practiced that week. The game … we had to win it, but we took care of business. I wasn’t ready for the playoffs if we made it, so rehab is done now. Just working out trying to get ready. I have been off for so long, missing the last four games. I was off a while there and I wanted to get back into it a little bit earlier than I normally do.”

Do you feel like the knee will be strong next season?

“One thing was, I never really got to do any rehab in the offseason because the knee was … too painful to do anything the whole offseason. When it finally got better in June and July, I started running and doing the things I could do to keep it stronger. In training camp the knee scope set me back a little bit and I never really recovered from that. For sure I felt like I got better during the season. I started out pretty rusted, but I felt like I got better as the season went on. I feel like I have a whole offseason to strengthen my quad and my knee, which will make me stronger. My knee feels great. I haven’t done anything, so of course it feels great. I’m not running on it, so it feels good.”

Do you have any doubts that you will come back next year and play at a high level?

“At times I felt like I was playing pretty well. I was just so inconsistent. I was never really in football shape. It was very frustrating for me to be out there and just not be able to do what I normally do. I think I can get back there, though … just through training in the offseason and get back into it, and practicing. Gosh, I missed so much practice last year. It was frustrating.”

Have you had any contact with Bears GM Phil Emery?

“No. They have been so busy with things like the Senior Bowl and hiring a new head coach and what was going on with that. I talked with our trainers. They are all still there. I talked to them every once in awhile.”

Have you talked with Marc Trestman at all?

Were you surprised Marc Trestman got the job?

“I knew he was in the running for it, and I know he’s got a pretty good resume … offensively, which is the direction the Bears want to go in, obviously. So I wasn’t surprised. … You look at what he’s done, where he’s been, the numbers he’s got, he was a good choice.”

If Lovie Smith was hired as a defensive coordinator for another team would that make your decision harder?

“No, I don’t think so. I want to be a Bear. That’s the only reason. I want to play for the Bears. That’s my first choice. Beyond that, if it didn’t work out there, then yes I would have definitely would have wanted to play with Lovie Smith wherever he was. If I had five chances to be a Bear I would, but if not, if he would have went somewhere than I would have definitely liked to have played for him because I know the system pretty well, but I’ve learned a few systems in my career as well. I can also do that.”