Brandon Roy: Andre Miller Brings The Leadership I NeedI know the money is just stupid, but in sports terms, Brandon Roy deserved every dollar of thatmillion extension.  He is a franchise player, he lives for those fourth quarter moments, and he will always be his team’s number one option.  This three year trial run since he came in to the league has made it clear to Blazers’ brass that he will work to get better at all times.Kevin Pritchard ended up with the best player in that ‘06 draft – maybe the best two when all is said and done considering LaMarcus Aldridge’s progress – and there was no choice but to pay him as such.  It’s nice to see an extremely hard-working man improve so much at his trade and be rewarded for it.  When he came out of the University of Washington, no one expected him to be close to this good; Brandon decided to work and its paid off, literally.  Roy joined 95.5 The Game in Portland to discuss the contract negotiations from his point of view, what he’s working on this summer, and why Andre Miller will make a difference on the Blazers. 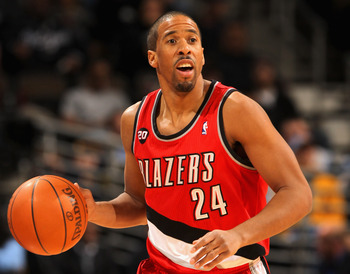 On How The Negotiations Went For Him:

I told my agent and said, ‘Hey, look, just call me when you feel like we’re close again.’  So, that way, I wasn’t just spending every day worrying about the contract, thinking about the contract.  I just wanted to get away and say, ‘Hey, look, I’m gonna enjoy my family and call me when both sides are moving closer towards an agreement.’  I think towards the end of the month, both sides got re-engaged in it again, and he started to begin to call me again and said, ‘Look, we’re getting closer, and you can start to relax a little bit.’  So, that’s kinda how my process went.”

On Whether Or Not The Money Will Change Him:

“I’m gonna keep being Brandon Roy.  I think I’m gonna improve, I know a lot of things I’m gonna work on this offseason and continue to make my mid-range game much better so I don’t have to take as many bumps when I get to the basket.  My thing is to never play for money or to try to go out there and not get injured, I just try to play as hard as I can to win every game.  I just think the longer I’ve been in this league, I’ve learned how to take care of my body a little bit more.  I know something I’m gonna do this year is hire a personal chef to make sure I’m eating properly throughout the season, and then maybe even to get involved with some yoga or some pilates, just to continue to give myself some kind of edge to go out there and continue to improve.”

On What Andre Miller Brings To The Blazers:

“I think the biggest thing he’ll bring is leadership to our team.  Me, and LaMarcus, and coach Nate of course have tried to do that; even coach Nate would say that you need a player out there to do it.  I would go to coach Nate a number of times this season and say, ‘You know, coach, there’s times during the game I wish there was an older, veteran guy around to help maybe show me the way.’  I think that Andre Miller, he’s the perfect guy for that.  And, not only help me out, I think Greg and LaMarcus will benefit extremely from having a pass first point guard, and a point guard that has an aura about himself.  He’s a crafty guy, he’s been in this league for a number of years, and he’s excited about being here, and he’s excited about making us better.  So, that makes me think that, ‘Eh, this guy’s gonna help make this team even better than a 54-win team.”