Bobby Bowden: Florida State is On Track to Return to Days of Old, Should Stay in ACC to Do It

Bobby Bowden won two national championships and 12 ACC championships when he was the coach at Florida State. The Hall of Famer was essentially forced into retirement following the season, handing the reins over to Jimbo Fisher as the Seminoles looked to the future.As the opening weekend of college football continues, the Seminoles are among the teams that many believe have a shot at winning the national championship. They opened the season ranked No. 7 in the nation and Bowden believes the program is on track to return to the glory days, but believes Florida State should remain in the ACC if it wants to get there.Bobby Bowden joined WQAM in Miami with Big Dog to discuss his advice for Jimbo Fisher regarding a team with high expectations, fighting complacency, if the ACC needs a dominant team once again, if Florida State should stay or leave the ACC in order to get there and what it’s like for him to watch college football now. 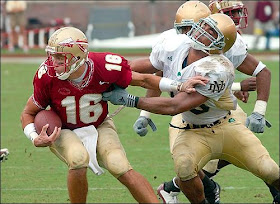 What advice would you have for Florida State coach Jimbo Fisher as he enters the season with a team with high expectations?:

“The approach I tried to take with my boys was enjoy the moment. In other words, I’d rather for them to pick us high than pick us low. Now, some coaches would rather have the other way, they’d rather be the underdog. It’s just great to be in that position and you might as well enjoy it and encourage your boys, we’ve got to live up to it. And I think Jimbo’s taken that approach.”

Did you ever worry about kids getting too big a head?:

“That is big. When we were having so much of our success in the 90s, where we put those good years together back to back. You know what our biggest enemy was? Complacency. I had to continue to keep my kids’ heads above water. First thing you know, they start believing how good they are and think they don’t have to put out or work. So complacency is a big killer when you’re having success.”

Do you think the ACC needs a dominant team again?:

“Oh I would definitely agree with that. The biggest thing that’s happened in the ACC, when they added Miami and Florida State, you were adding two teams that had seven national championships the last 20 years. But we both have kind of fallen from grace during that time. … Now, I think Florida State is recruiting at that rate again. And I think Miami will, too, once they get their little problem straightened out down there. But that’s the biggest thing missing from the ACC that the ACC had planned on, was somebody needs to get back into that national championship mode.”

Would you like to see Florida State stay in the ACC or move conferences if they get the chance?:

“I think their best chance is to stay where they are. You get into the SEC, you’re going to have a great team and end up third. Arkansas was outstanding last year and they were third in the conference, third in the nation even. And second and third don’t count. I really think Florida State’s best chance of getting back to the top, nationally, is through the ACC channel.”

Do you get exciting watching football now or did you get burned out watching game film?:

Do you have certain teams that have become your favorite outside of Florida State?:

“I’m a big Alabama fan. I went to Alabama when I got out of high school and didn’t stay. I transferred to another college. But it’s Florida State and Alabama in that order, then I pull for the Florida schools. I like to see the Florida schools do good. … I don’t root for [Florida], at least I can’t admit it.”