With a roster full of rookies and young players that many people have never heard of, the Oakland Athletics are somehow managing to be one of the hottest teams in all of baseball. Thanks to a ten game stretch where they won nine of ten, including four straight, Oakland is three games over .500 and right in the thick of things when it comes to the second wild card spot. Now that Yoenis Cespedes has returned to the lineup after a myriad of injuries, the team’s offense has gotten a much needed boost. Relying on young players is often risky in a playoff race, but Oakland has no choice and up until this point, the youngsters have answered the call and the A’s are one of the best stories in baseball to this point.Bob Melvin joined 95.7 the Game in San Francisco with the Rise Guys to talk about all the home runs the team has been hitting lately, whether Yoenis Cespedes will continue to be a designated hitter,  all the young players giving the team hope for the future,  the challenges of the upcoming schedule and whether he was concerned how his team would come out of the All-Star break. 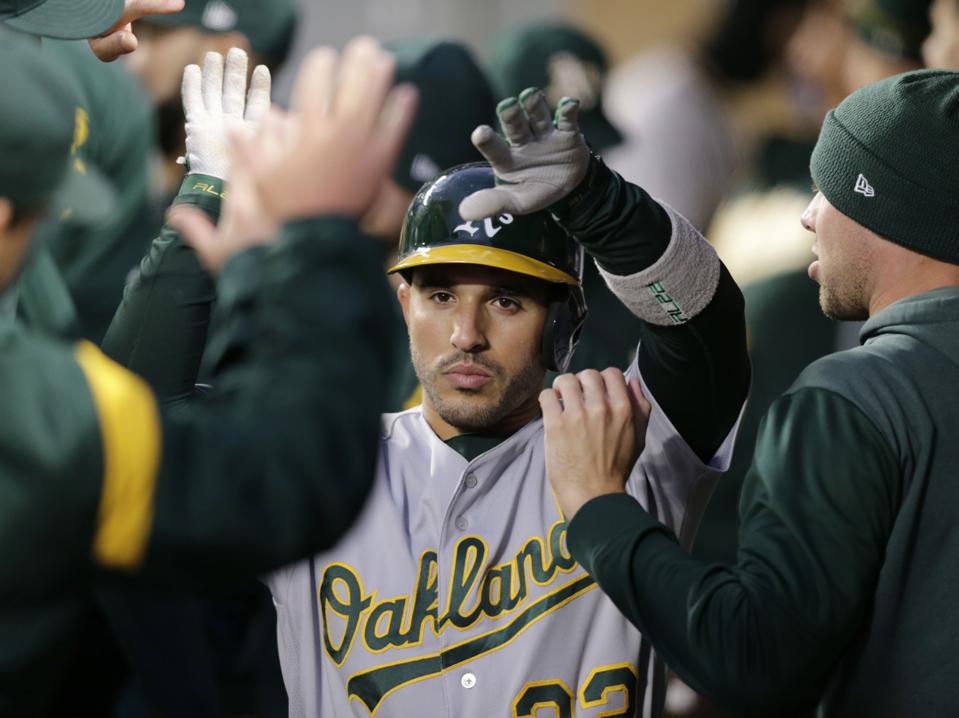 On all the home runs the team has been hitting lately:

“It can. It has a little more of an effect than a two run single and when you’re hitting them in bunches and a couple in an inning, it really kind of gives you that superiority type thing for the time being. It’s something that we really haven’t been able to do until recently. We’ve had our share of home runs but not multiple home runs and not multiple guys in the middle of the lineup at this point in time that are looking forward to doing something like that so it just has a different effect when you’re hitting balls out of the ballpark. The Yankees have done it for years and it’s just kind of an overpowering feeling and when you’re on the other side is not a great feeling. It was nice to see this weekend.”

Whether Yoenis Cespedes will continue to be a DH:

“I’m not sure. He’s just having trouble getting the glove on and it’s a lot more uncomfortable on the defensive end certainly than it is on the offensive end. He’s not having any problems there right now. He had a great series for us and was really kind of the igniter each and every day and guys kind of rallied around him. He certainly makes a big difference for us when he’s in the lineup and if it has to be in the DH role right now we can live with that.

On all the young players giving the team hope for the future:

“It’s really been great to see our young starters do what they’re doing and like you said each night in Minnesota the winner goes to a young pitcher. I don’t think (A.J) Griffin had his best stuff and he still comes up with the win so it’s really exciting to see where the future can go with these guys leading the way. There are potentially more coming. These are guys that we are relying on very much at young ages and they’re stepping up and then they’re coming through for us.”

Whether he has looked forward at the difficult schedule coming up:

“I know we’re playing Texas tomorrow. I try not to look too far into it. I know what the schedule looks like but where our focus needs to be is on tomorrow’s game and if you look at the tough part of the schedule and say ‘hey how are we going to get through this’ I think it just adds negative thoughts that you don’t need to have so we’ve been trying to take it one day at a time, look at that particular series, try to do well and then move on from that instead of saying ‘hey look at the teams we’re playing here the next two weeks.”

Whether he was concerned about how the team would come out following the All-Star break:

“I was a little curious to see how we’d come back. We put so much energy and there was so much drama in all the games leading up to the All-Star break that the last thing you want is to settle in and be content with where we were and then come back and not have the intention to take it to the next level. The All-Star break for me didn’t come at the right time but we certainly followed it up and had a good first game. I think once we got a couple of runs in the first game, we didn’t get off to a great start, we had three guys in a row in the first inning strike out, I think eight of the first nine guys struck out and it looked like we hadn’t played in a month, and then all of the sudden we win that game and the confidence kept growing and growing. To be able to win three after the break you’re really fortunate to be able to carry over that good feeling.”