Austin Rivers Has Ice Water Running Through His Veins

On Wednesday night, another chapter in the Duke-North Carolina story was written. For Blue Devils fans, this chapter had a happy ending thanks to freshman Austin Rivers. Rivers turned in one of the most memorable individual performances ever in the Duke-North Carolina rivalry. He scored 29 points, the most scored by any freshman against UNC, and the final three came off his fingertips in the closing seconds. The game-winning shot he hit over Tyler Zeller will give Tar Heels fans nightmares and cemented Rivers’ place in arguably the greatest rivalry in sports. He went into Chapel Hill on Wednesday night as the son of Doc Rivers, a promising freshman who at times was the goat this season, but he left as a hero in the storied rivalry between Duke and North Carolina. 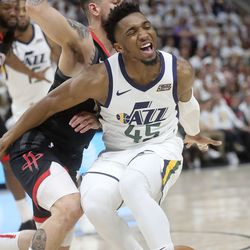 Austin Rivers joined ESPN Radio with Scott Van Pelt and Ryen Russillo to talk about the feeling of hitting the game-winning shot over North Carolina, on the idea that his shot was one of the greatest in the history of the two teams, what the play was designed to do, on the expectations placed on him, and what it’s like to have a father coaching in the NBA.

How it feels to hit the game-winning shot over North Carolina:

“It was just an amazing feeling. It was a big team win. I think everybody contributed to the win and just to get the win at North Carolina, versus a great team, meant a lot. Everybody stepped up and when that ball went through the net I couldn’t even tell you what I was thinking man. Everything went so fast.”

On the idea that his shot was one of the greatest in the history of the rivalry between Duke and North Carolina:

“I don’t even know what to think just because I’m just a freshman so in your first year in college to do something like that is amazing. It was a good moment for our team but we’re really focused for Saturday and that’s what we’re looking forward to now.”

What the play was designed to do:

“It was kind of like a dual option where the play started. Dre (Andre Dawkins) kind of just ran off a screen and I could kind of choose what I saw and just read the play. I saw a pick and roll option and I went off it. Once I saw Zeller on me I think the guys were telling me to go for the two. If you look at the play you see Seth (Curry) like ‘go, go, go,’ but Zeller was kind of backing off me a bit and I just kept stepping toward him a little bit and he kept backing off and kept backing off and then I just kind of got in rhythm and I just shot the shot. It felt good when it left my hands but your heart drops because you just don’t know. Then when it goes through the net it felt amazing.”

“You can’t ever worry about people’s expectations because if you do that you’re just going to drive yourself crazy because you can never please everybody. You just have to worry about your own expectations and most importantly your team’s expectations. If you can fulfill those then that should make you happy. I’ve just come in here and worked really hard. Coach K and them never give up on anyone here and they challenge me every day to get better and be a leader. That’s one thing I’m trying to do right now and I think I’ve gotten a lot better here at Duke and the team has gotten a lot better. Every day you have to fight. That’s the way here at Duke. Every single day you have to fight here in practice. Every game you play people want to beat Duke so you have to fight. I think that makes you into a better player and why so many players come out of here successful. That’s one thing I’m learning to do now and one thing I have learned to do and we have to continue that habit.”

What it is like to have a father coaching in the NBA:

“I think it’s unique because my dad, he knows what he’s talking about as far as basketball goes and he’s always there for me. He always helps me out with things and he’s been there for me. It’s not all basketball with him. People like to think on the outside I bet you know Austin and his dad talk about basketball but at the end of the day he’s a normal guy to me. He’s a father. He has always been for me.It’s unique to have someone who is a father but at the same time someone who can really help you in the game you love the most and I think that’s the most unique aspect of it.”