One of the greatest running backs of all time “graduated” from the NFL on Monday, as LaDainian Tomlinson retired in the same classy and graceful fashion in which he conducted himself throughout his 11-year NFL career.And naturally, lots of Tomlinson’s former teammates have praised him as a man and a football player. One of those guys is Antonio Gates.Chargers tight end Antonio Gates joined Josh and Charod on XX Sports Radio in San Diego to reflect on LaDainian Tomlinson’s career, their relationship, and L.T.’s decision to return to San Diego to make it official. 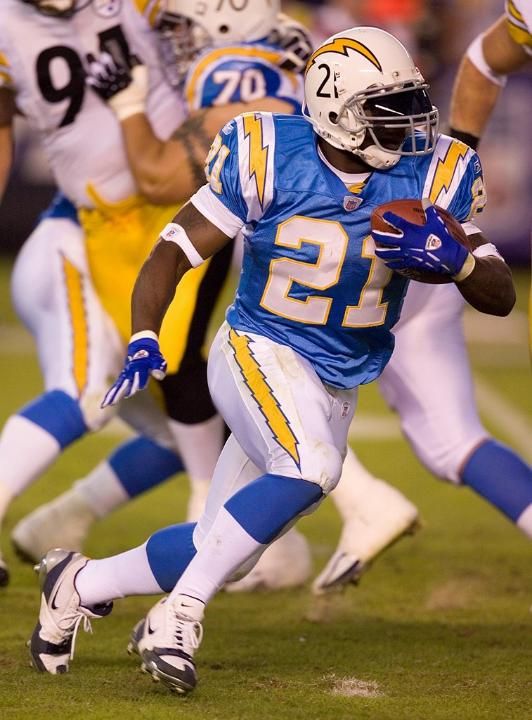 On LaDainian Tomlinson as a man and a teammate:

“To me, I listen to what the fans say, I listen how they see him make these amazing runs and these amazing catches, but what they don’t see is the constant professional that he is and the leadership that he brought to this locker room. I remember arriving here in ’03-’04, the standard was set. Once you watched LaDainian, you knew what it was like to be a professional athlete and a superstar in this league. He’s not only a guy that you can depend on in between the lines, and going out playing on Sunday, but he’s a guy you can definitely depend on outside of a football game, doing the right things, saying the right things and not having to worry about him getting in trouble. So when you think of that and you put all those things together, you have a guy of a standard and a stature that is definitely to me unmatched in this league. A lot of these guys should definitely take heed of what LaDainian Tomlinson is about and what he stands for.”

On learning from Tomlinson on the field:

“The catching for me was natural, but the running after the catch was not — that’s something that I had to work at and learn. And watching him gave me an idea of how to run the ball and how to be patient running.”

On Tomlinson returning to the Chargers on a one-day contract in order to retire with the team:

“To me that was the most impressive moment of the whole ceremony, is the fact that he was able to come back and embrace that he was a Charger for life and the Chargers embracing him. … I just felt that some things that was misunderstood from the media standpoint, from the New York media standpoint, was taken out of context. And I think him coming back as a Charger and saying some of the things that he had to say and embracing this city, because the city definitely loves him, I love him, the team, guys that played with him love him, so it was just special. And it was special for me to be here to show that no matter what happens, no matter what the situation is, it’s nothing but love. We played together longer than anybody — outside of, I think, Quentin Jammer — that’s still here, so we’ve been through the thick and thin and if people don’t understand, once you go through this and you’ve been a part of this battle and this commitment… You’re dealing with adversity here in San Diego. It was times when people weren’t even in the stands — I remember those days. So when you go through all that, you look at it in a bigger picture and say, ‘Wow, this is my brother, this is my family member. Because this is memories that last a lifetime.”