After staying quiet all week regarding his miscues, Marion Barber says the Bears need to look forward to the Seahawks

Marion Barber had 108 yards rushing and a touchdown run last week, but it was his mental miscues that would end up looming large in the Bears, 13-10, loss to the Broncos last Sunday in Denver. The Bears had taken a commanding 10-0 lead early in the 4th quarter when the Broncos scored a touchdown to close the deficit to three points. Late in the 4th quarter the Bears had a chance to melt the clock down to virtually no time on their last possession, but Barber made the mistake of running out of bounds giving the Broncos 53 seconds to try to tie the contest. That extra time gave Denver all they needed as Matt Prater drilled a 59-yard field goal to tie the game at the end of regulation.In overtime with the Bears driving in Broncos territory, Barber appeared to be breaking for a huge run before having the football stripped from him at the Broncos 34, and Elvis Dumervil recovered. The rest would be history as the Broncos capitalized on Barber’s fumble. 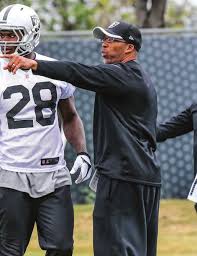 No.24 had never been a big fan of conducting media interviews during his time in Dallas and this policy wasn’t changing after this game. After being threatened by the NFL to speak to the media or be fined Barber spoke to the team’s official web site, giving the NFL world his thoughts on one of the toughest days of his NFL career.Marion Barber joined WSCR in Chicago with Zach Zaidman to discuss the Chicago Bears heart breaking loss to the Denver Broncos in overtime last week, his overall thoughts on his miscues in the Broncos game, what Caleb Hanie told him on the bench during overtime, rebounding from his performance against the Broncos this week against the Seahawks, going out of bounds when all the Bears had to do was run out the clock late in the 4th quarter against the Broncos, why he doesn’t conduct interviews all that often and his teammates embracing him in the locker room after the loss to the Broncos.

How tough was Sunday?

“I’m looking forward to this week. At practice yesterday guys are really excited about this next week and that’s really what it’s all about.”

You had a great game last week with 108 yards rushing and then a couple of mistakes at the end. What are your thoughts overall on the whole thing?

“My thought is get into this next week and just preparing as much as I can to be ready for this game of course.”

When Caleb Hanie sat next to you at the end of that game what did he tell you?

“I’m all about this week. I’m ready to go this week, today, tomorrow, and you know I am not the best at this stuff. Like I said with this interviewing, but yeah like I said guys just make sure guys is ready to go for this week and I still got the same type of enthusiasm and excitement that we need for this game.”

Is it tough to put something bad behind you. Do you look at this next game moving forward? Do you want to rebound from last game?

I know you don’t want to talk about it, but one of the crucial plays was when you went out of bounds:

“I’m not trying to be disrespectful man. I just move on and just bear with me.”

There are a lot of people wondering because they haven’t had the chance to hear from you, so why do you stay so quiet?

“I mean I have been like this all my life, really high school, I wasn’t a guy to be in the TV interview. Only when I be asked to do it. That’s kind of something that I hope people respect from me. It’s not like I don’t do it. I do, do a few [interviews], but I believe because of circumstances that took place a lot wanted to know, but like I said it is all about this week and doing what I can do to help this ball club win.”

Did you have to say anything after a game like that to your teammates in the locker room?

“Even after that a lot of guys here are great. That was a blessing and that’s what it’s all about at the end of the day because that’s who we are. I believe that being here even though it’s been for this short period of time, the fellas in there, you’ve got some big dogs, ‘Lach [Brian Urlacher], [Lance] Briggs, the offensive line,’ and it’s just great to have that going to the next game with that on your shoulders, knowing that guys have got love for you.”