After His Destruction of Brock Lesnar, Can Anyone Beat Cain Velasquez?

Going into his Heavyweight Title fight against Brock Lesnar, Cain Velasquez  was considered the underdog by many.After all he went into the fight against the “Baddest Man on the Planet.” Brock Lesnar ran his mouth the entire time, but if he was the baddest man on the planet going into the fight, what does that make Velasquez now? Cain not only beat Brock Lesnar, but he gave him the greatest beating of his life and made him look like anything but a world champion.Velasquez came into the fight undefeated, was well-rounded, and is now the UFC Heavyweight Champion.After his destruction of Brock Lesnar, there are very few fighters out there that look like a threat to Velasquez. Cain should get used to that belt being around his waist for a long time because his combination of speed, power, athleticism, toughness, wrestling, and endurance is unmatched by any Heavyweight in the fight game right now.Cain Velasquez joined the Fan 590 in Toronto with Andrew Krystal to talk about his win over Brock Lesnar, whether or not how he won the fight surprised him, who his next opponent will be, and talks about the support he has been getting since beating Lesnar. 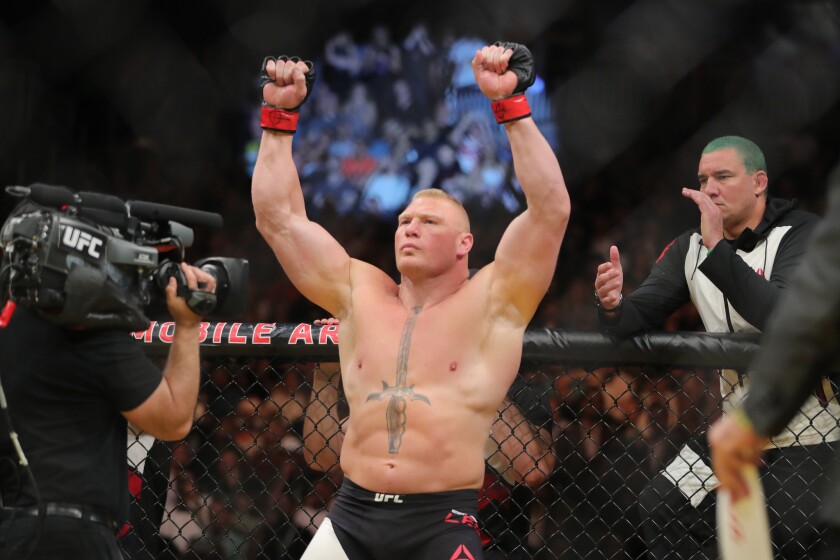 On the win against Lesnar:

On whether or not he was surprised the way that he beat Lesnar:

“No feeling of surprise. Tried to keep my composure and not get over-anxious. When he fought Shane Carwin, in that first round, Shane Carwin pretty much got super-tired from trying to throw so many punches when Brock was on the ground. I was in the same position with him and I was looking for the shots, trying to get those clean shots off and not blow my energy or throw wild punches.”

On his next opponent, Junior Dos Santos:

“With him, he’s a great standup fighter, he has great takedown defense, and he’s athletic. I think it will be a tough fight, but we’re looking for everywhere. We’re looking to strike with him, we’re looking to look for shots like we did with Brock. If the opening is there get the shots, control him on the ground if we can, but we’ll pretty much look to go everywhere with him.”

On the support he has gotten:

On why he thinks he beat Lesnar:

“I think my game plan. We knew he wanted to rush in and take us down. I knew once I got the takedown I was gonna get back up.”