After Brawling On The Ice, Domi Calls Probert A “Teddy Bear”

NHL tough guys: Fans love them, some young players want to be them and opposing players rarely really want to go up against them.Unless they are a fellow tough guy.In that case, the highlights are something special. And some of the greatest fights in NHL history involved Bob Probert and Tie Domi.Probert, who died Monday, was a tough guy who paved the way for Domi and others like them who are playing today. Probert finished his career with 163 goals and 221 assists, but will always be known for his brawling, where he incurred 3,330 penalty minutes in 935 games, the fifth-most minutes in NHL history.Tie Domi joined WSCR in Chicago with Dan McNeil and Matt Spiegel to talk about getting to know Probert when both of their careers were over, the art of the NHL tough guy and the respect they had for one another. 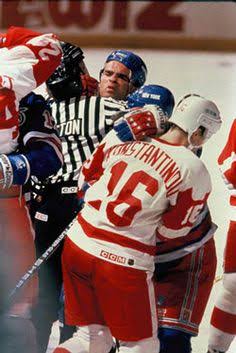 On his first thoughts on reflecting on the death of Probert:

“Well, I got to know him after our careers. The first thought I thought about was about his wife and his four children. We did Battle of the Blades last year together and I really got to know him well and got to see how much of a teddy bear he really is and how great of a father and husband he is. That’s the side I was really impressed by.”

On whether Domi had discussions with him about off-the-ice problems:

“I don’t think it’s appropriate to really talk about the things. We all have problems throughout our lives and throughout our careers. Some of us who are in the spotlight, who are athletes, we’re always exposed to things we do personally. … This situation here is a guy who really turned things around in his life and I would just like to talk about the good.”

On whether NHL tough guys are more susceptible to falling victim’s to life’s demons:

“I tried to use the guy who is the king of the castle. When I came in the league, he was the guy that everyone was gunning for. Once I got an opportunity to kind of establish myself, we both became the guys that everybody wanted a piece of. I really got to see what he was living with and the pressure and the stress. You’re pretty much the only guy in that dressing room that has to do that every night. You might have to. Sometimes you don’t. But everybody in that dressing room is getting ready to play hockey and you’re trying to get ready to play hockey, but also you’re the guy who has to answer the bell if somebody does something to one of your teammates. The stress and anxiety that goes through your mind, there’s no question it really wears on you. But you try to find ways to try and take your mind off it as much as you can.”

“We had respect for one another. He was a little smarter than me in the early days, especially. When we met with the commissioner at the time, we met with him the night before that game and Gil Stein said, ‘If you guys fight, you’re going to be suspended for 20 games, you’re going to be fined so much.’ So I’m thinking we’re not going to go the next night at Madison Square Garden til the second or third period. We both got thrown out there 17 seconds into the game, 21 seconds into the game, and Proby and I lined up next to each other and he said, ‘OK, Tie, let’s get it over with.’ I said, ‘Are you nuts? Let’s wait til later, Proby.’ That’s one of the memorable things. I should’ve known better, but he was the veteran guy that was a little smarter.”

On his health after his hockey career:

“I try to take care of myself as much as I can. I’m still getting treatment and massages to try and keep the body loose. I do spin classes and yoga to try and keep in shape. I don’t really want to let my body go too much, so I’m staying as fit as I can.”