When NFL fans wondered exactly how Adrian Peterson would bounce back from a devastating knee injury late last year, few probably figured he could put together one of the best rushing seasons in NFL history. Yet that’s just what the Minnesota back has done, rushing for 1,600 yards in the Vikings’ first 13 games. He’s got some work left to do, but he thinks he could still set the single-season rushing record, currently held by Eric Dickerson at 2,105 yards.Adrian Peterson joined The Dan Patrick Show to discuss believing he can rush for 2,000 yards, the best defense he’s seen this year, why he’s not surprised by his season, going after Eric Dickerson’s single-season rushing record, not being nervous about his knee despite coming back from injury and the NFL’s MVP race. 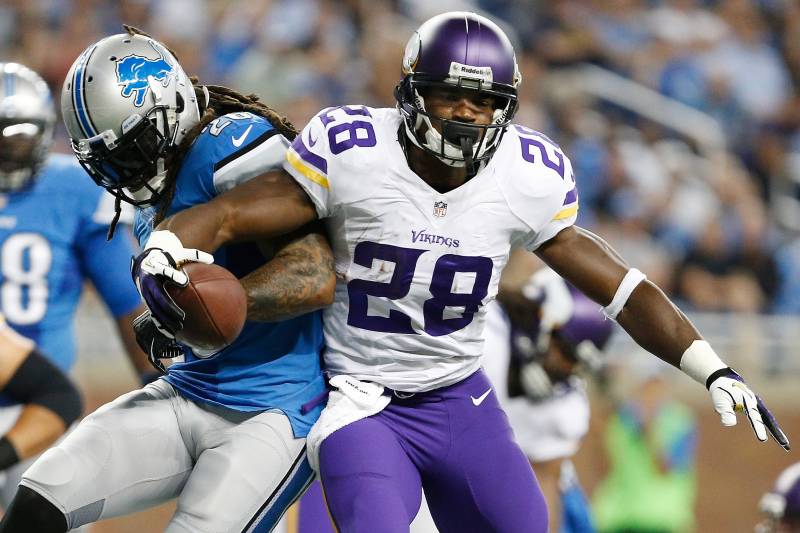 “Man, we’ve played some pretty good defenses. I don’t know. I would have to say probably the Bears. … I remember seeing the film and seeing 10 in the box sometimes.”

That’s the thing. You have 1,600 yards in an offense that is lacking a passing attack. How surprised are you by the season you’re putting together?:

“To be honest with you, I’m not surprised at all. We come in, we definitely want to run the ball, and it’s all about mindset. … Guys know, teams know, defensive coordinators know we’re going to run the ball. But you know what? We still have a job to do. This is our bread and butter and we stick with it.”

Do you think about your knees when you go to plant your foot on a running play?:

“Oh no. I don’t think about it at all. That’s the main thing … you’ve got to get to that point when you start cutting, and you start working to get that pop back in your cut and your plant, you’ve really got to attack it, man. You can’t be favoring it. You can’t be thinking you’re going to damage it more. … So, from that moment when you’re released to cut on it, you’ve got to hammer it out.”
Should Eric Dickerson be nervous?:
“I think so.”

Who is the MVP this year?:

“That’s a good question, Dan. I’ll say this: I play this game to be the best. My approach during the offseason is that, ‘Hey, I don’t want anyone to outwork me.’ … First and foremost, my mind is on getting to the playoffs and getting to the postseason. We’re 1-0 right now, as far as our last four games, and it’s in reach, so that’s our main focus.”