Aaron Rodgers has heard it all by this point. The Green Bay Packers quarterback has been asked about whether the team would suffer from a Super Bowl hangover, if too much talk of repeating keeps teams from doing that, and now he’s being asked if there’s any sort of jinx that goes along with being on the cover of Sports Illustrated this week. Rodgers isn’t buying it, or any of those topics for that matter. He takes the unbeaten Packers to San Diego this weekend to take on a Chargers team coming off a ridiculous loss on Monday Night Football. 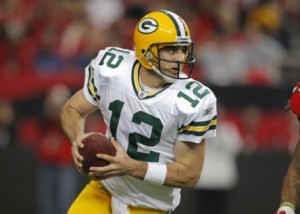 Aaron Rodgers XX Sports Radio in San Diego with Darren Smith to discuss the bye week, his role in life as an underdog, why he hasn’t gotten to a point where he’s satisfied, playing the what-if game, his title-belt celebration, the Sports Illustrated jinx and the San Diego Chargers.

How was the bye week?:

“It was good. It was relaxing. I got to kind of get away and sleep in a couple mornings. I also went down to Nashville and saw my little brother, who plays for Vanderbilt University. They had a tough one, had Arkansas, a top-10 team on the ropes, and couldn’t finish it off, but it’s fun to watch him play.”

Do you still feel like you are living the underdog story at this point?:

“I think that’s been something that’s been important for my development as a player and the chip on the shoulder that I played with and that motivation, feeling like I always had to prove myself. … I’ve just enjoyed the opportunity to kind of work for the things that I’ve been able to achieve and also knowing that my story has kind of been built on making the most of my opportunities.”

How do you avoid the satisfaction from setting in at this point?:

“I’m a competitor. I hate losing at anything, from ping pong to chess to a video game or watching Jeopardy with my roommate, trying to get more answers than him. I’m never satisfied with where I’m at and how I’m playing and always looking for ways to improve. … I’m a fierce competitor and I want to improve all the time.”

Do you ever play the “what if” game, like what if you got a scholarship out of high school or what if the 49ers would have drafted you with the No. 1 pick?:

“Not really. Thankfully, we’re creatures of habit. We stay focused on the here and now and the week-to-week stuff and don’t really get into that stuff. At times you think of those things a little bit, but I’m confident I’m supposed to be in Green Bay and what happened has made me a better person and a better player.”

Does it bother you when people mock your title belt touchdown celebration?:

“No, not at all. I love it, I really do. Jimmy Graham, the talented tight end for the Saints, did it opening night here in Green Bay this season. Different guys have done it from time to time. … I got a text from somebody that made me laugh late last season. It said, ‘You know you’ve made it when … you have your celebration copied.’ That whole celebration started as just a device to taunt our own No. 1 defense to get them to play harder in practice. … Now it’s bigger than I ever thought it would be.”

You’re on the Sports Illustrated cover this week. Do you buy into the jinx?:

“No. I mean, I think if there’s anything that we’ve learned winning the Super Bowl, there are a lot of terms that have been made up the media to try and describe different things that happen in a football season. … I’m referring to things like ‘Super Bowl hangover’ and worrying about too much talk of repeating. … I know we’re going to prepare hard to give the Chargers a great game and whatever happens is going to happen.”

What do you see from the Chargers?:

“I still see a really talented defense. I think they’ve got a good combination of young players and guys with a lot of experience. … On the other side of the ball, they’ve got a lot of weapons and a big-time quarterback in Philip, so we know what kind of game it’s going to be. It’s going to be a tough one. I’m sure they’re disappointed about the Monday night loss.”

Phil Jackson: I Do Wanna Push Through For One More Year